Former PDC World Championship runner-up Simon Whitlock was eliminated in the second round by Martijn Kleermaker 3-1 at Alexandra Palace. ‘The Wizard’ is a popular figure on the tour, but has experienced a rough time of it lately. His 30-year-old opponent stymied a Whitlock comeback with a ruthless fourth set to advance to the third round.

The Dutchman started confidently, taking the first two legs before Whitlock answered with a 180 in the third. The Australian would turn the trick again in the fifth leg, but it was not enough to stop Kleermaker from taking the set. 2-2 in the first four legs of the second saw Whitlock needing to hold his throw to keep a foothold in the match. He did so superbly, starting with a 121 and also notching a 180 in levelling up the game.

The world number 20 missed chances and was punished for it in losing the third, though he did manage an eye-catching checkout on bullseye in the third leg. This would sadly prove to be the highlight for the bearded legend, as Kleermaker was efficient and aggressive in taking the fourth and ultimately deciding set. After missing out on the 2021 Championship due to a positive COVID-19 test, this headline win at Ally Pally was a sweet victory.

PDC Darts
@OfficialPDC
𝗪𝗵𝗶𝘁𝗹𝗼𝗰𝗸 𝗶𝘀 𝗢𝗨𝗧!
Martijn Kleermaker gets over the line to beat 20th Seed Simon Whitlock and book his place in the Third Round.
He's enjoying a dream debut at Ally Pally so far!
#WHDarts 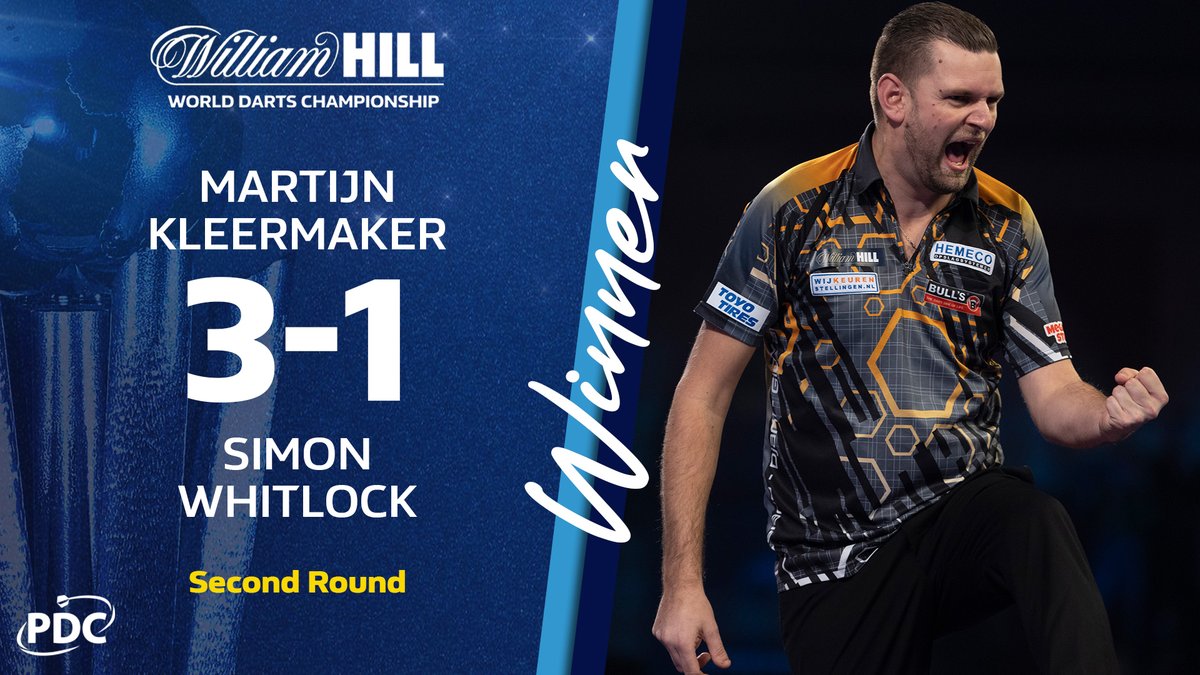 Earlier in the evening, Nathan Aspinall came back from 2-1 down to beat Joe Murnan 3-2. The world number 10 hit his stride as the contest wore on, with a 180 before a 41 checkout in the fourth set seeming to turn the tide.

There were several awkward moments, with both players struggling on finishes when Steve Beaton fell 3-1 to Kim Huybrechts. After two sets, the players had combined to miss 40 darts on doubles, as each man struggled for rhythm and accuracy.

Thankfully, the play significantly improved as the game went on. A 180 in the first leg got Huybrechts going, and from that point, he was clearly superior to the ‘Bronzed Adonis’. Beaton showed signs of life with a nice 146 checkout to take the second leg, but a 180 in the third settled the Belgian’s confidence and he was able to wrap up proceedings from there. Huybrechts now faces the unenviable task of facing reigning champion Gerwyn Price in the third round.

The PDC World Championship got its first tiebreaker, when Dirk van Duijvenbode beat Boris Koltsov 3-2. The Dutchman was overcome with emotion after hitting double 19 to clinch a thrilling match, before moderating his reaction out of respect for Koltsov. A lovely gesture of sportsmanship to cap a superb game of darts.