Cricket
News
All the action from second T20 international between England and Australia
Shane MacDermott
12:36, 22 Jan 2022

Both sides got a point apiece in the multi-series Ashes and holders Australia lead 3-1 after a convincing win in the first game.

The third and final T20 takes place in Adelaide tomorrow, before a one-off Test and three one-day internationals.

Rain scuppered the start to proceedings and the match was already reduced to just 14 overs per side when play finally commenced at the Adelaide Oval.

After successfully chasing 170 with three overs to spare in the first game, the Aussies won the toss and decided to bowl once again.

England altered the balance of their side by picking an extra bowler after watching the Aussies smashed them for 10 an over in the first game.

Off-spinner Charlie Dean, who impressed during her maiden ODI series against New Zealand last year, was handed her T20I debut. She replaced Maia Bouchier to strengthen their bowling stocks.

England’s openers Danni Wyatt (14) and Tammy Beaumont (six) got the visitors to 25/0 when another heavy shower forced them off the field, and play never resumed. 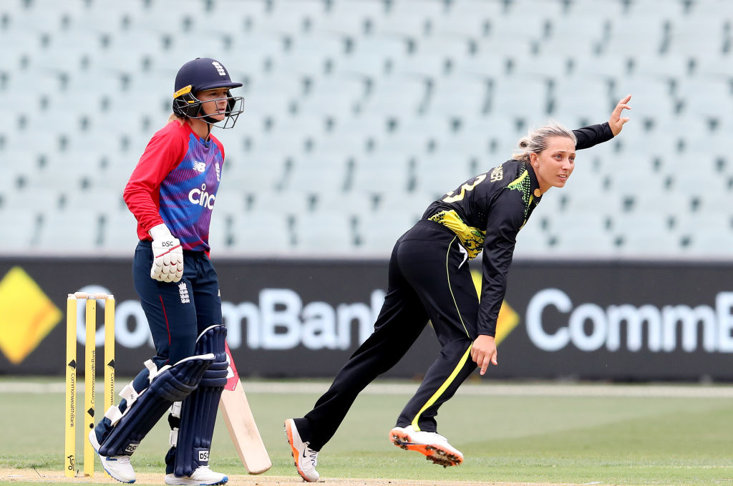 The forecast is similar for Sunday’s final T20 game and England all-rounder Nat Sciver said: "We have to come to the ground switched on and ready for any length of game.”

Aussie star all-rounder Ellyse Perry was once again a glaring omission from the hosts’ XI after two tough years in the shortest format of the game.

But the 31-year-old is expected to return for the Test match and the ODIs which follow the T20 leg of the multi-format series.

Captain Meg Lanning said: “It shows how much the game has improved and the depth we have in Australian cricket. Ellyse is a great of the game and always will be.”

But Lanning’s side have injury fears over fast bowler Tayla Vlaeminck. The pace ace was ruled out of the second game with a sore right foot, the same foot that she suffered a stress fracture which forced her to miss the 2020 T20 World Cup and left her on the sidelines for a year.

The 23-year-old bowled quickly in the opening game and hit Beaumont on the helmet in a hostile opening spell. But she was in a moon boot and her participation for the rest of the series is in doubt.

Four points are on offer for winning the Test at the Manuka Oval in Canberra, with two points each for winning the ODIs. England are bidding to reclaim the urn for the first time since 2014. They suffered heavy defeats in 2015 and 2019, whilst the 2017 edition ended in a thrilling 8-8 draw.