Arsenal kept their grip on third place in the Women’s Super League with a 2-0 win over Brighton on Sunday. The Gunners are level on 41 points with Manchester United who hammered Tottenham 4-1 but have a game in hand as they bid to qualify for the Champions League.

Jordan Nobbs opened the scoring for the north London club on 27 minutes, firing home past Megan Walsh and grabbed a second with 13 minutes left on the clock, tapping home a Beth Mead cross after a lightning counter-attack. However, it wasn't all plain-sailing.

Arsenal rode their luck at times but the Seagulls failed to capitalise. Gunners boss Joe Montemurro believes his side can learn lessons from the game and insisted, “I don't think anxiety came into our game, probably just a bit of frustration. 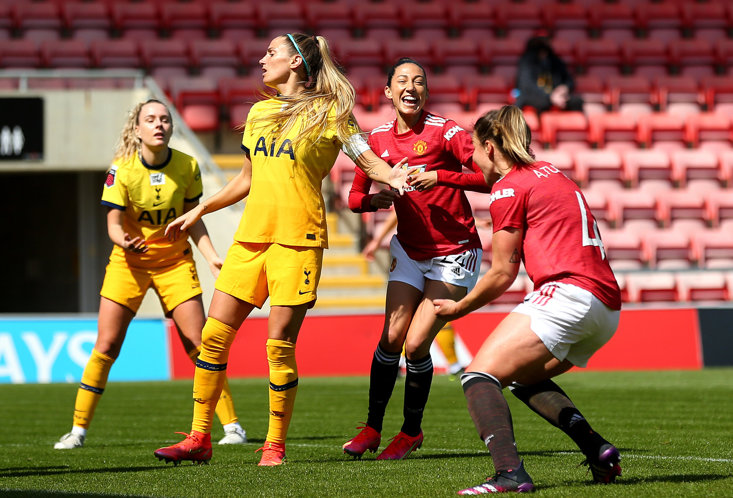 “The reality is the only chance they created was through our error, through our mistake, and there was a couple of them - just wayward passes.

“Sometimes these things happen in the ebbs and flows of seasons and I'm going to take it as a positive - a little warning, going into Wednesday night [against West Ham].”

United, meanwhile, dispatched easily of a Tottenham side stuck in eighth place. Ella Toone put the hosts ahead after only nine minutes before Christen Press headed home to double their advantage and it was three after only half-an-hour when Jess Sigsworth scored.

Toone then scored from the penalty spot early in the second-half to complete the rout. Spurs did get a stunning consolation with only seconds remaining as Alanna Kennedy curled a free-kick into the back of the net from 25 yards out but the win had long been United’s.

The wins saw Arsenal and United move ten points behind leaders Manchester City who drew 2-2 with second-placed Chelsea on Wednesday.

At the other end of the table, bottom two Aston Villa and Bristol City played out a 2-2 draw on Saturday. A day later West Ham and Birmingham each earned draws, against Everton and Reading respectively, to move two points clear of the bottom.