Wonderkid, winger, striker, Gunner, enigma. Theo Walcott has been all these things and more. The Southampton veteran turns 33 today, and his career is a hard one to categorise. Walcott made 397 appearances for Arsenal, scoring 108 goals, but opinion is split amongst the fanbase over whether he counts as a club legend. The Stanmore-born star has 47 England caps, but the majority arrived in the listless hinterland between the demise of the Golden Generation and the successes of the current side. Which all begs the question, just how good was Theo Walcott?

To hear the court of popular opinion tell it, he was not as good as expected. Walcott emerged as a hot prospect from the Southampton academy, and was snapped up by Arsenal after just half a season in the Saints first team. The fact a manager as seasoned and successful as Arsene Wenger saw fit to part with up to £12 million with add-ons for a player with just 23 professional games under his belt augured well for Walcott. It also attracted an unreal amount of attention, and the hype train would only gather pace that summer.

Despite Walcott having not yet debuted for Arsenal following his January move to Highbury, England manager Sven-Goran Eriksson named the 17-year-old in his squad for the 2006 World Cup. His inclusion propelled Walcott from promising starlet to national celebrity, marking him out for the same sort of attention teenagers Michael Owen and Wayne Rooney had received in years past. While Walcott became England’s youngest-ever senior player during a 3-1 win over Hungary in a pre-tournament friendly, he did not feature at the World Cup in Germany. Eriksson defended the move as a way to give Walcott valuable experience for future tournaments, but it felt like stunt-casting. It quickly became clear Sven had no intention of actually letting Walcott onto the pitch.

After starting the following campaign well for his club, a recurring shoulder problem hindered the returning Three Lion’s progress. The complaint would follow him for much of his career, with frequent surgeries keeping him on the sidelines. This would be the story of much of Walcott’s tenure.

There were dizzying highs, such as the 60-yard run where he beat four Liverpool players to assist Emmanuel Adebayor in the Champions League quarter final. There was also an inspirational hat-trick as Arsenal battled back from 4-0 down to beat Reading 7-5, including a last-gasp equaliser to take it to extra time, and the strike that put them 6-5 up. The player’s Emirates peak arrived with 21 goals and 16 assists in the 2012/13 season.

So if Walcott could produce moments of magic in an Arsenal shirt, and was their top scorer in a campaign where he also got well into double figures for assists, why is he not considered a Gunners great? One issue is consistency. In the season following that prolific year, Walcott played just 18 times and scored six goals. In fact, he would only get into double figures for goals once in the five years that followed. 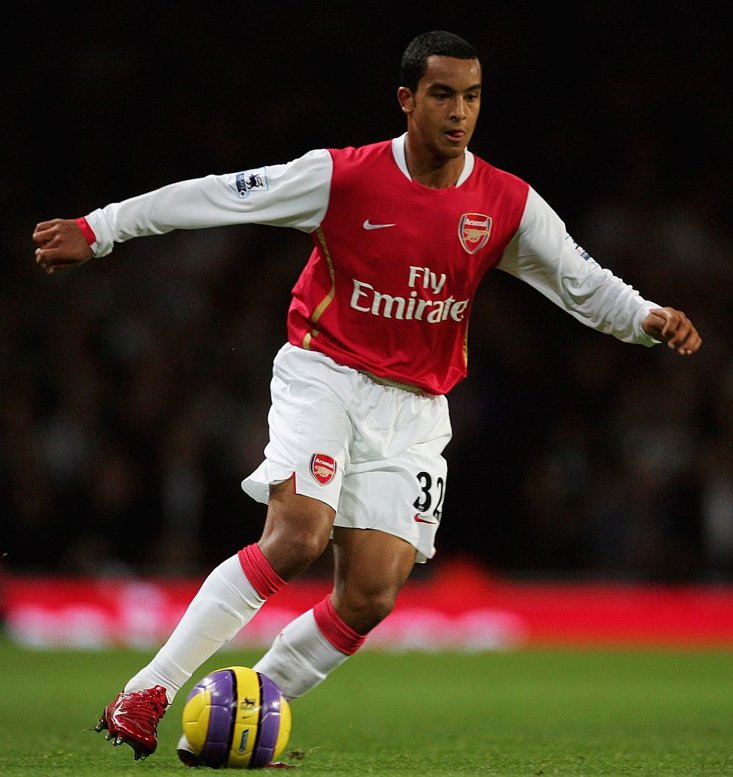 a star is born: a young walcott lights up the emirates

Walcott was also a twin-victim of injuries and his own adaptability. The shoulder complaint and other ailments limited Walcott to less than 30 Premier League appearances in all but two of his 13 Arsenal seasons. Meanwhile, due to his ability to play anywhere across the frontline it was often difficult for Walcott to nail down a consistent starting place. There was conjecture over whether he was a winger or, as he saw himself, a centre forward in the mould of converted wide man Thierry Henry. It was a similar dilemma to the “Is Wayne Rooney a number nine?” debate of the time, but Walcott was not able to navigate it as elegantly as his Manchester United counterpart.

Walcott’s 12-year association with Arsenal ended not with a bang, but with a whimper. The winger found himself falling down the pecking order in North London, playing just six Premier League games in the first half of the 2017/18 season. At 28 years of age, Everton felt the England star had plenty to offer, and signed him for £20 million that January.

A fresh start at Goodison Park appeared to be just the ticket for Walcott, who scored three goals and registered three assists in his first 14 league games. This was to be the high watermark of his three-and-a-half year spell though. The following seasons saw Walcott provide just eight goal contributions, and the following season he mustered just six.

A feel-good loan to Southampton followed, bringing Walcott’s career full circle. The fans appreciated his contributions, and Walcott signed permanently on a two-year deal. He has featured just 12 times this season, with his last appearance coming a month ago. At the age of 33, a return to the club where his journey began as an experienced face to impart wisdom to the next generation is not the worst gig in the world. Walcott certainly has a lot to teach the new generation of Saints.

Is Theo Walcott a cautionary tale of too much too soon? Not really. He has never acquiesced to the excesses of the modern footballer, and remains a humble presence. Despite injury troubles, he has played 539 professional games and scored 127 goals. The vast majority of these have come while playing for one of the biggest clubs in the country. He may not be an Arsenal legend to rival Tony Adams, Patrick Vieira or Thierry Henry, but Walcott is an important part of the history of the Gunners. A loyal servant who produced some legendary moments in red and white.

His career since leaving the Emirates has been mixed, but he remains a Premier League footballer at the age of 33. Theo Walcott never quite hit the heights the famously expectant English fans and media asked of him, but he never plumbed the depths of a flop either. The pacy forward enjoyed a highly-respectable career for club and country. That in itself deserves to be applauded.