St. James’ Park is one of the biggest football stadiums in England. The home of Newcastle United since 1892, the iconic lop-sided ground can now house 52,388 football fans, with the most congregating in the main stand that towers above the dugout and illuminates the Tyneside skyline.

First erected in 1988 after the previous Edwardian structure was demolished, it is named after the club’s first truly iconic number nine and their adored son, John Edward Thompson Milburn: ‘Jackie’.

A winner of three FA Cups with the Magpies in the early 1950s in a blistering period that marked one of Newcastle United’s most successful ever eras, the late Jackie Milburn remains the standard-bearer for all who have since entered the arena on the hill sporting the black and white, a player who brought glory to the city in the immediate post-war years.

Born in 1924, the future had almost been exactly set out for the young Milburn in the historic mining towns of the north-east. His eventual avoidance of the pits was helped by him being given his first brand-new football boots at around the age of eight. Milburn had an exceptional left-foot, which he trained ferociously, building a famously remarkable pace quite appropriate for the man whose initials spelt ‘J.E.T’. 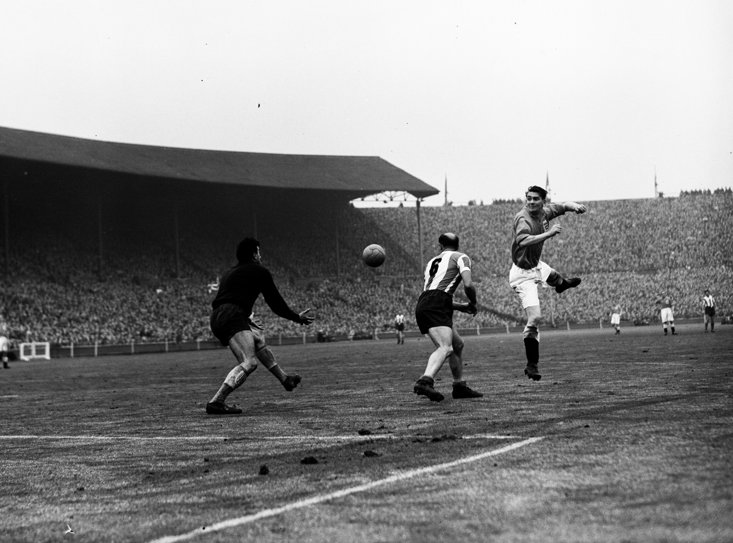 Milburn in action for England against Germany

Their sister, Elizabeth "Cissie" Milburn, was the mother of 1966 England World Cup heroes Jack and Bobby Charlton, the latter later also having the honour of his second cousin in having a football stand named after him, at Old Trafford.

Aged 19, when the time came to apply for trials with Newcastle United, Milburn borrowed a pair of boots from a friend, spending three weeks dedicated to breaking them in, and got another to handwrite a letter to the club secretary. Granted an audition, he would subsequently score six goals in his trial match. The pit was swapped for the pitch. A superstitious man, he prepared for a match by eating two pork pies and downing a bottle of pop, something he had maintained since his trial days.

On route to his first FA Cup win, in 1951, he produced the third goal in a 13-minute comeback 3-1 win over Bristol Rovers in the sixth round. The eventual Wembley occasion against Blackpool would see him face off against, and best, another legend of the game, Stanley Matthews.

Not intimidated by the occasion or the opponent, Milburn scored both goals in the 2-0 win, the second an absolute thunderbolt into the top corner, and Newcastle had their first cup win in two decades. A year later they defended it with a 1-0 win over Arsenal, the first time the trophy had been retained since Blackburn Rovers in the 1890s.

A 4-2 quarter-final win against Portsmouth to get there had seen Milburn score a famous hattrick.

On May 7, 1955, 100,000 people who had thronged through the Twin Towers of Wembley Stadium watched Jackie Milburn kick-off against Manchester City. Newcastle won the match 3–1 and as a result won the FA Cup for the third time in five years, and the sixth time in all.

Always quick off the block, Milburn scored Newcastle's first goal after just 45 seconds, heading in Len White’s corner and setting a new record for the fastest goal scored in an FA Cup Final (it would eventually be broken in 1997). 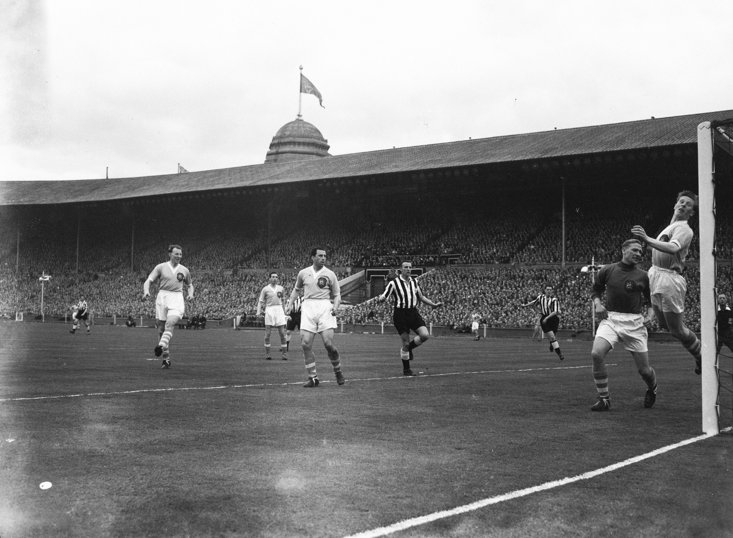 Milburn scores inside 45 seconds in the FA Cup Final

Nicknamed 'Wor Jackie' by the Toon faithful, he left Newcastle United two years later in 1957 aged 33 as the club's record goalscorer, with 200 (he scored another 38 goals in wartime fixtures).

A working-class hero through and through, Jackie Milburn was famously humble, modest, and unassuming. When he was made a Freeman of Newcastle on the same day as the Cardinal Hulme, he was flabbergasted when the cardinal asked for his autograph.

“Being out on the field there, the people who watched, they wanted to be in your position,” Milburn would later recall of the effect the fans had on him as a footballer, “It’s as simple as that. I was delighted but I wouldn’t have been half the player without the encouragement of the onlooking people. They made me for what I was.”

He was born and died in Ashington, Northumberland where a statue in tribute now lies outside a multi-million pound sports centre. After his death in October 1988, aged 64, a reported 30,000 people - Ashington natives, Newcastle supporters, football fans - observed the funeral procession making its way from his red-brick terraced house through Tyneside to St Nicholas Cathedral.

The cortege of course passed a silent St James’ Park, where his ashes were later scattered. A statue depicting the player in mid-strike also stands outside the ground's Gallowgate End, facing the city centre of Newcastle.

When Alan Shearer joined his boyhood club Newcastle United in 1996, there had been only one shirt number he wanted: the fabled number nine adorned famously on occasion by his spiritual predecessor, Jackie Milburn. 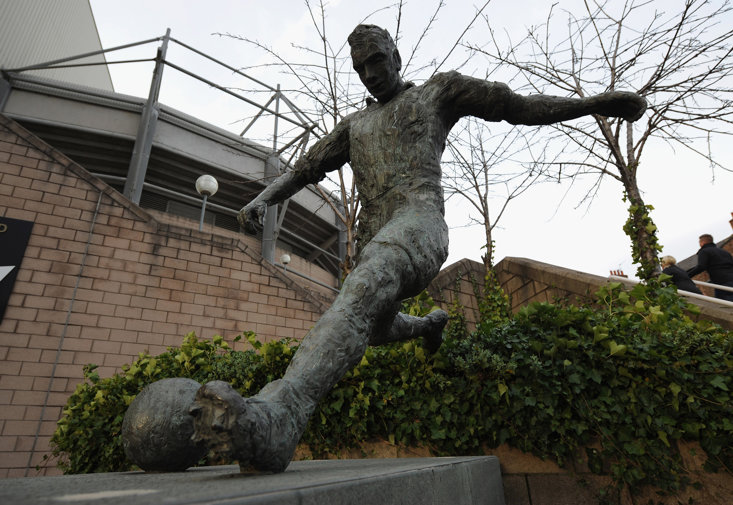 On February 4, 2006, after almost a decade at the club Shearer scored his 201st goal for Newcastle United in a 2-0 win over Portsmouth, breaking Milburn’s five-decade long goal-scoring record which for the Toon had stood for the best part of five decades. Jackie Milburn’s son, Jack congratulated Shearer as he hit his milestone in surpassing the record of his father.

“To compare my dad and Shearer is like trying to predict whether Muhammad Ali would beat Mike Tyson,” Jack said at the time.

“But one thing is for sure, they would have made a great fantasy football partnership.”