Football
News
The Three Lions could face Scotland or Wales in Group B
Simon Lillicrap
18:31, 01 Apr 2022

Gareth Southgate’s England side have avoided the big guns in the group stages of the Qatar World Cup, but could face Scotland, Wales or Ukraine, depending on who wins their play-off in June. The Three Lions will play their opening game against Iran and they will then take on the USA, who the three Lions famously lost to in 1950, and drew with back in 2010, before rounding off Group B with a potential tie against a home nation.

England drew 0-0 with Scotland at Euro 2020, beat Wales 2-1 at Euro 2016 and beat Ukraine at Euro 2012, all in the group stages. Expectations will now rise ahead of the tournament in November, with Southgate’s side one of the pre-tournament favourites to lift the World Cup.

Elsewhere, Group E has seen Spain paired with Germany, along with Japan and Costa Rica or New Zealand, while Group H is the infamous group of death on paper. Cristiano Ronaldo, in what will likely be his last World Cup, will face Ghana, Uruguay and South Korea in a tough looking group.

Hosts Qatar will open the tournament against Ecuador and are joined by AFCON champions Senegal and the Netherlands in Group A, while England are likely to be in action on the opening day of the tournament - although full locations and times are yet to be determined.

Lionel Messi’s Argentina will take on Saudi Arabia, Mexico and Poland while current holder France will take on Denmark, Tunisia, and either Peru, Australia or the UAE. Canada, surprise qualifiers, have been placed with Belgium, Morocco and Croatia while Brazil will face Serbia, Switzerland and Cameroon.

So England can now begin their preparation for Qatar 2022. And the group could end with a home nations clash, which would add spice to what should be a thrilling tournament. 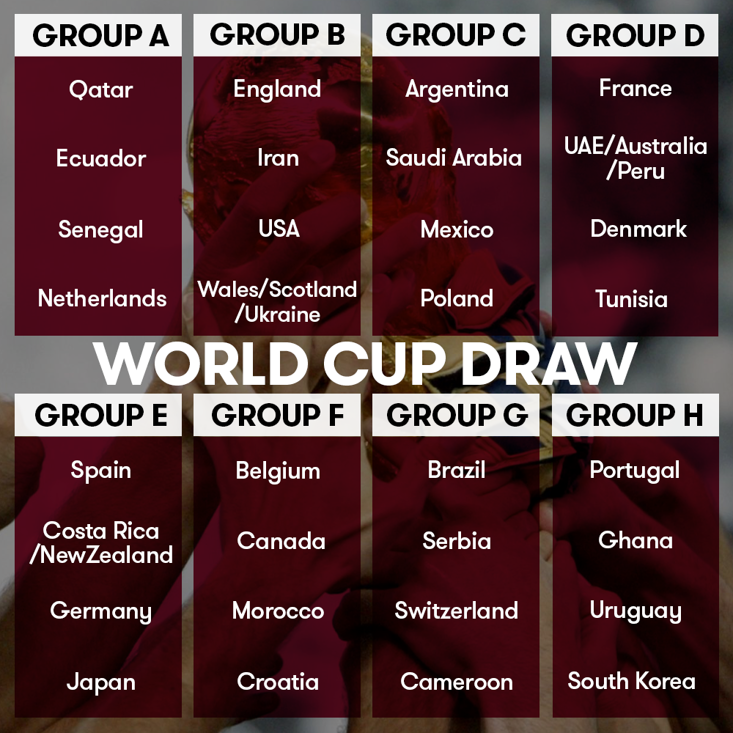