Could Sergio Ramos really be on the verge of ending his long association with Real Madrid?

The Spanish defender is under contract at the Santiago Bernabeu until 2021 but has hit the headlines with reports that he has now asked Los Blancos president Florentino Perez for a transfer away from the club (SkySports). Manchester United, Liverpool, and the Chinese Super League have all been mooted as potential destinations for the Madrid captain.

Ramos has proved himself as one of the best defenders - both at club and country level - in  the history of the game, with an enviable trophy cabinet that few could better. Here’s the great Spaniard’s breakdown by numbers.

1 - World Cup, won with Spain in 2010 in South Africa, the first time the country had won the competition.

3 - Back-to-back Champions League titles with Real Madrid between 2016 and 2018. Ramos played every single minute in each of the finals.

4 - La Liga titles in his time in the capital, with two in successive in his second and third seasons at Madrid. In contrast, Barcelona have won nine during his time at Real.

8 - Inclusions in the UEFA Team of the Year, the third most appearances in history. The last time he didn’t feature was 2011. 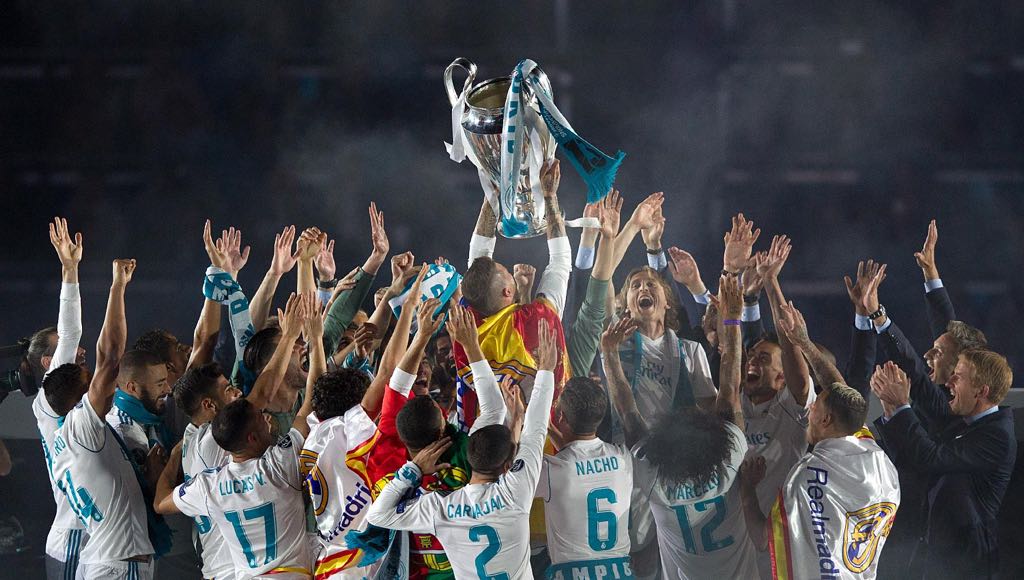 15 - The number shirt he wears for Spain, in contrast to the number 4 he wears for Real Madrid. This is in tribute to the late Antonio Puerta, a player who came through the Sevilla youth system with Ramos and who tragically passed away in 2007.

18 - The age Ramos made his debut for the Spanish national team.

20 - Major honours across his Real Madrid career. As well as the aforementioned, he has helped Los Blancos to two Copa del Reys, and three Supercopa de Españas.

37 - Yellow cards collected by the defender in the Champions League, to go along with his three reds. Ramos is the recipient of the most bookings in the competition’s history.

84 - Goals for Los Blancos, the highest for a still active defender in a top European league.

93 - The minute he scored the equalizer for Real Madrid in the 2014 Champions League final against Atletico Madrid, taking the game to extra time at the Estádio da Luz in Lisbon. Real would go on to win 4-1 and claim their 10th European Cup, and their first in 12 years. Ramos would be voted the Fans Man of the Match for his heroics.

100 - Caps at the age of 26 years, 11 months and 22 days, making him the youngest player in the national team set-up to reach the landmark.

606 - Appearances for Real Madrid across all competitions, the fifth-highest in the club's history.

82,000 - Views in two days for his summer 2018 banger ‘'Otra Estrella en tu Corazon' with singer Demarco Flamenco. The song translates to ‘Another Star In Your Heart’ and was released ahead of Spain’s World Cup campaign in Russia. Spain exited the competition in the Round of 16 to the hosts.

535,000 - (and counting) bitter Liverpool fans who have signed a change.org petition ‘UEFA & FIFA should punish Sergio Ramos for intentionally hurting Mohamed Salah’ after the Reds’ humiliation in the Champions League in 2018. The Spaniard was accused of elbowing the Egyptian. Real won 3-1.

27,000,000 - The Euros it cost Real Madrid to purchase the defender from Sevilla, making him the most expensive Spanish defender at the time.

Football on BT Sport
@btsportfootball
Fourteen years and over 600 appearances later ðŸ˜²
Might we have seen Sergio Ramos in a Real Madrid shirt for the last time? 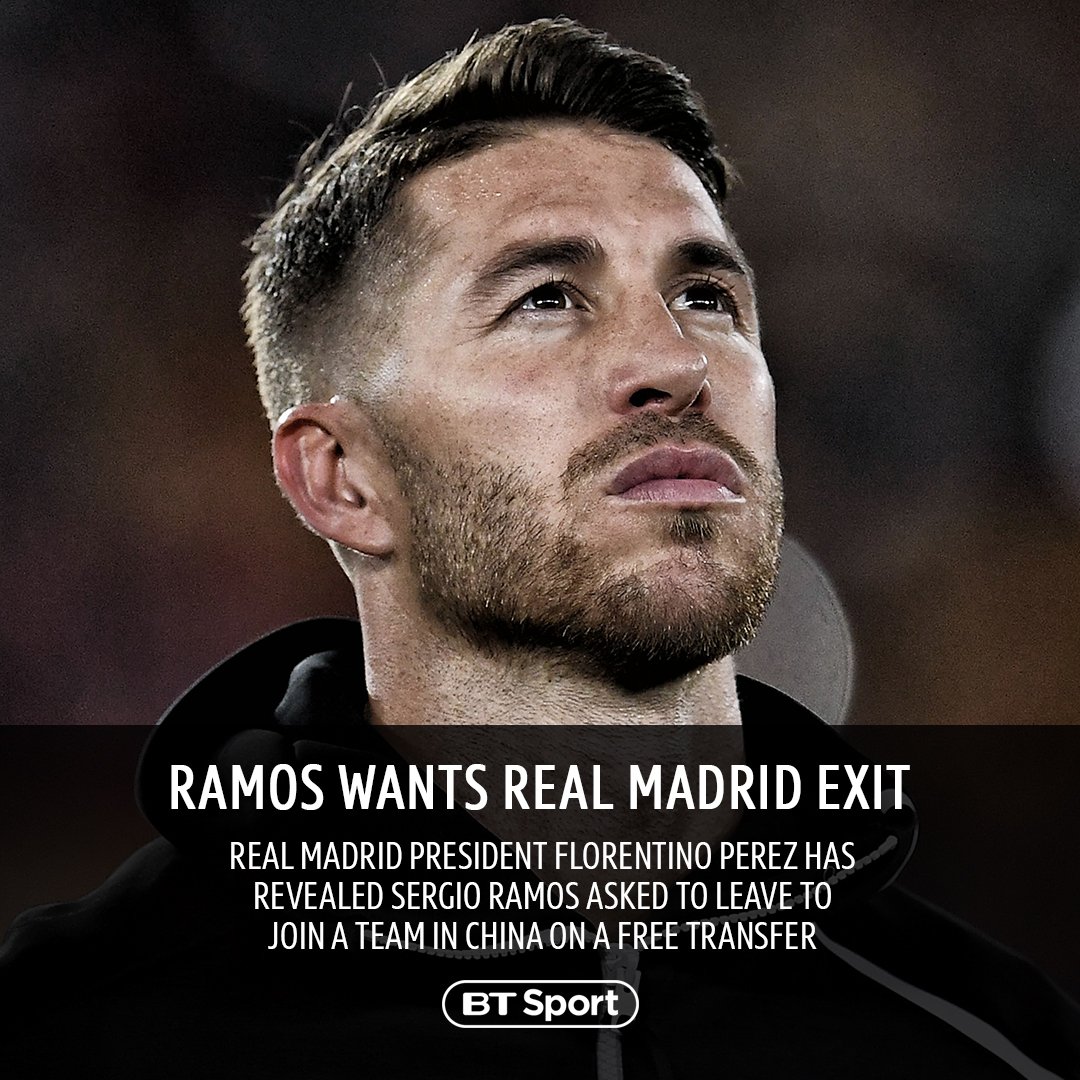 20
129
More
football
The Numbers That Prove The Women’s Super League Is The Best...
“We can say hand on heart we are the best league because we really are. All the best players want [ ... ]
football
Podcast Review - The Glenn Hoddle Footy Show
A quarter of a century since he last kicked a football professionally, and 14 years after his last coaching [ ... ]
football
Book Review - How To Run A Football Club: The Story Of Our National...
With an extended lockdown threatening the existence of a substantial portion of the United Kingdom’s [ ... ]
football
Thiago, Kalvin Phillips And The Premier League ‘Quarterbacks’...
Thanks for reaching out. You do the math. My bad. Americanisms, you gotta love ‘em. We’ve [ ... ]
football
Wayne Barton's Book On David Beckham Highlights Golden Balls'...
When historians look back at the sports scene at the turn of the millennium, there will most certainly [ ... ]
football
Rosé For Rodriguez, A Bollocking For Bilic, Five Stories You...
Managers can’t manage masks, fans are finding new ways to hail their heroes, and Jurgen Klopp [ ... ]
football
The Covid Defying Smart Helmet That Could Help Unite Football...
After the longest season in history, a mercifully short reprieve for players to catch their breath has [ ... ]
football
Get An Edge On Your Rivals This Season With The Fantasy Premier...
What are you this year? ‘Lallanas in Pyjamas’? ‘Murder on Zidane's Floor’? [ ... ]
football
Neymar's Handbags, Shy Guy Jose, And Other Football Stories...
Just like that, we’re back in the room. There’s new rules (on and off the pitch), and renewed [ ... ]
football
Celebrating The Return Of The Premier League With Its Best Ever...
After the shortest pre-season on record, even if it has felt to some of us like the longest ever, Premier [ ... ]
football
Lionel Messi Teams Up With Budweiser To Inspire Tomorrow's Footballing...
Lionel Messi, for all you do, this Bud’s for you. We’ve got to admit, it’s got a certain [ ... ]
football
From 007 to 46 Million Followers, Ten Facts You Never Knew About...
Everton finally announced the signing of James Rodriguez on Monday evening, after the Colombian superstar [ ... ]
football
The New Liverpool Book With A Groundbreaking View Of The Shankly...
September should always hold a special place in the hearts and minds of Liverpool Football Club and [ ... ]
football
The Questions We Want Answering After Watching All Or Nothing:...
“You have to be a bunch of bastards!” Annnd with that, we’re hooked. The last day [ ... ]
football
Football History Comes To Life With The Guardian’s Forgotten...
For much of 2020, the general consensus amongst the sporting community has seemingly been the desire [ ... ]
football
Book Review - Close Quarters: An Extraordinary Season On The...
He has been called the luckiest journalist in the world. When award-winning sportswriter Neil Harman [ ... ]
football
Work Out Like A Chelsea Player With The Most Advanced Football...
It claims to be the most advanced football training experience ever - imagine being trained by world-class [ ... ]
football
Blue Moon, Bubbles & Delilah - How Football Clubs Got Their...
Liverpool and Celtic fans both enjoy spine-tingling versions of ‘You’ll Never Walk Alone’ [ ... ]
football
The Lionesses Who Helped Lead The Charge In Lyon's Coupe De...
For the second time in less than a fortnight, Olympique Lyonnais and Paris Saint-Germain faced off in [ ... ]
football
Five Premier League New Boys That Are Set To Take Next Season...
A swift summer transfer window is on the cards, with just 48 days between Premier League seasons due [ ... ]
football
Bobby Robson And The Most Glittering Chapter In Ipswich Town’s...
Few in Ipswich could have predicted what was to come when Bobby Robson replaced Bill McGarry at the [ ... ]
football
How Tearing Down The Twin Towers Destroyed The Magic Of Wembley
On July 26, 1998, plans for a new Wembley were revealed to the world, promising a national stadium [ ... ]
football
Here's To The 2019/20 Premier League Season: Five Moments That...
It all began on August 9, 2019. 353 days later, a fortnight shy of a full entire year, the 28th Premier [ ... ]
football
Why Figo To Madrid Is Still Football's Most Controversial Transfer...
We’ve had Neymar, Sol Campbell and Carlos Tevez but on this day in 2000, Luis Figo completed the [ ... ]
football
Remembering Laurie Cunningham: The Football Pioneer Whose Legacy...
In 2016 the English Heritage scheme erected a blue plaque in Stroud Green, North London to celebrate [ ... ]
football
Book Review - King Eric: Portrait Of The Artist Who Changed...
Leeds. Irwin. £1million. Title. Double. Palace. Kick. Ban. Seagulls. Return. Liverpool. Double. [ ... ]
football
Replacing Rapinoe And Morgan? The Ladies Who Can Light Up The...
Write off 2020. The best thing about it is remembering how good 2019 actually was. One of the undeniable [ ... ]
football
Wembley Woe: When England Lost To Germany At Euro ‘96
In the summer of 1990 England tasted their first ever penalty shootout heartbreak when they went out [ ... ]
football
Get Ready For A Nostalgia-Fest With Italia '90 Podcast Vincerà!
Hosted by Mark Godfrey and running from June 8th to July 8th, Vincerà! is a 24-part podcast series [ ... ]
football
Harry's Heroes, Vinnie Jones And Revenge At The Battle Of San...
When Vinnie Jones started crunching San Marino players left, right and centre, it was clear the friendly [ ... ]