As the world No1 and winner of the recent French Open for a second time, Iga Swiatek has been handed the honour of opening play on Centre Court on Tuesday – as the surprise retirement of defending champion Ash Barty meant the usual protocol and etiquette could not be followed.

While no one could argue with the way Poland’s Swiatek is tearing up the women’s game at the moment, having put together a phenomenal 35-game winning streak, even that decision attracted controversy in the form of sympathy for Simona Halep, who through Covid and then injury never got to enjoy that time-honoured ritual.

It is understood even Australian Barty herself lobbied on Halep’s behalf, having herself benefited from the Romanian’s injury last year to perform the same ceremonial function in the year she went on to lift the trophy.

But none of that was any of red-hot favourite Swiatek’s doing. The 21-year-old, who first won the delayed autumn French Open in 2020 at the age of 19, has produced an explosive and sustained spell of form this year, including a second success at Roland Garros. It may well be that Swiatek would have got to No1 pretty soon anyway, but Barty’s retirement hastened that outcome.

Swiatek admitted she cried for 40 minutes after hearing the news, knowing it meant her expectations and hopes of a long and healthy rivalry at the top of the game had disappeared. But since then the first Pole to win a slam has just knuckled down and focused on showing she is the best around. 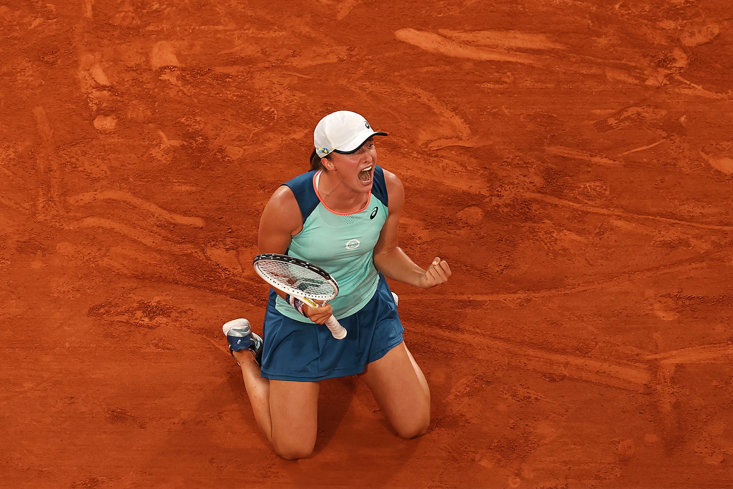 Swiatek, who won Wimbledon as a junior but has never got past the fourth round in the main draw and plays Croatian qualifier Jana Fett on Tuesday, said: “I know that there has been some discussions about who should open, and I feel really privileged that I've been chosen. There are many players here who have won Wimbledon and had the great tournament.

“It's a great thing for me. I wasn't expecting that because still I only made it to fourth round last year and that's my best result. I feel privileged and proud of myself mostly. Hopefully it's going to be a good show.

“Honestly I still feel like I need to figure out grass. Last year for sure, it was that kind of tournament where I didn't know what to expect. Then match by match I realised maybe I can do more and more.

“Still this year I only played, like, 10 days on grass, so it's not a lot. I didn't have a lot of time to prepare. But I'm just trying to stay open-minded and kind of take positives from the situation and realise that I can play without any expectations.

“I have had so much, I don't know, successes this season that I don't have to kind of show everybody that I need to play well on every tournament because it's tennis, we have ups and downs. So I try to play without expectations and just see what this tournament brings me.

“It was pretty surprising for me that I won Wimbledon juniors because that was my second tournament or third on grass. Basically I was aiming for Roland Garros. I already said that. I think I was just so motivated and I had so much just willingness and energy to win junior Grand Slam that I kind of used it here.”

Swiatek has spent some downtime back home ahead of Wimbledon after such a run of going deep into tournaments – but admitted that given Barty’s departure from the scene winning big and early in Paris had laid down a marker of intent, and showed she was a worthy No1.

She added: “For me, I always need to kind of confirm in my head that I'm in the right place and that I deserve to be here. For sure when it happened in Miami, I still felt like I remember how it is to have to play against Ash, how you feel that she has so much variety and much more options than you. I felt like I still needed some time to, like, prove myself that this is the right place to be.

“But I was able to show so much consistency. I didn't do any kind of, like, big mistakes during Stuttgart, Rome, Roland Garros, that I realised maybe I am in the right place. Right now for sure the next goal is to stay here.

“I'm just proud of myself that I was able to do that and I coped well with all the expectations and the pressure. Because at the beginning I was No.2 for, like, I don't know, five days. I felt like it wasn't planned, you know?”