Young Briton Jack Draper faces world number one Novak Djokovic on Centre Court at Wimbledon on Day One of the summer spectacle at the All England Club.

Draper, 19, is a wild card for this year’s Championship and he will face a tough but incredible challenge against the Serbian star, which is sure to be a great learning curve for the youngster and it will be interesting to see how he can fare against his opponent, one of the true greats the sport has ever seen.

A fresh face for a lot of supporters, Draper is a very promising British tennis star and has already been compared to fellow wild card and three-time Grand Slam champion Andy Murray, but the youngster is out to set his own path.

Britain’s number seven has a lot of raw talent but he is still yet to hone his skillset which he will surely do in time and his match against Djokovic will provide a perfect lesson for Draper.

The young Brit started playing at his local tennis and squash club in Sutton, competing with his brother Ben (who has just graduated on a tennis scholarship from the University of California at Berkeley) under the guidance of his mother and tennis coach Nicky. Draper has said he attributes much of his attacking style and competitive nature to his early days as a result of sibling rivalry – he always tried to get the better of his brother.

There was a strong connection with his family and the Lawn Tennis Association as his father was Chief Executive from 2006 to 2013, the same year Draper was in the crowd to witness Murray crowned the Wimbledon men’s singles champion, beating his soon-to-be opponent Djokovic. 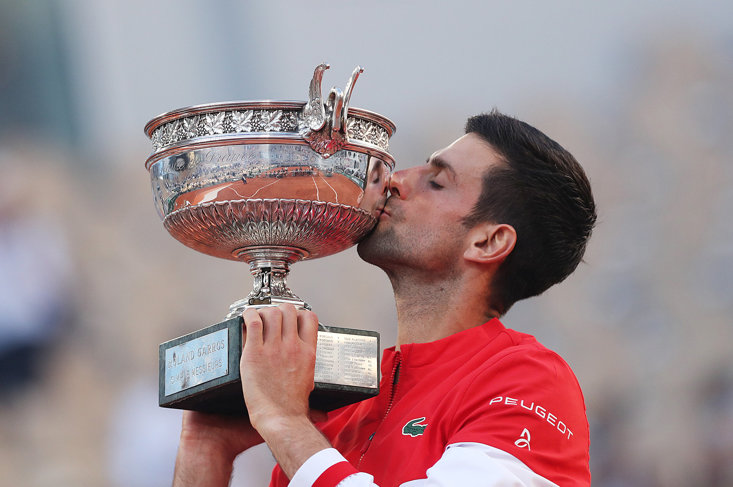 After overcoming injury and fitness setbacks earlier this year, Draper announced himself on the ATP Tour with an impressive run at Queen’s earlier this month. He stunned Italian third seed Jannik Sinner, one of the sport’s brightest young talents, for his first ATP Tour win. He then followed that up with another win against Kazakhstan’s Alexander Bublik before bowing out to fellow Brit and eventual finalist Cameron Norrie in the quarter-finals.

He will be feeling confident ahead of his test against Djokovic, with the Serb saying he does not know too much about his opponent and that he only saw bits of him at Queen’s. Djokovic added that he would need to take Draper seriously because of the young star being a homegrown player who will have the crowd’s backing and also because of the fact he has already beaten some top players.

Monday afternoon’s clash between the two is sure to provide some entertaining tennis and it will be a wonderful experience for young Draper, who will have the whole of Centre Court and the UK behind him.

x
Suggested Searches:
Manchester United
Liverpool
Manchester City
Marcus Rashford
Premier League
More
tennis
Novak Djokovic Is Right, It's Time To Get Serious About Player...
The judgement on player welfare has often been clouded by the amount of money these sporting superstars [ ... ]
tennis
20 Times A Champion - But Why Is Novak Djokovic Not Loved Like...
Novak Djokovic’s 20th Grand Slam title at Wimbledon on Sunday saw him go level with tennis’ [ ... ]
tennis
Djokovic Makes History With 20th Grand Slam Men's Singles Title...
Novak Djokovic has won his 20th Grand Slam singles title – equalling the men’s record held [ ... ]
tennis
Ashleigh Barty Emulates Evonne Goolagong 50 Years On With First...
World number one Ashleigh Barty has emulated Australian legend Evonne Goolagong and won Wimbledon for [ ... ]
tennis
Italy Eye Up Super Sunday As Berrettini Faces Djokovic In Wimbledon...
It could be a very special Sunday for Italy as their men face England in the Euro 2020 final and now [ ... ]
tennis
Wimbledon Men's Semi-Finals: Can Anyone Stop Novak Djokovic...
The men’s Wimbledon semi-finalists were confirmed on Wednesday after some intense quarter-final [ ... ]
tennis
Ashleigh Barty To Take On Karolina Pliskova In Women's Wimbledon...
World number one Ashleigh Barty will play Czech eighth seed Karolina Pliskova in Saturday's Wimbledon [ ... ]
tennis
Wimbledon Great Roger Federer Hints At Retirement, But What...
Wednesday may have marked the end of an era. The great Roger Federer hinted that his quarter-final defeat [ ... ]
tennis
Wimbledon Women's Semi-Finals: Barty The One To Beat As Sabalenka...
The women’s Wimbledon semi-finalists were confirmed on Tuesday after a brutal round of quarter-final [ ... ]
tennis
Canadians Auger-Aliassime And Shapovalov Out To Make History...
Wimbledon is loved for its rich history and we get to witness another piece of it as the quarter-finals [ ... ]
tennis
The Pressure Is On World Number One Ashleigh Barty Ahead Of...
The women’s world number one Ashleigh Barty has so far justified her ranking at Wimbledon as she [ ... ]
tennis
Coco Gauff Won’t Be Fazed When She Takes On Former Wimbledon...
As we enter the second week of Wimbledon and into the round of 16, a lot of eyes will be on young Coco [ ... ]
tennis
He's Not The Same Andy Murray, But There Might Be Plenty More...
It was a bittersweet Wimbledon return for Andy Murray after four years away from the men's singles as [ ... ]
tennis
'Unbreakable' Emma Raducanu Could Be The Future Of British Tennis
On the week of 13 October 2002, Westlife’s ‘Unbreakable’ hit the top of the UK singles [ ... ]
tennis
As Serena Exits Wimbledon, Have Her Hopes Of A 24th Grand Slam...
It wasn’t supposed to end this way. When Serena Williams beat her sister Venus in straight sets [ ... ]
tennis
Andy Murray Laughs Off Retirement Talk After Comeback Wimbledon...
Andy Murray was a slight betting underdog when he took to centre court for the first time in four years [ ... ]
tennis
16 Years After His Wimbledon Debut, This Summer Could Be Andy...
It’s summer 2005. The sun is shining, Wimbledon’s grass courts are greener than ever, the [ ... ]
tennis
Wimbledon Is Back - But How Will It Look This Year?
Wimbledon is back this summer after a forced absence last year, although things are set to look a little [ ... ]
tennis
The Tennis Stars To Look Out For At SW19 As Wimbledon Qualifying...
As the Wimbledon qualifiers get underway today there will be some unfamiliar faces who will be looking [ ... ]
tennis
The British Tennis Superstars Ready To Light Up The Court At...
We are deep into June and that can only mean one thing, Wimbledon is just around the corner and the [ ... ]
tennis
With Nadal Out And Federer Struggling, Who Can Stop Novak Djokovic...
Novak Djokovic will continue his bid to become the first male player in history to win the ‘Golden [ ... ]
tennis
Ignore The Andy Murray Comparisons, Jack Draper Is Forging His...
Jack Draper is going to face an awful lot of premature Andy Murray comparisons. He’s British, [ ... ]
tennis
Why Novak Djokovic Is Already The Greatest Male Tennis Player...
It’s time to start talking about Novak Djokovic as the greatest male tennis player of all time. [ ... ]
tennis
Djokovic Sends Nadal To Third Loss In 108 French Open Matches...
Rafael Nadal succumbed to only his third-ever defeat at the French Open on Friday evening at the hands [ ... ]
tennis
Who Are The Female Semi-Finalists In The Women's French Open?
A Russian, a Slovakian, a Czech and a Greek walk into the French Open semi-finals. We are now down to [ ... ]
tennis
Alfie Hewett And Gordon Reid Are Britain's Dominant Duo To Be...
Ant and Dec, Morecambe and Wise, Torvill and Dean. Now Britain has another remarkable pairing to [ ... ]
tennis
Is Serena Williams Finally About To Equal Grand Slam Record...
It has been more than four years since Serena Williams won the last of her 23 Grand Slam titles back [ ... ]
tennis
Coco Gauff's Maturity Is Admirable As She Targets French Open...
At the age of 15 years and 3 months old, Coco Gauff burst onto the scene in 2019 as the youngest player [ ... ]
tennis
Lessons Must Be Learned Across The Whole Of Sport Over Naomi...
Following Naomi Osaka’s decision to withdraw after the first round of the French Open, the authorities [ ... ]
tennis
A Compromise Must Be Found As Naomi Osaka Fined $15,000 For...
Following her excellent first round display at Roland Garros, Naomi Osaka is being threatened with expulsion [ ... ]