Snooker
News
The number one has called for younger commentators and pundits in the sport...
Hector Nunns
18:37, 26 Apr 2021

Judd Trump is into the quarter-finals of the Betfred World Championship – and making an impression on the tournament on and off the table.

The world number one beat David Gilbert 13-8 at the Crucible in Sheffield as he chases a second world title and a record-equalling sixth success of another spectacular season.

The Juddernaut is the tournament favourite and has been the man to beat in snooker for almost three years, but he is now also finding his voice as a spokesperson for the sport and in particular the younger generation with the ‘Class of 1992’ veterans in the autumn of their careers.

More on Trump’s impact away from the baize later on, but after his victory he said:  “You cannot play brilliantly all the time. I played pretty decent but I have not played my best all the time this season when I have won events.

“I am not playing anywhere near my best, but just battling through. If I can get through the first few rounds, let everyone else play their absolute best, then I can swoop it all up.

“I'm hoping to save my best for the next game onwards. There are a lot of players playing well left in this tournament, and you could make a case for almost all of them at the moment.

“Myself and Kyren Wilson have played well but probably not at our best yet, but that’s okay in a long tournament when you want to peak when it matters most. Neil Robertson has been impressive.”

Most of the damage was done in the second session against Gilbert, and that saw Trump resume on Monday morning leading 11-5 and needing just two more frames to reach the quarter-finals.

The Juddernaut has also replaced the lucky Louis Vuitton shoes that brought him an astonishing 15 titles in three seasons and around £2.5million in prize money with a shiny new £900 pair. The old ones are to be auctioned off to raise money for the Jessie May Trust, a Bristol-based charity providing nursing care at home for terminally ill children.

Ahead of the tournament Trump criticised certain aspects of the sport – in particular, how it is covered and presented to the public by the broadcasters. One of Trump’s calls was for younger commentators and for more and less senior current card-holding players to play a greater role. 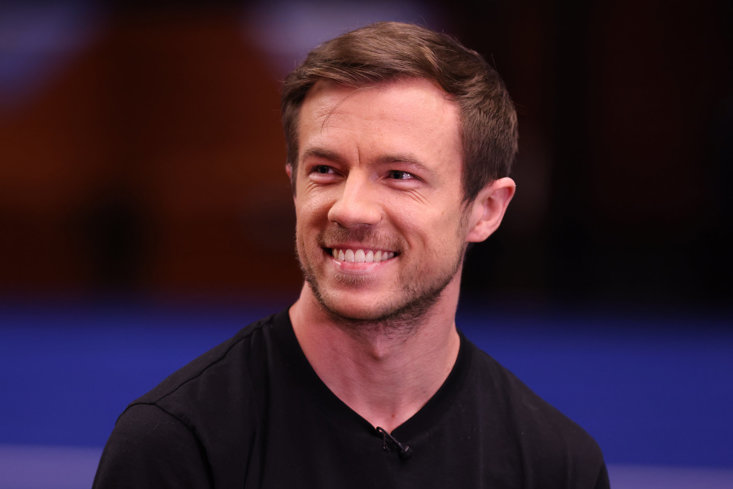 The BBC have discussed his comments at length during the event from the main studio in the Winter Gardens, with presenters and pundits weighing in on the subject.

And especially with production company IMG’s contract up for the expected renewal it was no surprise and perhaps no coincidence that Trump’s good friend Jack Lisowski, at 29 arguably the best player never to win a ranking title, appeared in the commentary box on Sunday following his own exit to Neil Robertson the previous day.

Lisowski was pitched in alongside the recently retired Alan McManus, a three-time Crucible semi-finalist, on Sunday for his first two sessions of the world number one’s last-16 contest against David Gilbert.

Hardly anyone has a better inside track on Trump’s game than Lisowski, who practised with him for many years in Romford before each flew back to their original nests in Cheltenham and Bristol respectively. But even putting that to one side, it certainly felt like a deliberate and calculated move to engage a younger audience, something that was very much the thrust of the Juddernaut’s original concerns.

As a player, Lisowski - who has lost three finals to Trump just this season – is one the fastest and most fluent on the circuit, with a game that draws in fans and is always easy on the eye. Throw in a few lapses in concentration and a certain vulnerability on the table, and you have some kind of ‘People’s Champion’ in the making.

As a character Lisowski has always been disarming, engaging and honest – maybe even too honest at times about how some of the criticism from pundits strikes home about how he should be winning more. And his perspective on life and snooker comes from overcoming battles going way outside sport.

As a teenager Lisowski was diagnosed with Hodgkin’s lymphoma, requiring eight months of chemotherapy with sessions every two weeks, treatment that he admitted “left me pretty much a walking zombie – it was horrible”. In the circumstances, carving out any sort of a professional career has been a triumph already.

Given the criticism he himself has received, it was always going to be interesting how he approached the gig himself, but Lisowski’s BBC commentary debut went with a swing. If it was the intention to introduce some freshness and new insight from one of the most talented of the current crop of young players, the experiment must be considered a success.

At the table Lisowski, much like Ronnie O’Sullivan and Trump, sees and plays the shots very quickly and he brought that same ability to much of his work with mike in hand, together with a very recent assessment of the way the table and conditions were playing.

Trump was in no doubt as to the debt involved, saying: “Jack owes me big time for getting him that job.”