Mark Selby insists there is no chance he will ever rest on his snooker laurels while there are titles to win and history to be made.

The 38-year-old from Leicester heads into 2022 as the reigning and four-time world champion, and also the current world No1 in a running battle with Judd Trump. And yet there have been times when doubters and snipers questioned Selby’s right to be ranked up there with some of the greatest players of all time.

Those jibes have centred around a determined approach and style compared to a more cavalier natural fluency exhibited by other leading players such as Ronnie O’Sullivan and Trump.

However, success at this year’s Betfred World Championship put to bed any lingering carping on that front. Beating Shaun Murphy 18-15 at the Crucible Theatre in Sheffield not only gave Selby his fourth such triumph, but took his tally in the game’s big three ‘Majors’ to nine.

That leaves him equal with John Higgins, and behind only Ronnie O’Sullivan (20), Stephen Hendry (18) and Steve Davis (15). Trump, admittedly a younger man at 32, only has three to date. 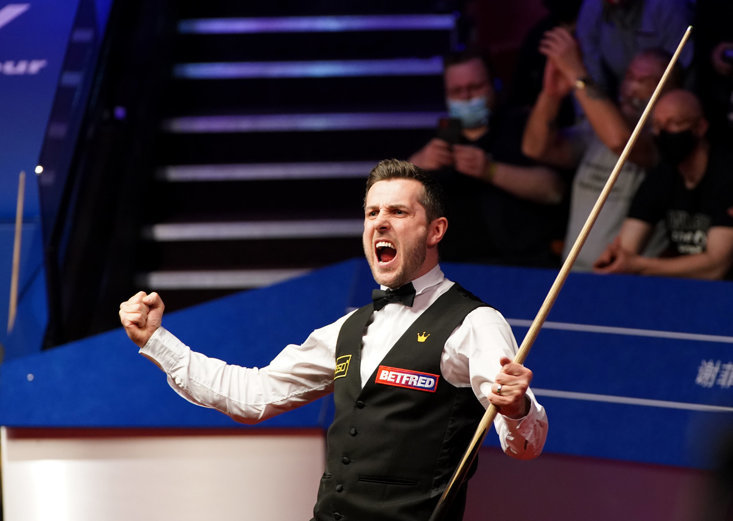 17 of Selby’s 20 ranking event wins have come since 2014, and an exceptional strike-rate in ranking-tournament finals is frightening.

Selby has won 12 of his last 13 such showpieces and even the one he lost – the quickfire format, single-frame Shootout – would be seen by many as an irrelevance. And he admits that he still has to do a double-take at times, looking at the house and lifestyle success has brought him after growing up in tough circumstances with beloved and late father David on a council estate in the east Midlands.

Reflecting on another great year in 2021, Selby said: “It doesn’t get less special winning the World Championship - this one felt just as good. Look, I suppose there will always be something extra about your first one. And particularly because that came with a win against Ronnie in the final.

“It’s the first one and at that precise moment you don’t know if it might also be your last. But every win at the Crucible has been wonderful. It is such a tough tournament to win and tests you as a snooker player in every way to the maximum.

“Hearing that you are world champion for the whole of that next 12 months, it is a great feeling – there isn’t really a better one.

“The big titles and the nine major wins, of course they give you a sense of satisfaction. But I am just not ready to wallow too much in that and reflect on it all.

“I feel very strongly I have a lot more still to give and to win, and a few years left at the top of the game. So I am looking to increase that tally if possible.

“That’s what I am looking to do. And then whether I do or I don’t when I do eventually pack my cue away I will be proud to reflect on what I have achieved . It is already a lot more than what I set out to do, I never thought I would win as much as I have because it is so competitive.

“The feeling of actually winning something significant, and even more so if your friends and family who have lived it day in, day out through tough times are there – there is nothing to top it.

“The flip side, getting beaten all the time on a bad run, is maybe the worst feeling in the world. So if you do win, you must cherish them at the time.

“And that feeling of when you do win, remembering it and using it for motivation, is why you play and strive to get better and work even harder to recapture that feeling.

“There are moments when you do a bit of a double-take of what you have made of yourself and done with your life. For me the memories are there of growing up on a council estate with my father, and there is a big change to where I live now.

“I always like to think that I keep my feet on the ground as a person and haven’t changed too much as a person.

“But I know where and how I grew up, and the difference to that house and the one we are living in now does make you pinch yourself sometimes. And makes you a bit proud. 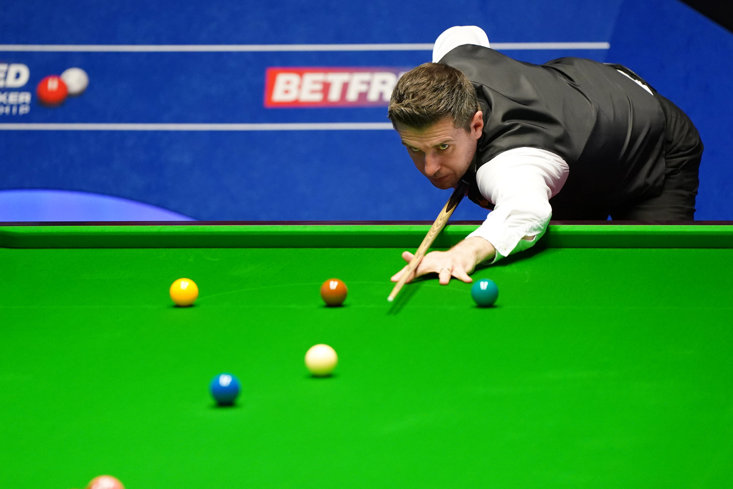 “One time after winning the worlds I bought myself a car which I always wanted as a young lad, but generally I don’t waste it or fritter it away, but try and keep it safe.

“I am looking to the future and anticipating a time when I might not be doing so well and having some property or whatever to fall back on.”

For many years it has been the accepted wisdom that if anyone was going to match or overhaul Hendry’s total of seven world titles, that it would be O’Sullivan – currently standing on six.

But with Selby eight years younger and now up to four, the Scot himself has openly speculated that the Leicester man might be the bigger danger to his most treasured record.

Selby said: “Stephen Hendry has come out and said that he thinks I am the most likely and maybe the only person to equal or even better his record of seven world titles.

“Sitting here now if I won one more world title before I called it a day I would be pretty over the moon with that, because I know how hard it is.

“Then maybe another couple of Triple Crown wins, victories at the UK Championship or the Masters. They are the big titles that everyone remembers and judges you on.

“Players like Judd…he is a great, great player but still has just the three major wins and some people will always bring that up. I am sure by the end of his career he will have got that number right up.

“He is still young and a great – but to be that all-time great like Hendry, O’Sullivan, Higgins, Davis, Williams, you want those major successes.

“Hendry and O’Sullivan look at the majors and Triple Crowns people have won, much as they would in tennis with Federer, Nadal and Djokovic.”

x
Suggested Searches:
Manchester United
Liverpool
Manchester City
Marcus Rashford
Premier League
More
snooker
Shaun Murphy: Return To German Masters Feels Like A Huge Moment...
Shaun Murphy admits that seeing this week’s German Masters returning to Berlin feels like a huge [ ... ]
snooker
Prince of Persia: Iran’s Hossein Vafaei Wins The Snooker Shootout...
Snooker’s Prince of Persia Hossein Vafaei proved himself to be king of the Shootout on Sunday [ ... ]
snooker
John Higgins Desperate To Attract New Fans To 'Stuck In The...
Snooker star John Higgins would love to see an influx of new fans in the sport before he hangs up his [ ... ]
snooker
15-Year-Old Schoolboy Wildcard Stan Moody Is A Shoot Out Sensation
Schoolboy Stan Moody claimed a sensational debut big-tournament victory at the quickfire Shoot Out on [ ... ]
snooker
Peter Devlin Raps On Stage Alongside Jessie J In Snooker Shoot...
Peter Devlin hopes he can perform on the Shootout stage as well as he did with singer Jessie J earlier [ ... ]
snooker
18.5m Viewers And Upside-Down Glasses: Dennis Taylor Ruled Snooker...
Snooker may never quite see another high-watermark like the 1985 World Championship final with its 18.5million [ ... ]
snooker
Neil Robertson: Other Tournaments Need To Match Incredible Ally...
Neil Robertson has urged the Crucible crowd to up their game as a spectacular Masters spectacle this [ ... ]
snooker
Neil Robertson Builds On Australian Ashes Success With Masters...
Neil Robertson piled Masters success on Ashes misery as the latest Australian to demolish England’s [ ... ]
snooker
Barry Hawkins Digs Deep To Book Masters Final Showdown With...
Barry Hawkins took his place in the Masters final after coming through yet another Alexandra Palace [ ... ]
snooker
Paul Hunter: The Great Man The Masters Trophy Is Appropriately...
Among many poignant moments at the 2022 Masters at Alexandra Palace, one perhaps stood out above all [ ... ]
snooker
Robertson Wins Masters Thriller To Reach Final But Celebration...
Neil Robertson produced an astonishing comeback to reach the Masters final by beating Mark Williams [ ... ]
snooker
World Number One Mark Selby To Seek Help Over Mental Health...
World No1 Mark Selby has revealed he will be seeking help over the current state of his mental health. [ ... ]
snooker
Neil Robertson Vows To Jump In Icy Alexandra Palace Lake If...
Neil Robertson has vowed to jump into the icy Alexandra Palace boating lake if he wins a second Masters [ ... ]
snooker
Judd Trump Insists Masters Atmosphere Is More Like Boxing Than...
Judd Trump laid out rival Kyren Wilson with a series of hammer blows on Friday – and then insisted [ ... ]
snooker
Masters 2022: Williams Edges Out Old Rival Higgins In An Alexandra...
Both Mark Williams and John Higgins testified to one of the most extraordinary atmospheres ever seen [ ... ]
snooker
Neil Robertson: Ashes and Michael Jordan Inspired Me Against...
Australia’s Neil Robertson took inspiration from both the Ashes and sporting legend Michael Jordan [ ... ]
snooker
Kyren Wilson Relishing Masters Clash With Rival Judd Trump
Kyren Wilson became the second man to scrape into the Masters quarter-finals on Wednesday – as [ ... ]
snooker
Judd Trump Edges Into Quarter-Finals But Mark Allen Still Smiling...
Mark Allen was still smiling on Wednesday night despite an agonising Masters final-frame defeat to Judd [ ... ]
snooker
Masters 2022: Snooker’s Class Of 1992 Still Thrilling Crowds...
All three of snooker’s famous Class of 1992 of Ronnie O’Sullivan, John Higgins and Mark [ ... ]
snooker
Ronnie O'Sullivan Wows Rolling Stones Pal Ronnie Wood With Masters...
Ronnie O’Sullivan wowed Rolling Stone Ronnie Wood as the Rocket got his bid for an eighth Masters [ ... ]
snooker
Shaun Murphy: Masters Defeat Is Just More Pain On Top Of Back...
It wasn’t just the pain of a disappointing Masters first-round defeat to Barry Hawkins that was [ ... ]
snooker
Ranking The Five Greatest Masters Finals - Featuring Williams,...
There were some near misses, and I have chosen to leave out the superb comeback victory for a 39-year-old [ ... ]
snooker
Masters 2022: History-Making Higgins Books His Place In The...
John Higgins made history when he walked out against reigning UK champion Zhao Xintong at the Masters [ ... ]
snooker
Fired-Up Mark Williams Defeats Wayward Defending Masters Champion...
Defending Masters champion Yan Bingtao had a bad start to his Sunday, getting lost while being [ ... ]
snooker
The Constant Uncertainty Surrounding Djokovic Could Impact His...
Detained and then isolated at Melbourne Airport on arrival from the Middle East, Novak Djokovic has [ ... ]
snooker
Steve Davis Looks Back At His Stunning Masters Win Over O’Sullivan...
Steve Davis still believes his last major tournament win owed plenty to a streaker breaking Ronnie O’Sullivan’s [ ... ]
snooker
Changing Of The Guard: China’s Hopes For Snooker Domination
When Ding Junhui burst onto the snooker scene in spectacular fashion in 2005, many expected the Chinese [ ... ]
snooker
Masters Preview: Can Chinese Whizkid Yan Bingtao Defend His...
Snooker’s big guns will be out in force for this year’s Masters (9-16 January) and for defending [ ... ]
snooker
Ken Doherty - 25 years On From His Greatest Triumph At The Crucible
Ken Doherty will head back to the Crucible Theatre later this year to celebrate the 25th anniversary [ ... ]
snooker
Snooker’s Original ‘Grinder’ Cliff Thorburn Ready To Call It...
Snooker’s original ‘Grinder’ Cliff Thorburn admits he is finally ready to pack away [ ... ]