The snooker fans turning up on opening day of the Betfred World Championships had certainly proved themselves as the lifeblood of the game, having jumped through countless hoops to be part of the first crowd at a live UK sporting event this year.

Just to be at the Crucible Theatre there were lateral flow Covid tests, PCR tests to take home, masks to be worn at all times including during play, social distancing and the difficulty of simply finding somewhere to get some sleep in Sheffield, with hotels closed unless you were involved in the tournament, or a key worker.

This event is one of the government’s pilot test events under a research programme, specifically looking to ease the path back to some kind of normality for indoor sport, theatre, and music. A maximum 325 tickets were available for Saturday, around a third capacity, rising to a possible full-house 980 for the final if all goes well.

In Saturday’s first session, even with six-time world champion and box office star Ronnie O’Sullivan in action, only 213 were sold, with the figures 204 and 215 for the afternoon and evening, but as they moved along through the photo ID, e-ticket, proof of negative test, and test and trace checkpoints the fans could barely suppress their excitement.

Jason Ferguson, chairman of governing body the WPBSA, said, “What happens here means a lot not only to snooker, but to sport and even wider than that. Even before this pilot we have already run 18 successful, safe events on the tour, dealing with the government all the way.”

The snooker fans lucky enough to be holding tickets and having successfully negotiated their Covid test had jumped through a lot of hoops to be at the Crucible, however they acknowledged that some other die-hards had opted to stay away this time. 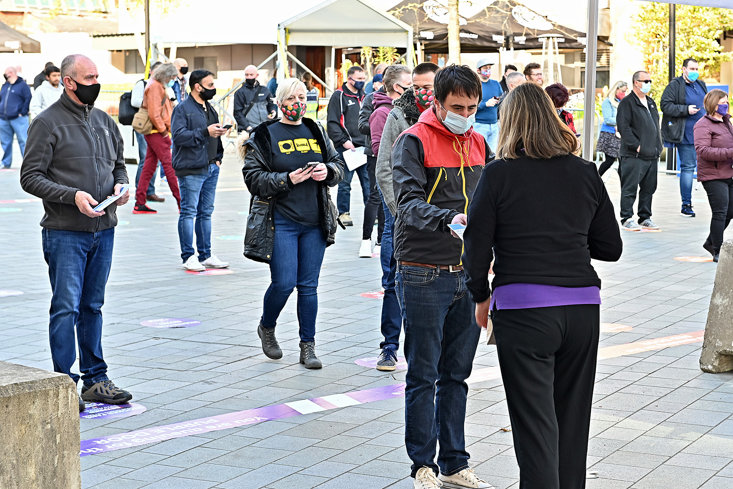 Kent’s Ben Sizer, a regular at the World Championships, said, “I had already rolled over tickets for 2020 to this year after the Crucible was closed to fans, and have done that again for 2022 – but I also dived in on resale day last week and managed to get tickets for opening day, four days next week and the semis and the final.

“I felt reassured that all here have had a negative test, you have the social distancing though the capacity may go up through the rounds, and the face masks…so I felt safe coming. I will have to do a total four lateral flow tests in a centre, and then four at home for the research programme.

“Some who come every year decided not to come  with the testing requirements, but in there watching Ronnie’s game there was an element of normality back, which was nice. It still felt sparse on our side of the divide, on the other side for Yan Bingtao’s match you could have lied down and still be socially distanced it was that empty.” 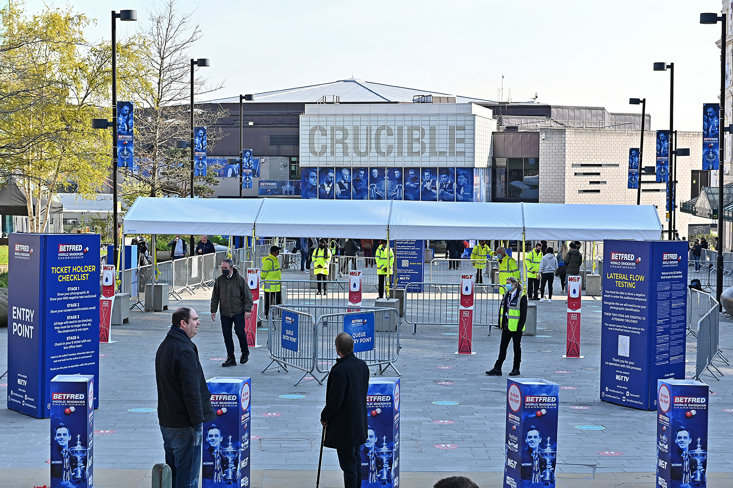 Jenni Hayes, another superfan living in London, said, “Not being able to book hotels has obviously not been easy, it limits your options. I have been coming for years, and it made me really emotional just being back, seeing my friends again, even though you cannot hug them.

“Hopefully it all goes really well and, as well as indoor sport, this paves the way for theatres reopening. I judged the situation myself, it’s like a risk assessment. I live by myself so even if I do pick anything up, I won’t give to anyone else. But I know people who have had both jabs who don’t feel comfortable at full capacity.”

Play was halted at 2.58pm early in the afternoon first by referee Marcel Eckardt in the match between Neil Robertson against Liang Wenbo, and almost simultaneously by Sheffield official Brendan Moore in the Stephen Maguire against Jamie Jones contest. Announced by MC Rob Walker, a minute’s silence was observed in memory of Prince Philip, the Duke of Edinburgh at exactly 3pm to join the rest of the nation in reflection at the time of the start to his funeral in Windsor.

The Sportsman
@TheSportsman
CROWDS RETURN TO LIVE SPORT 🙌🏼
Roll on the @Betfred World Snooker Championship at The Crucible. Let's have it.
@WeAreWST | @crucibletheatre
10
45

The pause in the action came as the in-form Australian Robertson, one of the leading contenders for a second world title this year, was addressing a crucial pink ball to seal the second frame, but he duly came back to the table to finish the job off.

Away from the snooker it all seemed to be happening outside the venue. Bafflingly there was an anti-vaccine passport demonstration outside the Winter Gardens, at the top of Tudor Square opposite the Crucible. No such vaccine passports are being used at the tournament.

They group numbered around 25 - plus two dogs – and as the sun beat down they waved banners bearing slogans such as ‘No Vaccine Passport – Inhumane’, and ‘Medical apartheid is wrong’, as well as going through an anti-vaccine, anti-mask and anti-media songbook. Shortly afterwards a 'Kill The Bill' protest walked slightly more nosily past the media centre. All in a day's work at the snooker.