Snooker
News
Anthony McGill will be looking to build on last year's World Championship, without a doubt his most successful to date
Rob Walker
10:00, 01 Apr 2021

Anthony McGill is one of the quietest, most unassuming sportsmen you could ever meet. When he made his Betfred World Snooker Championship debut back in 2015 we nicknamed him ‘the Smiling Assassin’, such was the calm underwhelmed demeanor the Glaswegian exuded on Snooker’s biggest stage.

That maiden run to the quarter finals, when he bowed out to Shaun Murphy (after victories over Stephen Maguire and defending champion Mark Selby), told us a lot about him. It revealed his temperament was well suited to the long frame format and gave us the indication that he would be back at the Crucible. And in fine style.

Two ranking event titles followed with victories at the Indian Open in 2016 and the ever entertaining Snooker Shootout in 2017. All of a sudden he was up into the world’s top 16 and life looked good. But like so many before him, after such speedy progress that momentum proved hard to maintain. This is definitely a sport in which even the best never stop learning  and as the deep runs began to dry up a little, his provisional ranking at one stage dropped back outside the top 30.

One of the key elements of his recent consistency and success, however, is the partnership he has formed through his friendship with Stephen Maguire and John Higgins. Between them they’ve hired what they refer to as “The Unit,” an unglamorous but highly effective practice facility in which they regularly go head-to-head over best of 19s.

The three-way dynamic works brilliantly for all of them. Maguire produced the best season of his career last year off the back of repeated sessions there, whilst John Higgins has recently ended a three-year title drought with a sensational victory in the Players Championships in February, thrashing Ronnie O’Sullivan in the final. 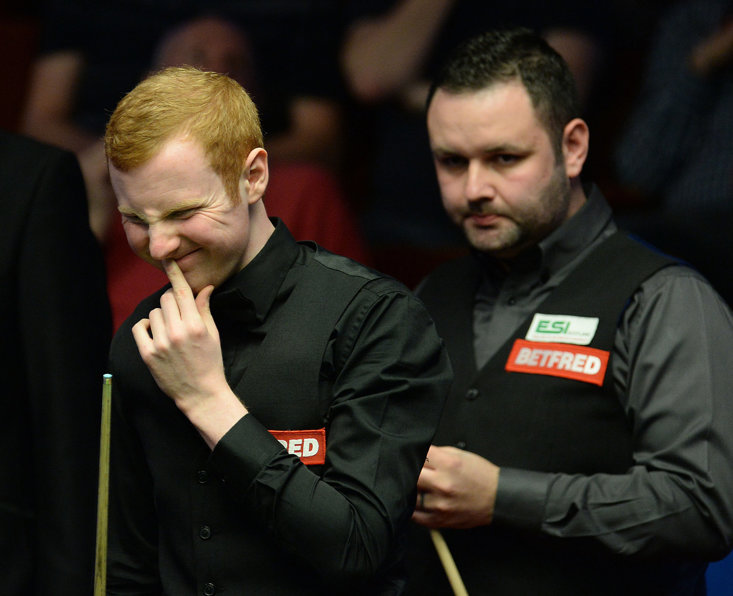 As for McGill, the fruits of his labour were clearly in evidence in last year’s World Championship which was without doubt his most memorable to date. He arrived in Sheffield after a very modest Covid interrupted season, yet there was a clue to his intent and mindset with his final frame 10-9 victory over Jack Lisowski in the opening round.

The last 16 saw him take on the very talented Welshman Jamie Clarke and in the tight confines of the two table set up, there wasn’t so much a clash of shoulders, as clash of heads, such was the heated nature of their extraordinary and frank exchange.

Both felt their opponent was invading the other’s personal space, undermining the unspoken etiquette which defines the sport. They squared up and we all held our breath!

Big Dutchman Jan Verhaas was the man in the white gloves that day and he looked more like a boxing referee than a top snooker official as he told them both to calm down. A storm in a teacup, yes, but enough for Clarke to reach for his phone and launch a social media offensive in the next interval.

His now immortal tweet of “If you want to dance, let’s dance,” was more than enough to inspire some brilliant headlines in the press room and crucially whilst it distracted him, it had the opposite effect on McGill. Once again his unflappable nature came to the fore when he needed it the most. He was fired up, but in a manner that cleverly showed his self control.

He mounted a monumental comeback from 7-1 down to take the win in a second successive decider, securing a second quarter final, in which many would have assumed he would face good friend and fellow Scot John Higgins. But following the performance of a lifetime from Norway’s expatriated Londoner Kurt Maflin, the match turned out to be a superb opportunity for both qualifiers.

Again, McGill confounded the experts and critics. The scheduling meant Maflin had enjoyed three full days off after his huge win over Higgins, whereas McGill’s epic comeback against Clarke had taken him late into the previous evening. Everyone said he would be shattered and that Maflin would run away with it. As it turned out the opposite happened.

McGill was in the groove, storming to an amazing 7-1 early lead, an advantage he was never to relinquish. Maflin fought back but it wasn’t enough to stop McGill who won 13-10, marching into the single table set up for the first time in his career.

And it’s the end of the semi-final against Kyren Wilson which will go down in Crucible history. It’s no exaggeration to say it was an hour of drama compelling enough to rival Steve Davis v Dennis Taylor in the 1985 final. A big call I know but if you missed it, look it up on YouTube - I promise you won’t be disappointed.

In a match of ever changing momentum, McGill at one stage leading 4-1 then trailing 14-11, they eventually dragged each other all the way to a decider. The pair looked almost punch drunk in the face of the prize dangling tantalisingly close, as both were seeking a maiden appearance in the final and it showed.

As the frame wore on, so too did the tension, mistakes, flukes and fears as they both seemed too terrified to win it. Tears flowed from the hugely likeable Wilson as he later openly admitted a slice of luck had helped him crawl across the line. Just.

When I interviewed McGill afterwards, he said the Snooker Gods had not aligned for him that Friday afternoon. And you knew what he meant.

Nonetheless that semi-final cheque of £100,000 (and equivalent ranking points) gave him the perfect platform from which to try and bounce back into the world’s top 16. And although it hasn’t been a glittering season for the Scot, he has done enough to make it back as a top seed for the first time since 2018.

Whether our nerves, or his, can withstand another run like last summer is unclear. But one thing is certain. Watching Anthony McGill at the Crucible is always fascinating. Because whilst he might not shout about his chances or aspirations, in his own quiet way, you never quite know…