Chelsea boss Emma Hayes said how much she enjoyed being behind Arsenal in the title race, but now the Blues are in the driving seat in the race for the Women’s Super League title. Braces from Bethany England, Guro Reiten and Sam Kerr helped secure a thumping 9-0 victory away at Leicester City.

While Arsenal’s North London derby match with Tottenham Hotspur was postponed due to Covid-19 cases, as was Chelsea’s clash with Spurs in midweek, Hayes’ side were able to take control in the gripping title race that is almost certain to go down to the final day of the season. Their commanding victory at the King Power Stadium saw them jump one point above Jonas Eidevall’s side, with both teams having now played the same amount of games. As far as mind games go, this will be a huge boost for the reigning champions heading into the final few games of the campaign.

The Blues looked sharp straight from the first whistle and it took them just three minutes to open the scoring through Reiten who scored with a delightful free-kick into the top-left corner. And they were 3-0 up just four minutes later thanks to top scorer Kerr and England as the Foxes’ defence was carved open with far too much ease. The game was won inside 10 minutes as the hosts just couldn’t get anywhere near Chelsea and the quality on show will likely have struck fear into Arsenal as this thrilling season enters its final stretch.

The fourth goal was scored just after the 10-minute mark as Aniek Nouwen got in on the action. England and Reiten both grabbed their second goals before the break and Kerr soon joined them minutes into the second half. The game was capped off with Lauren James scoring her first league goal for the club and Jessie Fleming notching in the final minute of the game. 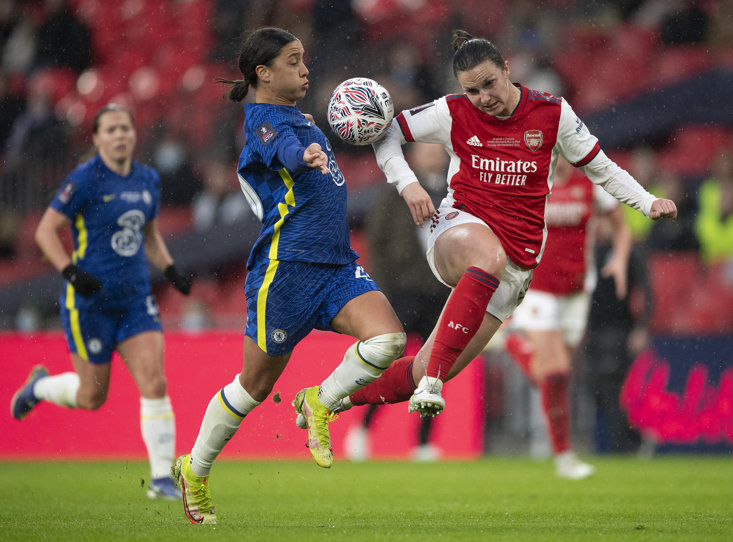 Chelsea showed their class and strength against Leicester and they look to be hitting their stride as they bid to become champions for the third consecutive year. The Foxes were far too weak and seemingly gave up so quickly, and that is something that needs to be worked on for next season under Lydia Bedford. They will count themselves lucky that Birmingham City have been far worse than them this term as performances like that would normally result in relegation from the WSL.

At Old Trafford, Manchester United enjoyed playing in the Theatre of Dreams for the first time in front of a crowd as they ran out as 3-1 winners over Everton after coming from behind. Former Manchester City winger Claire Emslie came back to haunt the Red Devils inside five minutes with a graceful run and exquisite finish to stun the home crowd. Manchester United boss Marc Skinner was able to regroup his players who were able to deliver a response before the break.

Childhood Manchester United supporter Alessia Russo got her side back on level terms with a looping header just after the half-hour mark as the hosts looked to be in the ascendancy. Katie Zelem completed the turnaround from the penalty spot early in the second half after Martha Thomas was brought down by Lucy Graham and Russo sealed the victory late on with her second header of the afternoon. She met a corner from the right and guided the ball into the top corner which left goalkeeper Sandy MacIver stranded. United have given themselves some breathing space from rivals Manchester City with a vital three points as the race for the Champions League is just as exciting as the race for the title. City’s game with Birmingham was postponed due to Covid which will need to be rescheduled in the next few weeks.

Elsewhere, Brighton & Hove Albion leapfrogged West Ham United to move sixth with a 2-0 victory away at the Chigwell Construction Stadium. Aileen Whelan and Inessa Kaagman were on the scoresheet for Hope Powell’s side while Aston Villa rescued a point in a 1-1 draw with Reading at the Banks’s Stadium.