Chelsea moved back to the top of the Women’s Super League on Sunday with a 2-0 victory over Aston Villa courtesy of a Sam Kerr double. The striker opened the scoring in the first-half, climbing highest to head home Fran Kirby’s cross via the post. The two combined again on 57 minutes to double the advantage and seal the win to move two points ahead of Manchester City at the top.

City, who played on Saturday, had beaten Reading with Chloe Kelly grabbing an 87th minute winner but their time in first place lasted only a day following the Blues’ triumph.

Birmingham and Bristol City’s six-pointer ended in a draw which could prove vital at the end of the season as the two stayed above Aston Villa and West Ham, who lost 2-0 at Manchester United. As Old Trafford hosted a Women’s Super League game for the first time, teenager Lauren James, sister of Chelsea’s Reece, netted early in the second half before Christen Press notched a second. 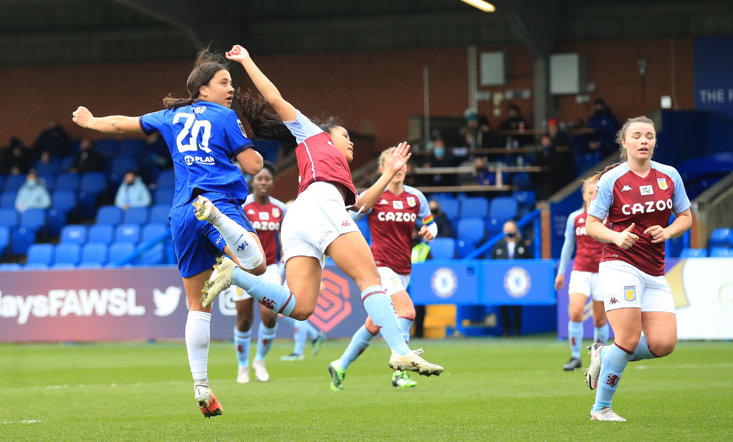 Brighton’s four-game winning streak came to an abrupt halt as they were hammered 5-0 at home by Everton; Hayley Raso netting a hat-trick for the Toffees following Izzy Christiansen’s penalty. Simone Magill got the other in the rout.

Elsewhere, Arsenal claimed bragging rights in north London with a 3-0 win over Tottenham who are now winless in seven games and sit eighth in the 12-team league. Caitlin Foord, Vivianne Miedema and Katie McCabe scored for the Gunners in a comprehensive victory as they kept in touch with United in third.