Us Sports
News
The show is over, but Cardiff will benefit from WWE's community work for years to come
Joey Mills
17:00, 12 Sep 2022

The ring is packed away, the Principality Stadium is preparing to host Supercross motorcycle racing and the WWE superstars are back in the United States. So with WWE Clash At The Castle in the history books, what gets left behind in Cardiff? A lot more than you’d think, as it turns out. Over the course of a long weekend in the Welsh capital, WWE worked closely within the community to leave a lasting legacy for a generation of kids in the city.

The Sportsman was fortunate enough to be on hand for some brilliant community events the company put on. Unlike a number of other sports and entertainment endeavours, WWE works hard to create lasting links with local communities wherever they wrestle.

The company hosted a Be A Star rally in conjunction with the Boys’ and Girls’ Clubs of Wales. Be A Star is WWE’s anti-bullying arm, and children from across the country got to spend the afternoon with Raw Women’s Champion Bianca Belair and The Street Profits team of Montez Ford and Angelo Dawkins. The wrestlers shared their own experiences of bullying and led the children through a number of activities and games.

Belair spoke afterwards at a press event, explaining how her own mental health battles have been soothed by her work with children. “Me really being vulnerable and opening up about it actually was very therapeutic for me.  I just knew that when I was going through my mental health issues, when I was in the thick of it, I needed someone that I could relate to”. Belair added, “I really wanted to just be vulnerable and open up and give someone what I needed when I was going through it during that time. That actually is therapeutic for me, it helps me stay on the right track too.”

Many of the children expressed a passion for sport. There were a number of passionate football and rugby players in the room, as well as those keen to emulate their WWE heroes. Montez Ford spoke of the importance of sport during his own youth.

“I participated in sports growing up, and I feel like it contributed a lot to staying out of trouble as well. The more active these kids are, the more physical they are… it stops them from participating in other things that could eventually end up getting them in trouble. I’m not saying it will fix everything, but it could eliminate a lot of possible other things that they can get their mind wandered off to.” 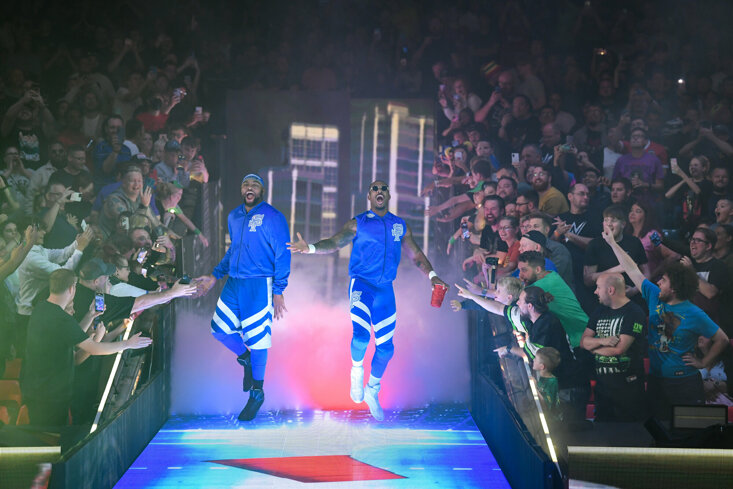 Angelo Dawkins also cites childhood participation in sport as a positive influence that has carried through into adult life. “I didn’t start wrestling until my junior high school so I have to give credit for that to my coach. Without him, I probably would not be here having this conversation”.

The Sportsman caught up with Bianca Belair the following day to ask how working with the children of Cardiff differed from the prospect of wrestling in front of over 60,000 fans at the Principality Stadium. “It’s different in its own way. I feel like I'm always in my element. Once I get out in a stadium full of people. I'm in the ring with these amazing women, that makes me even more comfortable.”

The 33-year-old did admit that the more direct, interactive environment of leading a group of children can be more daunting. “With kids, it's always a little more nerve wracking because you’ve got to make sure you keep their attention and you're cool enough for them to actually listen to what you have to say. They were amazing. They were great kids, they're gonna grow to be amazing human beings.”

WWE’s charitable and community endeavours did not stop with the Be A Star rally. Superstars Drew McIntyre, Liv Morgan, Butch and Rhea Ripley participated in a Special Olympics basketball game with the team that took home the 2022 National Championship. McIntyre was also on hand to present awards to Cardiff’s Community Champions in a ceremony at Cardiff Castle on the day of the show.

What becomes clear is that when you sign up to become a WWE superstar you are not merely taking on the role of an athlete. You are also doing the vital duty of providing inspiration and support to those who need it. Having spoken with a number of the talents involved, what shines through the most is how much they appreciate the chance to engage with the community. None of these events felt like a box-ticking exercise and each superstar seemed to feel a genuine pride in helping others. When WWE comes to town, you really do get so much more than just a wrestling show.