Football
News
Xavi The Next Superstar Manager? Five Barcelona Legends That Have Tasted Success In The Dugout
Jack Kitson
19:31, 03 May 2019

Xavi Hernandez has targeted a position in the managerial arena after revealing that he will hang up his boots at the end of the season.

In the interview with AS, one of the greatest players of his generation stated his intent to implement a Cruyffian philosophy when he does step into the dugout.

“My philosophy as a manager reflects the style that we developed for many years under the influence of Johan Cruyff and from La Masia and it's main exponent is in the way Barcelona play.

“I love the see the teams that take the initiative on the field, attacking football and go back to that place we all loved since the days of our youth: possession football.”

Xavi is set to complete his coaching badges, and he undoubtedly has the knowledge, understanding, intelligence, and a sprinkling of genius to go on and follow in the footsteps of Barcelona legends that not only thrived as players, but then tasted success as managers.

It makes sense to start with the most influential figure in Barcelona history, and perhaps modern football: Johan Cruyff.

Cruyff is not only regarded as one of the greatest players of all time, but the Dutch icon also enjoyed huge success as a manager, most notably at Barcelona.

Cruyff created the famous Dream Team that won four successive La Liga titles, and the club’s first ever European Cup. As a player he helped implement the most famous youth system in the world, La Masia, which has produced a multitude of megastars.

Cruyff’s most famous disciple won a plethora of honours at the Nou Camp as a player, before he was lured back in 2007 as boss of the B team. A year later he stepped up to succeed Frank Rijkaard - he pipped Jose Mourinho to the senior job - and the rest, as they say, is history.

In four simply stunning seasons Guardiola lifted 14 trophies, adding another seven at Bayern Munich, and four and counting so far at Man City with whom he’s looking to lead to an unprecedented English treble. 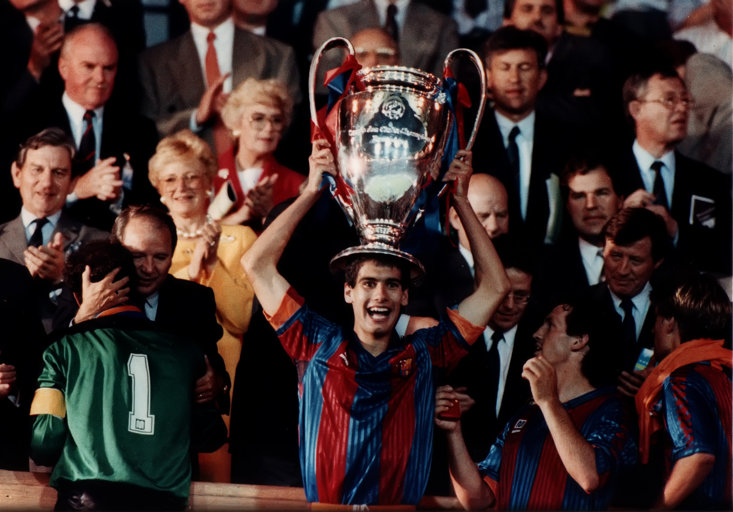 Pep Guardiola won 28 trophies as a player, then manager, of Barcelona

Under Guardiola Barcelona won the league, cup, and Champions League treble in 2008/09. Six years later one of his former teammates, Luis Enrique, repeated the treble and scooped another six cups during a trophy-drenched three-year spell in charge. Like Guardiola, Enrique took a sabbatical, and is now looking to lead the nation’s next crop of stars to international glory.

The Barcelona icon was a key ingredient of the Dream Team that dominated domestically and tasted success in Europe. In fact, it was Koeman who scored the extra-time winner in the 1992 European Cup Final success over Sampdoria.

As a manager Koeman has lifted three Eredivisie titles with Ajax and PSV, plus silverware with Valencia and Benfica. Over in England he steered Southampton to their highest-ever Premier League finish (6th), and while he endured a frustrating spell at Everton, he’s currently bidding to bring Holland their first major trophy since he won Euro 1988 as a player.

What’s the manager who holds the record for the shortest ever Premier League managerial spell in terms of matches (four), and prior to that flopped at Inter Milan, doing on this list?

We’ll be the first to admit that Frank De Boer has endured somewhat of a shocker since leaving his post at Ajax, so much so that he’s been forced to flee the continent in pursuit of rejuvenation in America, although he’s endured a sluggish start at the helm of defending MLS champions Atlanta United.

However, you may be surprised to hear that De Boer enjoyed a stunning start to life in the dugout. He led Ajax to four successive Eredivisie titles in his first four seasons in the managerial area - the only manager to achieve this feat.

As a player he spent four years at Barcelona, but is unlikely to return as manager any time soon...

Phillip Cocu lifted three Dutch titles with PSV, and the cup, but then lasted just 16 games at Fenerbache, and has been out-of-work since October.

Staying in Holland we have Giovanni van Bronckhorst, another Eredivisie winner, and double cup triumphant who is currently battling it out with Ajax for another title.

Difficult to call Ernesto Valverde a legend, as he only spent a couple of years at the club, but he returned as manager in 2017, won the double and is currently on course for a treble.