Football
News
Zaha is adored by the Crystal Palace fans for his work on and off the pitch
Conor Keane
08:00, 04 Apr 2022

When Crystal Palace welcome Arsenal to Selhurst Park this evening, Eagles star Wilfried Zaha will get a shot at disrupting the top four hopes of a club that almost provided his dream move a few years ago.

The Ivory Coast international was close to joining the Gunners in 2019 before they opted for the club-record £72 million capture of his international teammate Nicolas Pepe from Lille - something that hasn’t quite gone to plan. Zaha had previously revealed that he was an Arsenal fan as a child and at the time when he was heavily linked with a move north of the River Thames, it seemed that he was going to be making a switch to the Emirates Stadium.

It would have been a tough one to take for Palace fans but from an outside perspective it was understandable to see why the player would have been open to a move because at the time, Zaha was the club’s only game-changing player and the football under Roy Hodgson wasn’t the most exciting. He was a consistent performer for the Eagles and entering the prime years of his career, there was always going to be a time when he would consider a new venture.

As we know, nothing materialised and the Palace fans will be glad it didn’t because the 29-year-old is held in such high regard around Croydon. He may be in his second spell with the club but he was a product of the academy and spent most of his childhood in South London after his family moved from the Ivory Coast when he was four years old. He joined the Palace academy at the age of 12 in 2004 before breaking into the first team in 2010 and quickly became one of English football’s hottest prospects. 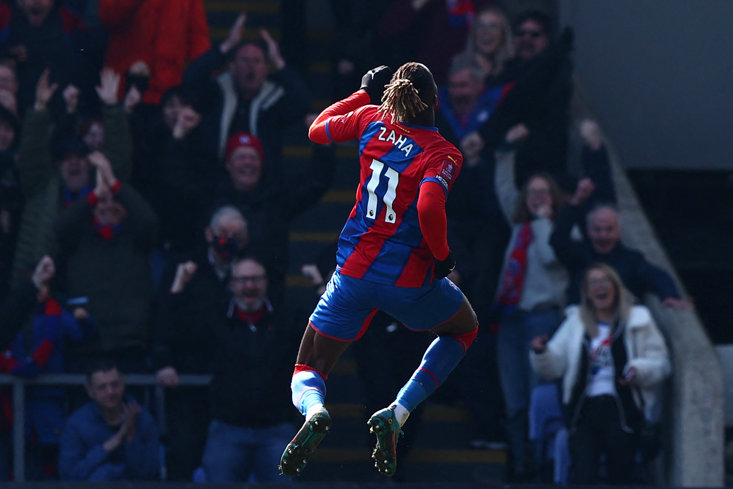 His love affair with the club took a short break when he joined Manchester United which, as we all know didn’t work out and within a year he was back in SE25, first on loan before returning permanently the following summer where he has continued to shine and be Palace’s leading man and the local hero who the fans completely adore, especially for the positive work he does in the local community with 10% of his salary going to UK charities. This love seems unconditional and something that he likely never would have received at Arsenal, while just being a squad player rather than a key man.

Zaha also seems to be a lot happier at Palace thanks to the revolution that has been initiated by current boss Patrick Vieira’s arrival and he has already assembled a squad with young, talented individuals to compliment and help share the attacking burden that the Ivorian has carried single handed in recent years. The summer recruits of Michael Olise and Conor Gallagher have helped transform Palace into a more exciting team to watch and it has helped Zaha massively. His impact at Palace cannot be overstated and it is clear to see why he is loved by the fans, as his numbers are quite impressive. In the 255 appearances he has made for them in the top-flight for the Eagles and he has scored 56 times, while having provided 26 assists.

Speaking to The Sportsman, Palace Xtra said: “Since returning to the club from Manchester United, Zaha has been the pinnacle point of the team and we struggled to win without him for years. However, there is less reliance on him this season with the likes of Olise and Gallagher influencing the team. Zaha has 9 league goals this season, which goes to show how important he is, despite not being the main player this season.”

Referring to the strong bond between the fans and Zaha, Palace Xtra added: “ ‘He gets it!’ - most fans would say the connection stems from the passion and work in the community he does.”

Three years ago he may have been prepared to say goodbye to Selhurst Park for a second time but with the upward trajectory that the club are on, Zaha may be glad that he stayed around after his failed move to the Gunners and his patience has seemingly paid off.