Mark Selby has challenged Sport England to start funding snooker properly – or risk seeing a trail of wasted talent while Chinese youngsters collect all the silverware.

But it also highlighted the dearth of 18-24-year-old players in the UK that exhibit the same skill levels and have already shown themselves to be proven winners on the big stage.

Governing body the WPBSA have for many years been aggrieved at the near-total lack of funding for grass-roots compared to huge sums invested in youth in Asia.

And after beating Sean Maddocks 4-1 on Monday at a Scottish Open oddly being staged in Llandudno, Selby said: “I would ask Sport England to invest as much as they can.

“Snooker is a sport, one of many I know. But a lot of kids out there like snooker, they just can’t progress if they don’t have access – and then talent goes to waste. Even if support creates just one young champion coming through, that must be worth it.

“I just don’t know what the reason is that they give snooker hardly any funding, it’s beyond me. They clearly have the money to support so many other sports. It’s a real shame.

“I am sure there are talented young British kids out there not getting a real chance for that reason, be it access or other things.

“When I was a kid my dad didn’t have much money, and there was no other help – I was just very lucky that Malcolm Thorne looked after me in Leicester and gave me free table time. If he hadn’t, I wouldn’t be here today.

“Snooker has great viewing figures, great participation – but something is up out there. Ronnie O’Sullivan took decades to get on the Sports Personality shortlist. It feels like there is a reason we get overlooked for these things.

“And there are benefits to the whole community at every age and level. But you are just not seeing young players any more at my club, that is really disappointing.

“It feels like currently at the elite level it has never been better, but at the grass-roots level there is a real problem in the UK. We don’t have talented young pros that are already proven event winners in that 18-24 age range.

“Fergal O’Brien said to me the other day if there was a choice between playing a Chinese 17-year-old or a British 17-year-old you hadn’t heard of, you’d choose the British one without seeing them. You’d assume the Chinese one was better. But we shouldn’t be thinking like that.” 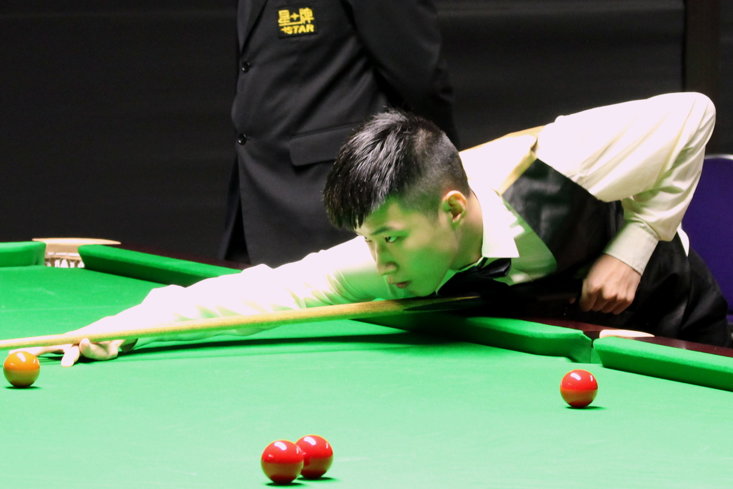 WPBSA chairman Jason Ferguson also believes the latest major success for a Chinese youngster needs to be a big wake-up call in the UK.

He said: “I would never like to say that we won’t produce any champions without some proper funding from Sport England – but there will be less of them.

“With 128 players on tour there will inevitably be more players from all over the world where that investment is happening. We risk having far fewer UK players on tour.

“There is a direct link between the huge investment of public money into grass-roots snooker in China, and the current success and standard of players produced.

“It is no coincidence at all, and you see that in all sport all over the world. There is a huge age gap between some of the older UK players and the new talent coming through.

“And that is directly linked to the lack of funding coming through in the UK, relative to China and Asia more generally. It shows, in access to facilities and many other ways.

“I look down the high street and I see lots of empty shops and office buildings. Some of these would be ideal for cuesports for young and old alike.

“We have two young Chinese champions of our main three tournaments currently, and both were students of a government-funded academy in China of which we are a partner.

“That system has grown much faster in China than anywhere else in the world. And it is because of the investment in grass roots.

“We put small tables in schools or other projects, but it is not a bottomless pit for a small organisation.

“And we want to do more, but we want access to funding as other sports get and it will pay huge dividends if we can get it right

“Without any significant funding we are giving ourselves in global terms huge hurdles to overcome.

“The new English Partnership for Snooker and Billiards was recently formed in a restructure to be the single representing body to apply for funding from Sport England, and approved as such.

“If we are going to look for funding that comes with a lot of work and rightly a lot of scrutiny you need a strong, well-managed body.”

x
Suggested Searches:
Manchester United
Liverpool
Manchester City
Marcus Rashford
Premier League
More
snooker
Barry Hawkins Digs Deep To Book Masters Final Showdown With...
Barry Hawkins took his place in the Masters final after coming through yet another Alexandra Palace [ ... ]
snooker
Paul Hunter: The Great Man The Masters Trophy Is Appropriately...
Among many poignant moments at the 2022 Masters at Alexandra Palace, one perhaps stood out above all [ ... ]
snooker
Robertson Wins Masters Thriller To Reach Final But Celebration...
Neil Robertson produced an astonishing comeback to reach the Masters final by beating Mark Williams [ ... ]
snooker
World Number One Mark Selby To Seek Help Over Mental Health...
World No1 Mark Selby has revealed he will be seeking help over the current state of his mental health. [ ... ]
snooker
Neil Robertson Vows To Jump In Icy Alexandra Palace Lake If...
Neil Robertson has vowed to jump into the icy Alexandra Palace boating lake if he wins a second Masters [ ... ]
snooker
Judd Trump Insists Masters Atmosphere Is More Like Boxing Than...
Judd Trump laid out rival Kyren Wilson with a series of hammer blows on Friday – and then insisted [ ... ]
snooker
Masters 2022: Williams Edges Out Old Rival Higgins In An Alexandra...
Both Mark Williams and John Higgins testified to one of the most extraordinary atmospheres ever seen [ ... ]
snooker
Neil Robertson: Ashes and Michael Jordan Inspired Me Against...
Australia’s Neil Robertson took inspiration from both the Ashes and sporting legend Michael Jordan [ ... ]
snooker
Kyren Wilson Relishing Masters Clash With Rival Judd Trump
Kyren Wilson became the second man to scrape into the Masters quarter-finals on Wednesday – as [ ... ]
snooker
Judd Trump Edges Into Quarter-Finals But Mark Allen Still Smiling...
Mark Allen was still smiling on Wednesday night despite an agonising Masters final-frame defeat to Judd [ ... ]
snooker
Masters 2022: Snooker’s Class Of 1992 Still Thrilling Crowds...
All three of snooker’s famous Class of 1992 of Ronnie O’Sullivan, John Higgins and Mark [ ... ]
snooker
Ronnie O'Sullivan Wows Rolling Stones Pal Ronnie Wood With Masters...
Ronnie O’Sullivan wowed Rolling Stone Ronnie Wood as the Rocket got his bid for an eighth Masters [ ... ]
snooker
Shaun Murphy: Masters Defeat Is Just More Pain On Top Of Back...
It wasn’t just the pain of a disappointing Masters first-round defeat to Barry Hawkins that was [ ... ]
snooker
Ranking The Five Greatest Masters Finals - Featuring Williams,...
There were some near misses, and I have chosen to leave out the superb comeback victory for a 39-year-old [ ... ]
snooker
Masters 2022: History-Making Higgins Books His Place In The...
John Higgins made history when he walked out against reigning UK champion Zhao Xintong at the Masters [ ... ]
snooker
Fired-Up Mark Williams Defeats Wayward Defending Masters Champion...
Defending Masters champion Yan Bingtao had a bad start to his Sunday, getting lost while being [ ... ]
snooker
The Constant Uncertainty Surrounding Djokovic Could Impact His...
Detained and then isolated at Melbourne Airport on arrival from the Middle East, Novak Djokovic has [ ... ]
snooker
Steve Davis Looks Back At His Stunning Masters Win Over O’Sullivan...
Steve Davis still believes his last major tournament win owed plenty to a streaker breaking Ronnie O’Sullivan’s [ ... ]
snooker
Changing Of The Guard: China’s Hopes For Snooker Domination
When Ding Junhui burst onto the snooker scene in spectacular fashion in 2005, many expected the Chinese [ ... ]
snooker
Masters Preview: Can Chinese Whizkid Yan Bingtao Defend His...
Snooker’s big guns will be out in force for this year’s Masters (9-16 January) and for defending [ ... ]
snooker
Ken Doherty - 25 years On From His Greatest Triumph At The Crucible
Ken Doherty will head back to the Crucible Theatre later this year to celebrate the 25th anniversary [ ... ]
snooker
Snooker’s Original ‘Grinder’ Cliff Thorburn Ready To Call It...
Snooker’s original ‘Grinder’ Cliff Thorburn admits he is finally ready to pack away [ ... ]
snooker
Graeme Dott Believes Stephen Hendry Will Be ''Much Better''...
Former world champion Graeme Dott has backed Scottish snooker legend Stephen Hendry to do some serious [ ... ]
snooker
World Number One Mark Selby Won’t Rest While There’s Still History...
Mark Selby insists there is no chance he will ever rest on his snooker laurels while there are titles [ ... ]
snooker
750-1 Upsets, Breakout Stars & World Class Wins: Snooker's Best...
Snooker like all sports to a greater or lesser degree was hit by the Covid pandemic in 2021 – [ ... ]
snooker
Ronnie O’Sullivan – What Changing Of The Guard?
If there is indeed a changing of the guard taking place in snooker, then someone clearly forgot to tell [ ... ]
snooker
Gutsy O’Sullivan Ends Losing Finals Streak And Extends Longevity...
Ronnie O’Sullivan showed true grit on Sunday night to make more history and end a losing streak [ ... ]
snooker
Neil Robertson Recovers From Health Scare To Reach World Grand...
Neil Robertson has revealed a recent health scare left him fearing for his career. The Australian is [ ... ]
snooker
Grafter Not Genius: Ronnie O‘Sullivan Reckons His Work Ethic...
Ronnie O’Sullivan reckons he is more grafter than genius – and that his dedication and commitment [ ... ]
snooker
Belgium's Luca Brecel Piles More Final Misery On Scotland's...
Luca Brecel piled yet more final misery on John Higgins on Sunday night by winning the Scottish Open [ ... ]