Football
News
One of the best footballing derbies in the world is bigger than ever
Elliott Bretland
11:01, 09 Feb 2020

Milan’s two great sides Inter and AC meet in one of the world’s best derbies on Sunday evening. The history, the tradition, the San Siro, it is a rivalry which evokes so much football nostalgia and feeling in one city. From AC’s Van Basten, Gullit and Rijkaard to Inter’s Ronaldo, Vieri and Zamarano, they are two of Italy’s most storied clubs.

Though Milan are still struggling during a lull which has lasted years longer than expected, Inter have recovered from a drop in the 2010s and are gunning for title glory under Antonio Conte as they look to dethrone Juventus. Always one of the most anticipated fixtures in the Serie A calendar, here’s the lowdown on this season’s edition.

A quirk of the rivalry, of course, is that the two sides share a stadium. Widely recognised as one of the best grounds in the world, the 76,000-seater San Siro, also known as the Giuseppe Meazza Stadium, won’t be here forever.

With plans to bulldoze it in the coming years before building a brand new arena, this will be one of the last derby matches played at the site. Milan president Paolo Scaroni told Sky Sports Italy last year: “We’re building a new stadium near the old one. San Siro will be demolished and there will be new buildings in its place.”

Atmospheric, grand and iconic, it’s a football cathedral. It’s sad news for fans across the globe. If you can, make sure you visit before it is gone for good.

The former Manchester United team-mates are now rivals in the Italian capital and both share a steely determination to prove, week after week, goal after goal, they are the best.

Zlatan has made a sensational return to AC having spent two seasons with them until 2012, and, though he turns 40 in 2021, has already been among the goals, netting in a 2-0 win against Cagliari. Lukaku meanwhile, has netted 20 goals for the Nerazzurri since joining this summer, with 16 of those coming in the Italian top-flight.

Foes on the pitch this weekend, it hasn’t stopped Inter’s main man lavishing praise on Ibra ahead of the big match. “Ibra is a champion, I respect him,” Lukaku told Tiki Taka. “In Manchester, I could train every day with him, that was the most beautiful thing for me.

“It will be nice to play against him. He is a great champion and professional.

“For me it’s normal that he can do those things at the age of 38. He works a lot; he always gave me advice when we played together in Manchester.”

It’s set to be a tasty match-up at both ends of the pitch and we just can’t pick a winner here. 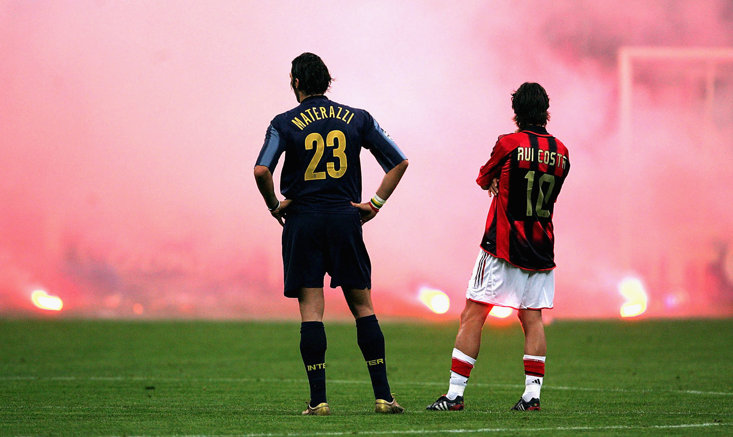 Antonio Conte stormed to the Premier League title with Chelsea in 2017 and has returned to England to build his Inter side.

Taking charge in May, he’s brought in five players from the English top-flight. Victor Moses, who made 34 appearances for the Blues during Conte’s trophy campaign, is a trusted lieutenant of the Italian and has been brought in on loan while he has also raided Manchester United for Lukaku’s goals, Ashley Young’s versatility and Alexis Sanchez’s undoubted worldly talent which needs to be rediscovered.

As well, they swooped for Christian Eriksen from Tottenham. Long linked with a move away, he chose Inter and told Sky in Italy this week: "There's a big chance of winning a trophy here or a bigger chance than where I was of course. I'm here to win and start something new. The last time I won something was at Ajax so it's many years ago. I still remember the feeling so I want to achieve it here as well." Ouch Spurs fans.

Also among the ranks is Borja Valero, who spent three seasons with West Brom. You’d forgotten about him hadn’t you?

Juventus have won the last eight Serie A titles and with Cristiano Ronaldo among their ranks, they started the season as heavy favourites. Now AC, the last side to win the title other than the Bianconeri, are out of the running, already, 22 points off top spot and down in eighth. Inter, however, have been up there all season and are just three points behind Juve going into the weekend’s fixtures.

“They'll fight for the Scudetto to the end,” Andrea Pirlo, who played for both Milan clubs, told Gazzetta dello Sport of Inter. “Conte forces you to give your best at all times, more than you even thought you had. He is obsessed with victory, so when he loses, he becomes a demon. You daren't speak to him.

A derby day victory would keep the pressure on and keep Conte’s angry side at bay.