There have now been 65 years of European Cup competition. 22 clubs have lifted iconic Old Big Ears, the affectionate moniker of the Coupe des Clubs Champions Européens. There have certainly been classic finals: Wembley ‘68, Athens ‘94, 2005 in Istanbul.

Yet none has managed to surpass the European Cup Final’s greatest game, arguably the greatest football match ever played. A 127,000-strong crowd - one of whom was a young Alex Ferguson - congregated inside Hampden Park, Glasgow. The largest attendance ever in the event, there to witness a gluttony of goals with one player contributing a hat-trick and another outdoing his teammate with a haul of four.

No other club is as synonymous with the European Cup as Real Madrid. With 13 trophies, they have won almost double the amount of the tournament as nearest competitor AC Milan. Blancos’ alumni such as Iker Casillas, Raúl and Cristiano Ronaldo, have hit personal and competition-defining benchmarks.

Go back to where it all began, the 1955/1956 campaign. With the birth of the European Cup there would be five different venues over the next five seasons, in five different countries, with five different finalists. The outcome remained the same. When Real Madrid reach a European final, it’s virtually written that they’ll be victorious, with Los Blancos not having had to do the walk of shame since 1981, with seven successive triumphs when reaching that stage in the time since.

The reformatted and rebranded Champions League waited 22-years for a back-to-back winner, before Real went on a three-peat in the 2010s. Half a century earlier in 1957, only the second year of the competition, Madrid became the first of only two clubs to win the tournament at their home ground (the other being Internazionale at San Siro in ‘65), defeating Fiorentina 2-0 at the Santiago Bernabéu Stadium, which they had moved into exactly ten years earlier.

It was Real Madrid’s cup, Real Madrid’s crown. Fiorentina, Milan, Reims (twice), and then, that colossal culmination. When Real Madrid became the apex European predator that night in Scotland 60 years ago on May 18, 1960, and Eintracht Frankfurt their unwitting prey. 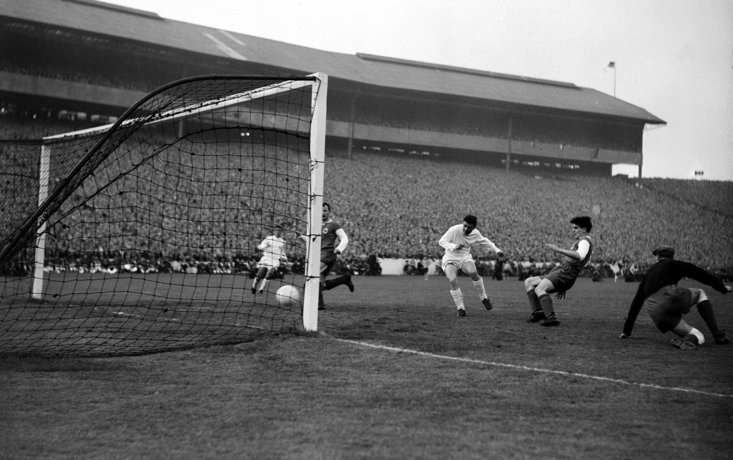 Eight years earlier, in 1952, symbolically Real Madrid’s semicentennial, the club participated in the Pequeña Copa del Mundo (the Small Club World Cup), a round-robin tournament debuting in Venezuela. Alongside Real Madrid as one of four teams competing were the Colombian Campeonato Profesional champions Millonarios. Though Madrid won the tie 4-2, the Albiazules fielded an Argentinian player who would become forever embedded in Real lore, and the greatest player in their illustrious history.

The year later, through the persistence of President Bernabéu, ‘The Arrow’ Alfredo Di Stéfano, a legend in the making, was a Blanco.

“He was a striker, a midfielder, and a defender,” said teammate Pachín of the Barracas-born player, “Technically he was world class and the speed he has was impressive. And he just loved scoring goals.”

Di Stéfano scored a record 49 goals in 59 European Cup games, and left Madrid in 1964 with eight league titles and 216 goals in 282 league games. In 1954, Real Madrid won their first Spanish league title in 21 seasons. They retained it the next year and would go on to win it a further six times in the next nine campaigns. And the burgeoning empire had its prince.

Di Stéfano received a brace of Ballon d'Ors (1957 and 1959) as he was certified as the best player in the world, his Real records standing until the days of Messrs Raul and Ronaldo. It is his still unmatched triumph as the brightest of stars in a team that conquered and ruled Europe for five years in a row that sets the late, great man apart.

It was an era when almost-mythological footballers were fruitful. Di Stéfano would have his partner-in-crime, Ferenc Puskás, the superlative-defying Hungarian footballer who arrived at Madrid in 1958 as a 31-year-old and 12 kilograms overweight.

“Everyone said he was overweight, carrying excess,” commented Di Stéfano, “Well from being a fatty, he turned out to be a phenomenon.” 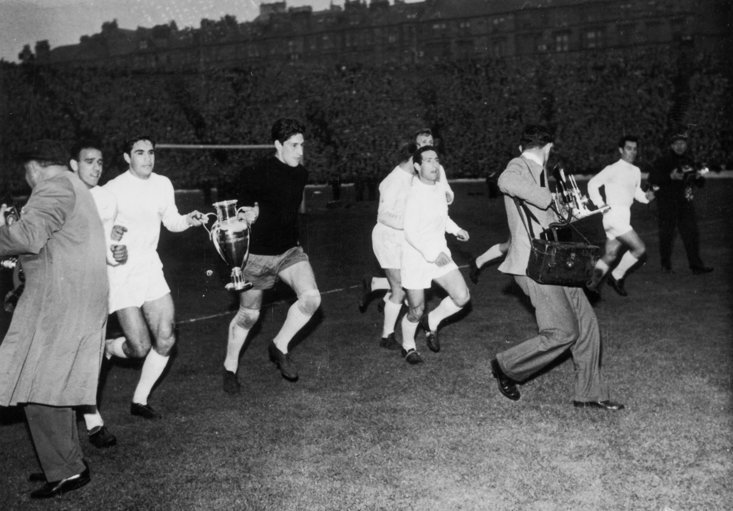 REAL MADRID PLAYERS CELEBRATE ON THE PITCH WITH THE TROPHY

To this day, Di Stéfano and Puskás still stand at third and fifth on Real Madrid’s all-time top goalscorer’s list, respectively. On that night in Glasgow, though Di Stéfano and Puskás would share the glory by providing all of Real’s seven goals between them, it was the benefit and mutual contribution of an almost peerless ensemble, including the dynamic winger Francisco Gento.

In addition, former Madrid footballer Miguel Muñoz, already with three European Cups under his belt as a player with the club, had again become the new Real Madrid manager just the month before. His first stint had been the year before, following Luis Carniglia’s departure. Muñoz’ second-term however would last 14 years and mark him as the standard-bearer of all Real Madrid managers to follow.

A quality match isn’t defined by a whitewash, it is provided by two competitive and well-matched sides with ample individual quality. Eintracht Frankfurt had demolished Rangers 12-4 on aggregate and in the final initially put the frighteners on Real Madrid, forcing Merengues goalkeeper Rogelio Dominguez into a succession of saves before Richard Kress put the German side ahead on 18 minutes with an excellent close-range finish. Frankfurt were then unfortunate to not go 2-0 up when a shot ricocheted off the post.

Real and Di Stéfano however quickly responded to score two of their own before the half-hour mark, then an eye-watering four from Puskás eventually made the score 6-1.  Stein got one back for Eintracht after 72 minutes but Di Stéfano responded for his hat-trick three minutes later, before Stein nipped in to intercept a bad back pass and slot past Dominguez.

Frankfurt’s Erwin Stein scored either side of Di Stéfano making his hattrick, 15 minutes from time, making it a magnificent seven from the two Real Madrid forwards. In a single match, the pair became two of only three players ever to score at least a hat-trick in a European Cup Final.

"It's just a pity that the thousands of people at the game, and who have to return to watching Scottish football, must have thought that they were dreaming,” wrote The Daily Mail in their match report.

Selflessly, with Real Madrid collecting their fifth European Cup in a row, Puskás had handed the match ball to Stein.

“He scored four, I scored a hattrick,” said Di Stéfano about his striking comrade, “He beat me by one. He was amazing.”

The same year Real Madrid won the inaugural edition of the Intercontinental Cup beating Peñarol de Montevideo 5-1, to become the first club world champions. Madrid would win yet another European Cup just six years later, what followed was a 32-year hiatus from the pinnacle of club football. The drought instead allowed the legend of that game in Glasgow, of Gento, of Muñoz, of Pachín, of Puskás, of Di Stéfano, to truly ferment.

“I don’t think ten goals will ever be scored again in the final of a European Cup,” said Pachín, “I really don’t. Nothing’s impossible in football.