Sports
Features
Every year on April 27, fans and teams honour the most famous baseball player of them all
Jack Porter
11:40, 27 Apr 2020

“He was an original in every way. He had a librarian’s legs, an oversized head, wrists thick as pipes and a moon-shaped face so ugly it was lovable.”

This particularly flattering description was how a dedicated SportsCentury episode introduced the man known the whole world over, Babe Ruth.

The ESPN series was building towards its conclusion in its countdown of the 50 Greatest North American athletes of the 20th century. The perpetual paragon of America’s pastime baseball Ruth, unsurprisingly, was in contention for top-spot.

“When he stood at the batter’s box he seemed to have just grown out of the Earth, a primitive statue,” it continued, “But when he swung, sweet music played. And when he smiled, he lit up a nation.”

In the U.S.A, April 27 continues to be celebrated as Babe Ruth Day.

‘The Bambino’ is still considered the father of modern baseball. The Babe picked up the state of the sport, emerging as an almost messianic figure in the aftermath of the notorious 1919 Black Sox Scandal (in which eight members of the Chicago White Sox were indicted for throwing the World Series), as well as within the readjustment period following the First World War which saw mass unemployment, industrial strikes, and race riots across the country.

Babe Ruth brought people back to the ballpark. Regardless of stats, records, and wins, Ruth’s main and most important effect that few, if any, in sport can emulate, was his effect on the popularity of the game.
Arguably his only main rivals in this regard are Michael Jordan and Pelé.

By the time the 1920s rolled around Ruth had almost single-handedly changed the ethos of baseball, revitalising it after ‘the dead-ball era’ of the first two decades of the century that had favoured tactical hits and the running game.

Ruth also struck out over 1300 times in his career. “Babe Ruth was not afraid to strike out. And it was this fearlessness that contributed to his remarkable career,” the author Simon Sinek wrote. 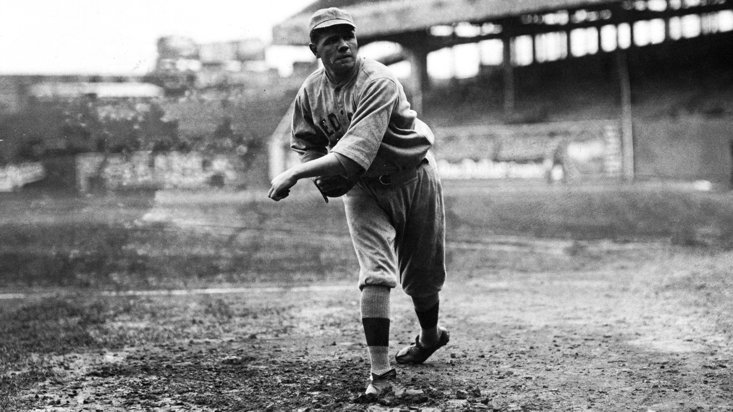 'The Sultan Of Swat' In Action for the boston red sox

Though he spent five years at Wrigley Field with the Boston Red Sox in the mid to late ‘10s, Ruth is synonymous with the New York Yankees. In his 15 years with the franchise, Ruth helped the team win seven American League (AL) pennants and four World Series championships.

Across the diaspora of American sports, the isolatory nature that closes off competition from the rest of the world is synonymously attractive and repellent, it allows the system to work effectively but refuses it the universality of football, cricket, or rugby. The idea of calling something the ‘World Series’ contested purely in North America makes those not enamoured gag. The audacity to move a franchise across the country, when the locality of a team, the geographical tribalism, is how the majority of other sports’ supporters function.

But within this secular bubble created, these barricaded pastures, idols are more easily created, legends are allowed to ferment and be nourished. The consequent mythologising of Babe Ruth’s life and career gives The Iliad a run for its money.

George Herman Ruth Jr. was born 120 years after the start of the War of Independence in 1776. The U.S.A was a country still in its relative infancy. Powerful, granted, but young, it hadn’t yet fully carved out its image. With the repression and eradication of the Native American people, the stories, legends, and gloriously intangible history have been silenced.

The United States of America doesn’t have a King Arthur, KintarÅ, Cúchulainn, or Perseus.

Babe Ruth is the first sportstar, the template, of what the USA now does better than anyone: mythologise, eulogize and romanticize, in the modern factory production of golden calves.

Though there were stars of the diamond before him - Ty Cobb, Honus Wagner - Ruth blended the celebrity and the humanity. He was an approachable, touchable deity.

In the era of Gatsby, Babe Ruth was the largest in a salmagundi of larger than life characters that peppered and established ‘the Roaring Twenties’ - Charles Lindbergh, Al Capone, Douglas Fairbanks, Duke Ellington, Salvador Dali - and certainly the most relatable, though in 1930, at the height of The Great Depression he was making more money than President Herbert Hoover.

Babe Ruth put the bat down in 1935. Today, he remains third on the home run list, 10th in batting average (.342), second on the run bat in (RBI) list, and still holds the Major League Baseball career slugging percentage record (.690).

Even before his retirement Babe Ruth had been treated as the benchmark, the name uttered in any comparison not just within baseball but an individual’s effect on a certain sport. Even those who have never watched a game of baseball know the name. It transcends the sport, it transcends the nation.

In the year of his death, The Babe Ruth Story was released in cinemas, that helped espouse the (inaccurate] account of him stepping up to the plate, pointing out to place out where he was going to hit his homer, and duly doing so. The original Yankee Stadium, used until 2008 was dubbed, "The House That Ruth Built".

On April 27, 1947, at the behest of Commissioner Happy Chandler, the New York Yankees hosted “Babe Ruth Day”, a national event in honour of the man who made the country fall in love with baseball.

Ruth attended the ceremony at Yankee Stadium. He was now suffering from nasopharyngeal cancer, though doctors and his family hid his condition from him. Ruth, gaunt, weak and looking far older than his 51 years, urged the 58,399 packed in - the season’s highest attendance - to truly appreciate “Your national pastime, the only real game I think in the world.”

When he started to speak the loudspeakers’ volume was turned up in order everybody outside congregated in the Bronx, so that masses for blocks around could hear the man speak. A train above the platform overlooking Yankee Stadium halted, people stopped in their tracks, just to listen. 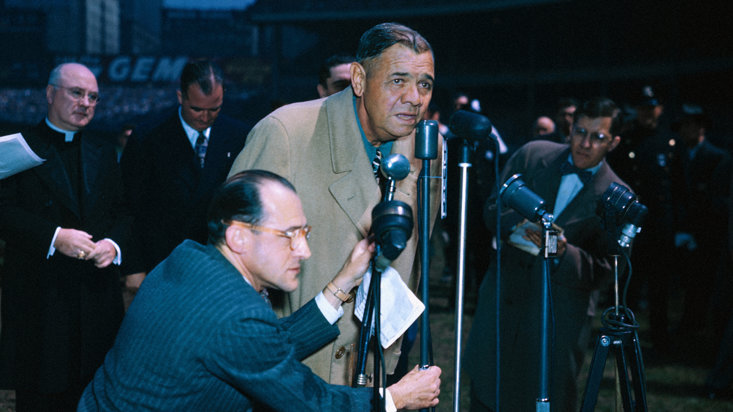 Ruth would only be in ‘his house’ one more time, a year later on June 13th, 1948, when the Yankees retired Babe’s number 3. A little over two months later, Babe Ruth passed away.

"Every big leaguer and his wife should teach their children to pray.