What do you do when your team are already through and you're sent on a 3,700-mile trip to Kazakhstan? Ole Gunnar Solskjaer’s answer was to stand down his first-team troops and call on the kids… en masse.

Manchester United’s Europa League clash with FC Astana on Thursday afternoon could feature up to 10 debutants after Solskjaer decided to leave most of his regular senior players at home. The Norwegian’s 18-man squad includes only three outfield players over the age of 19, those being England full-back Luke Shaw and academy products Axel Tuanzebe and Jesse Lingard, the latter being handed the captain’s armband for the first time.

But who are the 10 youth players who could make their senior bows in Kazakhstan? While Max Taylor’s inspirational tale has already been told, there are nine others who may need some form of introduction even for a set of fans who have grown used to a burgeoning academy system. Across 82 straight years and almost 4000 games in a row, the 20-time English champions have incorporated at least one youth player into their first-team matchday squad.

Here’s the latest cluster hoping to join that long line of luminaries.

Laird, an 18-year-old full-back, is one of that youthful triptych who have been guaranteed a place in the starting XI by Solskjaer, having initially been granted a place in the first-team squad in United’s previous group game against Partizan Belgrade. Noted for being blessed with exceptional pace, the bustling Englishman is likely to start at right-back.

Spaniard Puigmal had impressed in the Espanyol youth set-up, with his stirring performance in a Med Cup match against United in 2017 earning him a move to the Red Devils. The versatile midfielder, capable with both feet, favours a central role but can also play at right-back.

Not yet 19, he is a fan of United’s record-signing Paul Pogba and described hearing the news of his transfer to Manchester as “the best moment of my life”.

Five goals in 20 appearances (13 from off the bench) were enough to earn the winger his first professional contract in the summer of 2018. Mellor is a Manc lad and has already endeared himself to those following the academy having scored against Liverpool and been part of the set-up which won the Premier League North at under-18 level.

He is naturally right-footed but can play on either side of the park, is confident in possession and supplies more than his fair share of assists.

The 19-year-old Kovar will be hoping his career with the Red Devils is brighter than that of the Chilean misfit. He’s already got more silverware, having been part of the United team that won the Under-18 Premier League North title, which earned him a promotion to the Under-23s set-up.

Galbraith is a defensive midfielder from Northern Ireland, a fundamental part of the Under-23s set-up (a goal against Man City doesn’t go amiss), and has already made his bow on the international stage.

National team manager Michael O’Neill called the 18 year-old up to the senior side off the bench against Luxembourg in September. With many fans crying out for a decent holding midfielder - move over Matic, forget Fred - is Galbraith the future Manchester United yearn? Are we looking at a brand new ‘Belfast Boy’?

Another confirmed starter against Astana, London-lad Bernard will seemingly partner Tuanzebe at centre-back. The 19-year-old was snatched from rivals Chelsea in July 2017 and in fact went on to score against the west London club in a 4-3 FA Youth Cup win in December 2018. This season his appearances in the under-21s’ debut campaign in the EFL Trophy have both resulted in clean sheets. 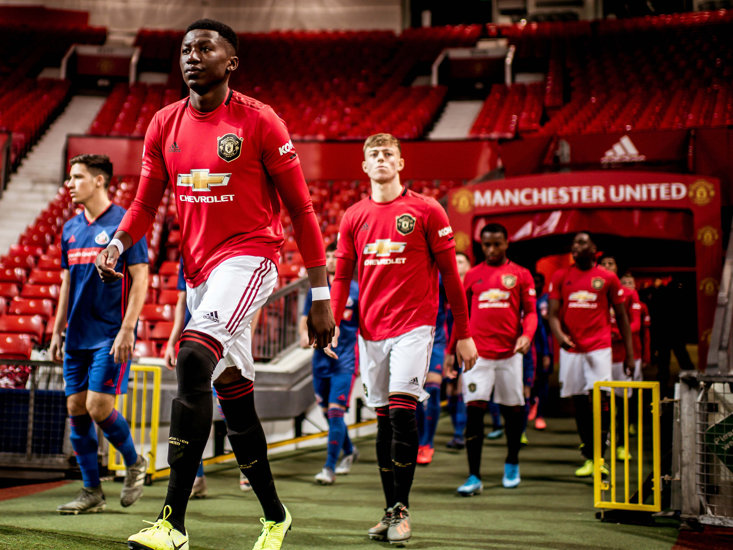 Di'Shon Bernard leads out the Under 23s

Ole Gunnar Solskjaer was in attendance when the 5’4” winger scored twice in a 3-0 win over Sunderland’s under-23s earlier this season, and Ramazani currently has nine goals in 13 starts for Neil Wood’s reserves. One to certainly keep an eye on if he comes off the bench!

Man Utd have had success with Welsh midfielders before, haven’t they?

Bodelwyddan-born Levitt has already joined up with bonafide Red Devil legend Ryan Giggs, thanks to the Wales national team manager’s decision to select him for the squad for a number of Euro 2020 qualifiers.

Operating in the centre of midfield, the 19-year-old has missed just two games of the under-23s’ Premier League campaign, registering three goals and four assists, and has adorned the captain’s armband twice. He has been assured a place in the starting line-up on Thursday.

If centre-back Mengi makes it onto the field at the Astana Arena he will break Dylan Levitt’s record for the highest shirt number in United’s history.

The 17-year old is another Manchester lad, and regularly partners Di’Shon Bernard at the heart of defence for the under-23 side with both having stepped up from the under-18s after the departures of Ro-Shaun Williams and Regan Poole earlier in 2019. 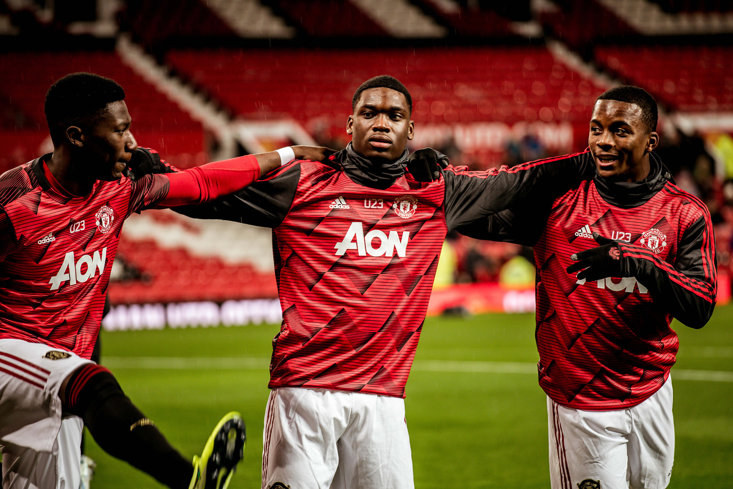 Di'Shon Bernard, Teden Mengi, Ethan Laird
x
Suggested Searches:
Tyson Fury
Manchester United
Marcus Rashford
Lewis Hamilton
F1
Air Jordan
More
boxing
Outside The Ropes: Natasha Jonas - The Olympian, The Fighter...
The Sportsman delves deeper into the world of professional boxing to uncover the stories away from the [ ... ]
golf
Lazarus With A Five Iron: Tiger Roars Back At The Masters On...
On April 14 2019, the weather was looming ominously in Augusta, Georgia. The only thunder that ultimately [ ... ]
football
Ryan Giggs And The Greatest Goal In FA Cup History
Across his 24 seasons and over 900 appearances as a mainstay of the Manchester United squad, Ryan Giggs [ ... ]
boxing
The Suzie Q To The Hammer, Five Signature Punches That Changed...
The art of punching has moved on leaps and bounds since John L Sullivan won the first heavyweight title [ ... ]
football
Frank Warren On Being Shot, Benn v McClellan And Retirement...
Legendary boxing promoter Frank Warren will take centre stage this weekend as his documentary ‘Make [ ... ]
football
The Big Interview: Jamie Carragher On England Regret, Liverpool...
The Sportsman were lucky enough to sit down for a lengthy chat with former England international, Liverpool [ ... ]
football
On This Day: A 17-Year-Old Alan Shearer Announces Himself To...
On April 8, 1988, a relatively unknown and somewhat scrawny teenager by the name of Alan Shearer, opened [ ... ]
golf
“Hello World, Huh?” When Tiger Woods Announced His Arrival On...
The north suburb of Brown Deer, Wisconsin, at the Brown Deer Park Golf Course.  A stage has been [ ... ]
football
Jamie Carragher On England’s Euro 2020 Hopes, Southgate And...
“Listen, all this nonsense that people talk about you have got to play the best teams to win it, [ ... ]
boxing
When Buster Douglas Shocked The Boxing World By Beating Iron...
What do you do when you’re given a 42/1 ‘not-a-chance-in-hell’ price for victory?  [ ... ]
boxing
The Hardest Puncher Ever Born: The Sportsman Interviews Earnie...
It was in 1977 at Madison Square Garden that Shavers pushed Muhammad Ali all the way to fifteen [ ... ]
football
EXCLUSIVE: FC Porto's Toni Martinez Talks Champions League,...
Toni Martinez let out a roar of elation. On his knees and with clenched fists, the emotion poured out [ ... ]
football
Rushie To Everton And Diego Dates Madonna - The Best Footballing...
It was the equivalent of Virgil van Dijk appearing on the front cover of FourFourTwo in a [ ... ]
boxing
Outside The Ropes: Steve Wood - The Promoter, The Manager And...
The Sportsman delves deeper into the world of professional boxing to uncover the stories away from the [ ... ]
motorsport
From Senna to Schumacher - The Five F1 Families That Changed...
On 31 March 2001, at Interlagos, Ferrari driver Michael Schumacher recorded his seventh consecutive [ ... ]
football
Ollie Watkins' Former Coach On His Incredible Rise From Non-League...
Ollie Watkins is used to making an immediate impact. Joining sixth-tier side Weston-super-Mare on loan [ ... ]
football
An Ode To Goodison Park As Everton Prepare To Bid Farewell To...
It is finally happening, Everton are leaving the Grand Old lady, Goodison Park, one of the most recognisable [ ... ]
rugby-league
Your Club-By-Club Guide To The 2021 Betfred Super League Season...
Happy New Year! Tonight marks the start of 2021 for Betfred Super League fans, with the first two matches [ ... ]
rugby-league
Your Club-By-Club Guide To The 2021 Betfred Super League Season...
The Betfred Super League is back! Friday brings the first two games of the new season as rugby league’s [ ... ]
football
How A Big Rangers Fan Helped Plot Brora's Huge Cup Giant-Killing...
“I didn’t think it could get any better after last week but it’s definitely [ ... ]
horse-racing
Horse Racing Has Lost A Legend In Sheikh Hamdan Al Maktoum
Sheikh Hamdan bin Rashid Al Maktoum, one of the most influential owner/breeders of flat racing over [ ... ]
rugby-league
How York's Super League Ambition Led O'Hagan To Swap Australia...
Brendan O’Hagan could have taken the easy choice. As Australia was coming out of the other side [ ... ]
athletics
Being Unbeatable To Feeling Broken, Now Jodie Williams Is Ready...
“Do not be afraid to speak up. That is definitely something that I really struggled with, admitting [ ... ]
boxing
Outside The Ropes: Curtis Woodhouse - The Premier League, The...
The Sportsman’s new feature series ‘Outside the Ropes’ delves deeper into the world [ ... ]
football
Balotelli, Boateng and Berlusconi Aiming To Make Monza History...
Monza is a massive part of Formula One history, having hosted Grand Prix races on the iconic [ ... ]
rugby-league
New Stadium And New Ambitions For York City Knights In 2021
It’s hard to believe when stood in the LNER Community Stadium, the new home of the York City Knights, [ ... ]
football
How Lewes FC Are Leading The Football World As The First Among...
“I read a staggering statistic the other day and it was that 0.004 percent of sponsorship [ ... ]
football
Barnsley's CEO On Valerien Ismael's Golden Touch As Reds Close...
“I would be lying if I said I thought this would be as successful as it has been. Did I believe [ ... ]
football
30 Years On From His Man United Debut, Ryan Giggs' Legacy Will...
Ryan Giggs was always destined to be a star.  “Myself and Bryan Robson went to see the youth [ ... ]
darts
From Phil Taylor To Tiger Woods, Five Athletes Who Dominated...
We all adore sport when it is at its most competitive. Close title races, match points and play-offs [ ... ]