The article first appeared in The Sportsman on 25/04/20

It was a fight that attracted the interest of the dual genius of Mark Twain and Charles Dickens. The illegality of it forced its movement to a variety of locations across the country to avoid detection, mentions of it whispered in the bars and backyards, drawing rooms and dockyards. It was to be a gruelling, incessant bare-knuckle bout on a muddy field in Hampshire in front of over a thousand spectators whom had only heard of the event on the grapevine, having to leave on a train before dawn from Waterloo Station with three-guinea tickets that were stamped ‘To Nowhere’.

It is the year before the American Civil War divides a nation. James Buchanan is the 15th President of the United States. Queen Victoria is in the 23rd year of her reign. It’s almost half a century before Cy Young, Babe Ruth and Ty Cobb cemented themselves as the national heroes of America’s Sport, the man credited with inventing basketball hadn’t been born yet, and it is decades before Jacks Dempsey and Johnson are the beau idéals of boxing.

To many, that position instead was taken by John Carmel Heenan. This month marked the 161st anniversary of ‘The Benicia Boy’s’ participation in the first ever world title international boxing match.

Heenan was born to Irish immigrants in West Troy, New York State, somewhere between 1833 and 1835. A fighter of great strength and astonishing punching power, he purportedly gained his resilient but ruffian reputation whilst doing heavy labour as a blacksmith at Watervliet Arsenal and then - after moving West in the Gold Rush - the Pacific Mail Steamship Company. In California he began his bare-knuckle boxing career, where a round would only end once a fighter had been floored. Heenan also acted as a notorious enforcer around Benicia, San Francisco, from which his moniker would derive.

His fame grew to the extent that barbers became inundated with requests to have his hairstyle. Newborn boys were given his name. He was even the subject of a saucy speculation by the press. In Cincinnati, Ohio the boxer met and fell in love with the stage actress Adah Isaacs Menken and the two were married in April 1859. Scandal and newspaper headlines erupted when it was revealed that Menken was not yet divorced from her first husband, who labelled her an “incubus and disgrace”. For her part, the new Mrs Heenan espoused that she was now ”proud and happy to be known as the wife of the bravest man in the world!”

She later became involved with a man who crossed the 1,100 ft Niagara Gorge on a tightrope. 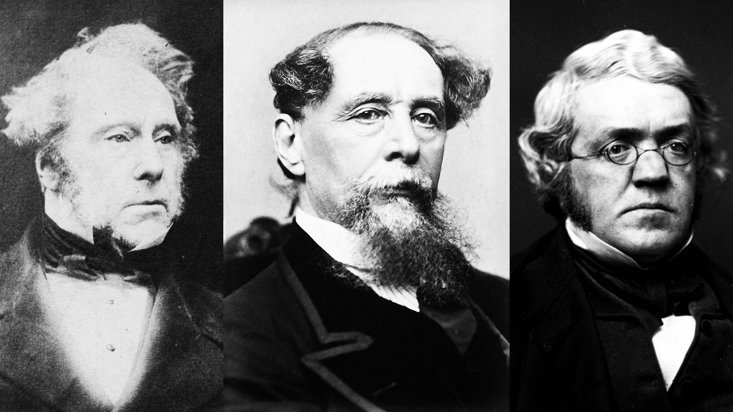 Eventually, Heenan’s trainer Jim Cusick then suggested his fighter try his luck over the Atlantic, where he would face the British champion. A handwritten note from across the pond produced the message: challenge accepted.

It was to be the best that America had to offer against the might of a boxer whose British compatriots believed to be incomparable - Heenan’s opponent was to be a man famous novelist William Makepeace Thackeray, who would himself be in attendance that day, called ‘a god-like Trojan’.

Tom Sayers was a Brighton-born bricklayer who had fought and won all but one of his 16 fights (12 official prizefights) often against stronger and much bigger men. Since 1857 he had held England’s heavyweight crown.

At the time, The Manchester Guardian stated that “no pugilistic contest ever decided has excited so great an interest, both in this and other countries, as the forthcoming conflict between Sayers and Heenan.”

After taking that secret predawn train from Waterloo, purportedly watching on from the sidelines with Thackeray and Charles Dickens - then awaiting the publication of the first installment of his Great Expectations - were the British Prime Minister Lord Palmerston and the Prince of Wales - the future King Edward VII. In amongst a thousand gathered there in Farnborough, they were to witness Heenan and Sayers battle, bruise and bloody each other for a stunning two hours and 27 minutes.

Sayers was injured in the sixth round, Heenan in the seventh.

Police had arrived by the 30th.

The crowd however didn’t take kindly to the authorities attempting to put an end to proceedings and fists were soon flying in and outside of the ring, police and public both taking beatings. 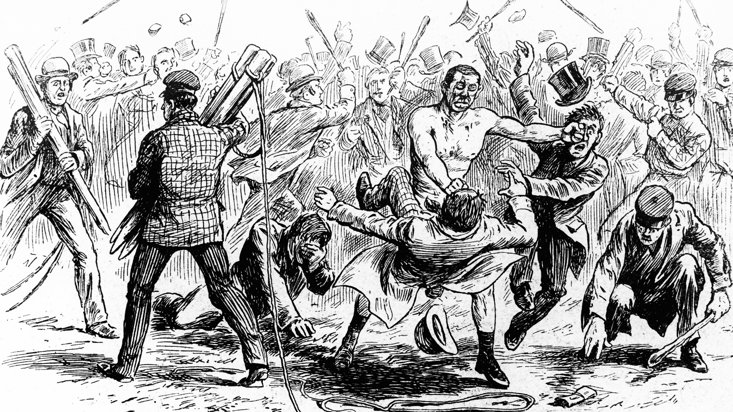 Police arrive by the 30th round and chaos ensues

A draw to Heenan and Sayers match was finally, mercifully, declared in the 37th round, though each camp remained staunch that their man had won. Weeks later, with no agreement forthcoming, each fighter was awarded a Championship Belt.

The ramifications, however, were far greater. The conditions and methods of the fight caused considerable debate in the Houses of Parliament, with Lord Palmerston in particular coming under fire.

Nonetheless, Heenan returned to the USA a hero, re-enacting his fight for the paying public, meeting Abraham Lincoln, and even playing Hamlet on stage (fighting Laertes, somewhat unorthodoxly, of course).

Importantly, as a direct result of the barbarous bout, by 1865 the “Dozen Rules” - better known now as the Queensbury Rules - were drawn up by the London Amateur Athletic Club and were swiftly accepted by Parliament. The code, which involves gloves worn and 10-second counts at a knockdown, still governs the sport today.

That very same year, Tom Sayers died from a diabetes-related illness. Before he passed away, he received a visit at his home in Camden Town. John C. Heenan had returned to Britain and wanted to pay tribute to his opponent of no more than five years prior.

Mark Twain would later reference both fighters of the iconic bout in his 1889 novel A Connecticut Yankee In King Arthur's Court, whilst a folk song would pay tribute to the men who, representing their nations and for the entertainment of a thousand behind The Ship’s Inn, inadvertently helped changed boxing’s history:

"They never were two better men and none could be more game,

they are both gallant heroes of honour and of fame,

Tom Sayers juggled cannon bolts where he was good and strong,

But Heenan played with lightning when his day's work was done."