Boxing
Features
The Mexican doesn't do things the way many expected him to
Gary Quinn
18:00, 03 Nov 2020

The best pound for pound fighter on the planet? Very possibly. The world’s first boxing billionaire? Highly likely. Four-weight world champion Saul ‘Canelo’ Alvarez ignites debate like few other modern fighters. But there’s one thing that can’t be denied, and it’s the fact that the man is the walking, talking (although he never says much) embodiment of a sporting maverick.

From his fighting style to his sense of self worth, there is nobody more single-minded than Canelo….

The teenage prodigy who turned pro at 15

This Mexican warrior has been boxing professionally half his life. He’s still only 30 years old. And yes, if you’ve done the maths correctly (extra points for showing your working out) that means Canelo turned pro at the tender age of 15. In fact, he made his debut just three months after his birthday, in a raw but impressive fourth-round stoppage against a much older and more experienced opponent.

His desire to box came from a difficult place, since red-head Canelo was bullied growing up as he looked different to his peers, and this was how he learned to use his fists. “I fought a lot,” he explained some years later. “I was different, there was name calling and I had to defend myself. For me, the boxing and fighting was something I was born with. It’s in my blood.”

He was a world champion at 20. In your face, bully boys! And there’s plenty more to come from the fighter who’s now won world titles at light middleweight, middleweight, super middleweight and light heavyweight.

Own man, own fighting style 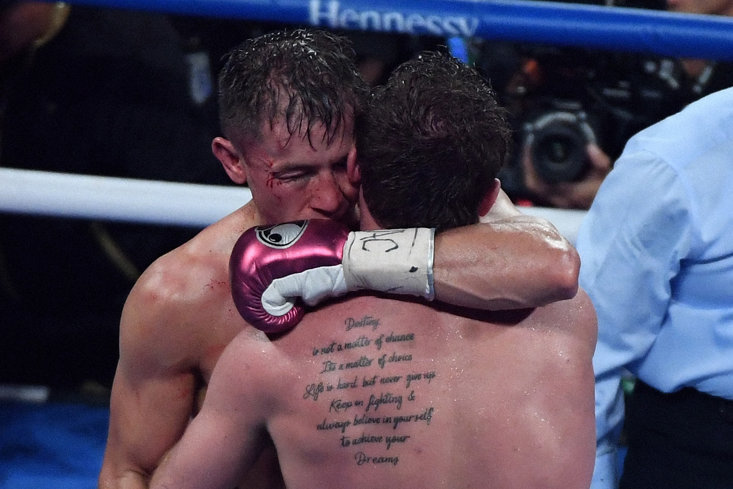 It’s funny how Canelo has spoken in the past about having to defend himself as a kid, because in many ways his boxing style has been built on his defence, his ability to avoid being hit and drill home the counterpunches. His head movement is insane. But it’s a style he’s been called out on, especially back home in his beloved Mexico. Don’t get us wrong, he’s a national hero and beloved by millions, but you know how it is, you can’t keep all the people happy, all the time. And with a population of 126 million, there’s a hell of a lot of people in Mexico.

So the argument runs like this, Canelo doesn’t fight in the traditional Mexican style. He’s not aggressive enough, he doesn’t come forward enough, he doesn’t brawl. Think of the legendary Julio Cesar Chavez, the ‘Lion of Culiacan’, he personifies the so-called Mexican style. Not only is his fighting relentless, but outside the ring he has the all-important Robin Hood appeal. He could still pass as a poor man, despite earning a fortune through the sport. This meant he always remained a folk hero, rather than a star. Mexicans prefer their heroes folky, not starry. Canelo is definitely the latter.

He’s not flashy but he’s never gone for the rags to riches back story either, even though his family are from humble beginnings. He’s always been authentically himself and this is never more true than when he’s in the ring. Intelligent and calculating, Canelo has dismissed talk that Mexicans should only fight in one way, he knows the game is more complicated than that. And he knows the style that he suits best.

365 million reasons why he knows his own worth 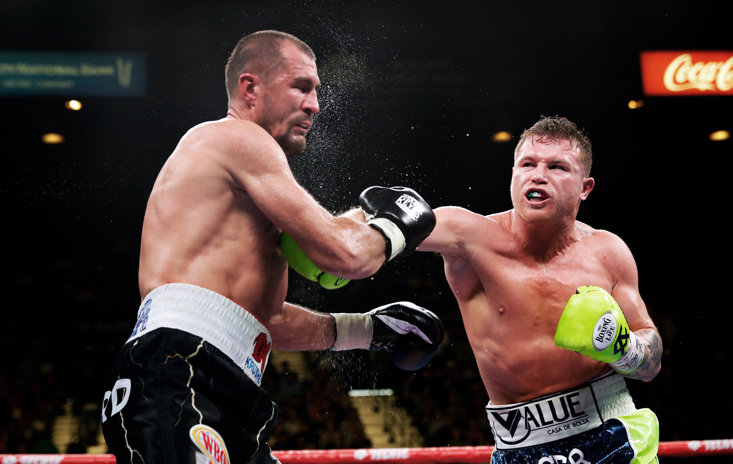 It was the biggest deal in sporting history. Canelo signed up to an 11-fight agreement with streaming service DAZN, for the princely sum of $365m. The contract stated they would pay him $18m for his first fight and he’d then earn $35m in each of his next 10 fights. The figures are mind blowing, but right now nobody knows if they’ll ever come to pass. Because just a few fights into the agreement, it all went batshit crazy.

DAZN want him to have a trilogy fight with his arch-nemesis Gennady Golovkin. The two drew their first battle and Canelo won the second, and a third fight would be massive. But Canelo believes he won the two previous encounters and has no interest in stepping into the ring with Triple G again. But here’s where things get extra complicated, so listen up. Turns out his promoters, Golden Boy Promotions run by Oscar De La Hoya, signed a separate contract with DAZN, agreeing to a third fight between the two greats. When DAZN threatened to pull the plug on the whole deal, what did Canelo do? He did what he does best, he fought back. He launched a $280m breach of contract lawsuit, not only against DAZN but also against Golden Boy Promotions. Nobody messes with Saul ‘Canelo’ Alvarez.

Right now it’s all still up in the air, but hopes are it will get sorted soon and he can get back to letting his boxing do the talking. But remember this, Canelo was prepared to pull the plug on the biggest deal in sporting history because he knows his own mind, because he’ll always be his own man. Nothing screams single-minded more than that.

x
Suggested Searches:
Manchester United
Liverpool
Manchester City
Marcus Rashford
Premier League
More
boxing
From Taming Tyson To Bashing Buster, Evander Holyfield’s Best...
Today marks the 59th birthday of one of the best boxers to lace up a pair of gloves in the modern [ ... ]
football
Fernando Torres - Atletico's Local Hero, Liverpool's Tainted...
‘This means more’ is Liverpool’s oft-derided motto, but when they face Atletico Madrid [ ... ]
football
On This Day In 1987: The Rangers v Celtic Shame Game
Whatever the circumstances when Rangers face their Glasgow neighbours Celtic the [ ... ]
athletics
On This Day In 1968: The Greatest Sporting Protest Of All Time
Some sporting images will stay with us forever. Muhammad Ali standing over Sonny Liston, Michael Jordan’s [ ... ]
football
Dorking Wanderers Aiming To Complete The FA Cup's Ultimate Underdog...
Something is stirring in the sleepy, stockbroker-belt Surrey market town of Dorking. And if the Wanderers [ ... ]
boxing
Outside the Ropes: Jennings Gym - Training, Tunes And Gardening...
Jennings Gym is not your average boxing gym. Tucked away on the ground floor of a former cotton spinning [ ... ]
football
Thierry Henry - ''The Best Player To Have Ever Played In The...
"No, number one is not Alan Shearer - number one is Thierry Henry. Thierry Henry is the best player [ ... ]
football
93.20: The Moment Sergio Aguero Changed English Football
The greatest moment in Premier League history. Sergio Aguero’s goal against Queens Park Rangers [ ... ]
cricket
Assessing England's Ashes Squad: The Strengths And Weaknesses...
So we know the 17-man squad that will go Down Under to try to win the Ashes for England this winter, [ ... ]
rugby-league
Naiqama Seals His Perfect Ending After A Year Of Personal Turmoil
Less than a year ago, Kevin Naiqama looked destined for anything but a fairytale ending to his St Helens [ ... ]
football
Alan Shearer: Newcastle's Boyhood Hero Who Won The Hearts Of...
Footballers in this day and age are judged by how many trophies they win. But when Alan Shearer, the [ ... ]
rugby-league
French RL Ready For Momentous 2022 After Toulouse Promotion...
French rugby league had never known as important a weekend as this one. Catalans Dragons were in their [ ... ]
football
Paul Scholes - The Unassuming Magician Who Ruled The Premier...
England don’t produce these types of players often, but every now and then a footballer will come [ ... ]
football
Frank Lampard - The Intelligent Goalscoring Genius Who Helped...
During the 90s and early 00s, the influx of money into the Premier League had led to a whole new era [ ... ]
football
Roy Keane: The Midfield Enforcer Who Was So Much More
Roy Keane is held up as the defining defensive midfielder of the first half of the Premier League era. [ ... ]
boxing
Bare-Knuckles, Blades And Broughton: The Evolution Of The Boxing...
From oxhide to metal, hemp rope to horse hair, it’s fair to say those shiny, top-of-the-line gloves [ ... ]
football
John Terry - England's Last Truly Great Defender Who Won Everything...
When looking back at John Terry’s footballing career, Chelsea fans can do so with misty eyes. [ ... ]
football
Ashley Cole - From ''Next Tony Adams'' To Chelsea Great Despite...
Ashley Cole was an Arsenal legend in the making. An academy starlet, he rose through the ranks and established [ ... ]
football
Merry Go-Round Or Hornets Go Down? Watford Appoint Yet Another...
The sack race is a hotly-debated topic every year, as fans postulate on which manager will be the first [ ... ]
football
Branislav Ivanovic - Chelsea's Iconic Right Back Turned Prolific...
Branislav Ivanovic’s start to life in London was far from smooth. After joining Chelsea in January [ ... ]
football
13 Goals Conceded, 24 Clean Sheets: Petr Cech's Iconic 2004/05...
This morning we announced Petr Cech as our greatest ever Premier League goalkeeper, as we run through [ ... ]
us-sports
Before LeBron, Kobe, Shaq And Magic There Was Jerry West, The...
Kobe Bryant’s tragic passing at the beginning of 2020 brought calls for the National Basketball [ ... ]
boxing
Muhammad Ali's Fall, Larry Holmes' Rise And Mike Tyson's Revenge
It’s impossible to overstate Muhammad Ali’s impact on the world of boxing. The man [ ... ]
boxing
On This Day In 1975: Ali And Frazier Thrill The Entire World...
More than any other facet of sport, boxing lends itself to delivering nights that become cultural landmarks. [ ... ]
rugby-league
Smith Has ''Fallen Back In Love With Coaching'' With Super League...
When Tony Smith took the Hull KR in 2019, I’ll confess, there was part of me that was asking; [ ... ]
boxing
Boxing’s Most Poignant Night: When Hopkins Outclassed Trinidad...
In April 2001, when Bernard Hopkins and Felix Trinidad knew they would meet each other at Madison Square [ ... ]
rugby-league
The Last Tackle: Who Makes The Grand Final And Who Suffers Semi-Final...
The Last Tackle: And then there were four. We wondered last week if the Betfred Super League eliminators [ ... ]
boxing
Pacquiao: From Poverty-Stricken School Drop-Out To Eight-Weight...
"I knew without a doubt I would become a fighter - I knew that the underdog can, and often does, [ ... ]
football
Bill Shankly - The Teenage Miner, Midfield Star And Managerial...
Bill Shankly wasn’t only a great football manager, you know. He was one hell of a player too. [ ... ]
football
Rooney's Dream Debut: The Night Manchester United's History...
It was a quirk of fate that brought Wayne Rooney to Manchester United in 2004. Sir Alex Ferguson hadn’t [ ... ]