Former UFC heavyweight champion Frank Mir has told The Sportsman of his admiration for WBC world boxing champ Tyson Fury, claiming the Briton is probably the best heavyweight there has ever been.

Fury won the WBC belt in February by defeating Deontay Wilder in Las Vegas after a drawn first encounter. But Mir insists that Fury was the rightful winner of the first fight as well as the second.

“Tyson Fury won the first one. I didn’t agree with the decision, I thought that was bullsh*t. I don’t know how they mathematically made that,” Mir claims. “I thought he would win the second one, but I thought that he would overwhelm him and gas him out, and almost just do his movements to make him miss, throw a lot of strikes but not necessarily to hurt Deontay, but to touch him and make him throw back, extend that energy, especially when he turned up at 231lbs.

“But I didn’t think he would do what he did because that was risky, but there you could see the guy just being a warrior poet: very intelligent, with strategy and movement but then took risks and put his heart on the line. That is why he is the greatest heavyweight right now in the world and probably might have ever been in my opinion.”

Wilder claimed that his heavy walk-up suit exhausted him before the fight, but it’s an explanation Mir isn’t buying.

“If Deontay said the suit gassed him, what about it, what did you not do because of the suit? If he said he broke his hand so I threw more lefts, now you’re not giving me an excuse, you're explaining why you fought a certain way.

“What did impress me was that Deontay’s a world-class act. He’s knocked out everyone he’s ever faced except for Fury. It was a draw but he still knocked him down. Now he’s on the back foot from the opening bell, he’s getting his ass kicked. He didn’t really quit, he stayed in there.

"I’ve seen other fighters get knocked down that are super athletes, successful dominant guys and when they face that adversity, they run from it. This guy faced it in front of millions and he bent down on his mound with mud on his shield. That was impressive, that’s why it’ll be a good fight going forward with Fury.”

Many British fans now want to see Fury face Anthony Joshua in a unification fight, and Mir says he would be tipping Tyson to come through.

“I’m with Tyson Fury still, AJ doesn’t have the greatest of head movement, he gets hit. He has a great left hook and I think his right uppercut is one of his best shots. I don’t see him landing that on Fury because he’s tall and because of his movement. [Fury’s] a f*cking beautiful man. So I think that it would be a good fight.

“I actually think that AJ was happy that Fury beat Wilder, I think Wilder is a horrible fight for AJ, he couldn’t avoid the right hand like Fury does. Look what happened to Luis Ortiz, if you get caught with it, you’re going down... Wilder has the reach and has the strongest right hand that’s ever existed.”

Mir added to The Sportsman that he can envisage five-weight world boxing phenomenon Floyd Mayweather stepping into the octagon at some stage in the future but he might fare poorly if he does make the switch.

Mayweather took on MMA star Conor McGregor in a light-middleweight boxing fight in 2017, and many have speculated that ‘Money’ could return the favour by making the cross-over to UFC for one night only.

And Mir, who holds the record for most submissions in UFC heavyweight history, believes such a match-up could take place.

“Maybe. Money does help, and Floyd likes to spend it. He has a very expensive lifestyle, so there’s always a chance,” Mir explained in an exclusive interview. “He already beat him boxing-wise so to go and lose in an MMA fight is still safe for his brand, so it could possibly happen but I don’t think he’s going to do it for anything less than what he’d make for a boxing match. Why? He could just box him and have another victory.

“You see when he fought his last fight, it’s funny because people are sitting there going ‘Oh, Conor’s winning’ and technically you’re right because he’s throwing more punches and landing them. But he’s not landing them.

"I think he landed one punch of significance in the first three rounds and he was using a lot of energy to not accomplish much... If you’re going to use energy it has to get a result. And that’s not the fault of Conor, Floyd Mayweather is the greatest boxer for that reason, because of that ability to just beat you and not take risks.” 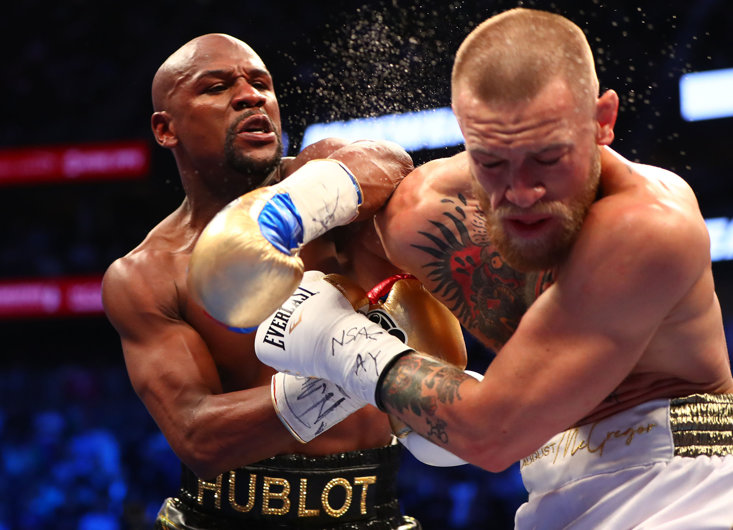 Mir adds that he believes Mayweather would struggle in the octagon.

“I think he would fare very poorly. I think there are other boxers that would a much better job than Floyd would,” he adds. “Floyd’s not really known as a power puncher so he doesn’t really have that power that would scare you off.

"His defence and his movements, and how he avoids and evades strikes, opens up his lead leg, so if Floyd goes with the right hand you just need the low kick really hard. So he’s going to have to readjust his defences on his feet, and when he’s been doing something a certain way since he was a toddler how is he going to make those adjustments? There’s no way. His style is meant purely for boxing.”

Mir himself is approaching retirement at the age of 40. But he has a fair idea what he will do once his fighting days are up.

“I don’t know how many fights I’ve got left. I’ll have to see. I’m going to keep pushing. Why not keep fighting? If someone’s willing to pay then I’ll keep testing myself. After that then there’s just fighting in the gym.

“Coaching and commentary could be next, I listen to the commentators and the only one that is decent and as good as me is Dominic Cruz, the others are just cheerleaders, man. Daniel Cormier is a great coach, better coach than fighter even though he was the number two in the world.

"What a great prestige to have. Sometimes his commentary is ‘Wow Yay look at him ahhh.’ Man you need some pom-poms there, explain what's going on, break down the details.