In 2018, Ireland were almost untouchable. They started their season with an away win in Paris in the opening round of the Six Nations, clinching the match in the third minute of overtime, after 41 phases, with a drop goal from 45m out. A Grand Slam, a first series victory in Australia for 39 years, and a convincing autumn victory over New Zealand followed. Nothing could stop them. Self-belief: thy name is Ireland.

They opened their Six Nations campaign in 2019 widely considered to be the best team in the world. Seemingly filled with confidence, they began the defence of their title at home to England, who had struggled for most of the previous year. The battering, literal and metaphorical, that they took from England took away the breath of spectators as well as players. As the tournament went on, Ireland couldn’t recover, bookending the competition with another hammering away to Wales.

Their form continued to be patchy, even ignoring the World Cup warmup games. Their victory over Scotland in the opening round of the World Cup felt comprehensive but they struggled to impress after that, with humbling defeats at the hands of first Japan and then New Zealand.

The simple summary of all that is that, in 2018, Ireland were filled with self-belief. In 2019, it was knocked out of them and they couldn’t get it back.

But that’s far too simple a diagnosis for sport at this level.

Injuries played a part, with the outstanding Dan Leavy being particularly missed for his work at the breakdown — essential to Ireland’s possession-based game. And the form of half-back pairing Conor Murray and Jonathan Sexton, imperious in 2018, tailed off badly.

Luck plays a role in all these things, of course. That’s why coaches talk about “fine margins”. It’s not just an excuse: the breeze catching your kick a little better or worse can easily be the difference between a win or a loss, a different angle on the camera could change the TMO decision, a freak accident can rid you of your best player. 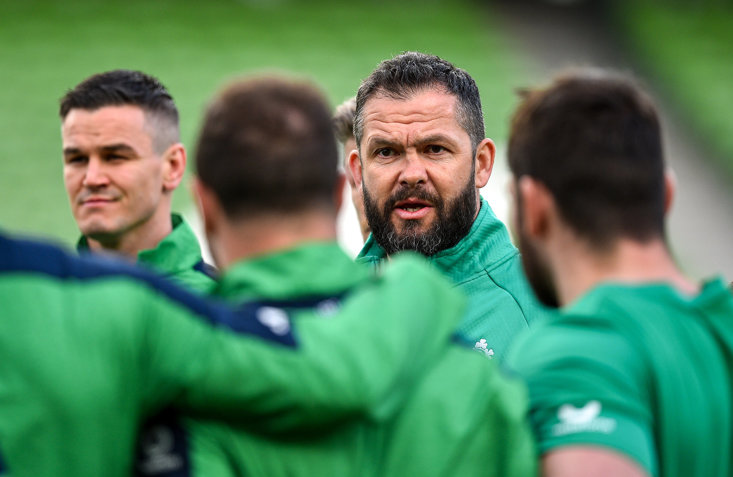 When people say “you make your own luck”, what they really mean is that you give yourself enough breathing room that bad luck doesn’t derail you. You score enough points that one referee decision doesn’t cost you the game, you have enough depth that one player doesn’t destroy your plans, and so on. In 2018, Ireland seemed to be on the right side of that “lucky” divide; in 2019, they weren’t.

Interestingly, from the summer of 2014 to the final pre-RWC warmup game, Ireland didn’t win a match after being behind at half-time. Start well and they could see a game out, go behind and they could never quite catch up.

But there is more to it than that. Sexton didn’t score that drop goal in 2018 because he got lucky, he managed it because he had successfully bossed his team through 41 phases of possession without a single mistake. That takes a huge amount of technical ability as well as belief in the system and the team. Throughout 2019, Sexton was visibly trying to do the same thing but it wasn’t coming off.

One thing that didn’t change between 2018 and 2019 was Ireland’s head coach, Joe Schmidt, undoubtedly the most successful Ireland coach of the modern era — arguably, ever. Those who have worked with Schmidt have spoken repeatedly about the huge respect they hold him in, how he improved their individual games as well as the team’s results.

But they also talk about how exhausting his approach was, how specific his demands were, how they dreaded video analysis after a match. Nobody wants to take away from Schmidt’s superb achievements but the feeling does seem to be that he had depleted their mental reserves after six years of his exacting methods. Paradoxically, his continued presence might have been the reason behind the change in Ireland’s form.

His replacement, Andy Farrell, has a reputation as no-nonsense leader of men and was part of Schmidt’s staff from 2016. However, he has pointedly taken a lighter approach, suggesting there is merit to this assessment of Ireland’s 2019 experience. The team were underwhelming in their opening fixture of the 2020 Six Nations but Farrell praised the way they had stuck at their task rather than highlight the failings. His habit of playing music in training sounds trite but breaking with the previous regime and lightening the mood in camp appears to be working, as players have reported.

Self-belief, like luck, is too simplistic a metric to reduce elite sports performance down to. But sports teams are made up of humans so of course it plays a part, as does positivity throughout the camp. Farrell seems to intuitively understand that and has taken steps to put that one piece of the puzzle into place up front, allowing him to get to work on the other details needed to return Ireland to their previous achievements.

x
Suggested Searches:
Tyson Fury
Manchester United
Marcus Rashford
Lewis Hamilton
F1
Air Jordan
More
football
With Nine Teams In The Frame, Could This Be The Most Exciting...
Just four points separate second from seventh in the Premier League table, while leaders Manchester [ ... ]
football
'Big Fish' James Rodriguez Is Exactly Where He Needs To Be At...
James Rodriguez’s career so far has been a great big ‘what if’. Whereas some footballers [ ... ]
sports
''Hold My Beer'' - How Surfer Mikey Wright Leapt Into Action...
“Hold my beer” bellowed Mikey Wright as he tore off his shirt and charged towards the sea. [ ... ]
us-sports
The Headbutts, Fall-Outs And Four-Day Benders That Made Dennis...
They called him The Worm. It may now be over two decades since he last played at the highest level in [ ... ]
boxing
The Skipping, Sushi And 6am Starts Behind Canelo Alvarez's Billionaire...
Saul ‘Canelo’ Alvarez is not only one of the richest sportspeople on the planet, having [ ... ]
sports
Team GB Star Lutalo Muhammad's Guide To Sleeping Like An Olympian
Practice makes perfect, and Olympic athletes spend years honing their craft in pursuit of medal glory. [ ... ]
football
How Cheung Chi Doy Flew Solo To Become Hong Kong's Only European...
Sixty years ago, on 14 January 1961, two teams walked out at Bloomfield Road for a Saturday football [ ... ]
sports
The Top Motivation Tips To Keep Your 2021 Fitness Kick On Course
We are now getting stuck right into January and the new year, and with the first proper weekend behind [ ... ]
football
Remembering Josef Bican, The Only Footballer Cristiano Ronaldo...
It is the perennial argument.. Who is the greatest ever, is it Cristiano Ronaldo or Josef Bican? Ok, [ ... ]
motorsport
Lando Norris' Stunning McLaren 570S, £1.4m Track Test Cars And...
What were you doing at the age of 21? Finishing university, taking the first steps on your career ladder, [ ... ]
darts
Gerwyn Price Would've Quit Darts For A Wales Rugby Union Cap,...
Gerwyn Price dreamed of representing the Wales national rugby team. Life, though, works in mysterious [ ... ]
football
20 Years On, Is Eriksson's England Remembered For The Successes...
It was a time of relative success and front-page scandals. The FA’s decision to appoint England’s [ ... ]
football
Beckham's MLS Move Gets More Monumental Every Year, And Messi...
“I would like to play in the United States someday, it’s always been one of my dreams... [ ... ]
football
Cheers Bud, Messi Pays Respect To The World’s Best ‘Keepers...
Budweiser continues to celebrate Lionel Messi’s record-breaking 644th goal by sending every goalkeeper [ ... ]
football
No More Begging Bowls, Teams Like Marine Should Get 100% Of...
There was an inevitability about the 5-0 away win on the pitch, but Sunday’s third-round clash [ ... ]
sports
The Good, The Bad And The Downright Ugly, What Happens When...
Cardiff City Football Club is one of the most traditional organisations of a deeply traditional sport. [ ... ]
sports
Meet Milly Pickles, The Inspiring Para-Athlete With Five Million...
With five million likes and 204,000 followers on TikTok, and a brand deal with one of the UK’s [ ... ]
boxing
The Hard Work, Long Days And Big Meals Behind Tyson Fury's Incredible...
Tyson Fury has found solace in working out, discovering it is the thing that not only keeps him in shape [ ... ]
us-sports
How Kareem Abdul-Jabbar Brought The Lakers' Incredible 33-Game...
He towered at seven feet two inches tall. The sky-hook was in full flow. Once again the Los Angeles [ ... ]
motorsport
Biker Sam Sunderland Won't Let Covid-19 Kill His Dream Of Another...
It was back in 2017 when Sam Sunderland wrote his name into the record books, becoming the first Brit [ ... ]
football
James Rodriguez's Car Haul Includes £300k Worth Of Mercs, And...
James Rodriguez is an absolute Rolls Royce of a footballer and had Everton’s midfield purring [ ... ]
football
Heroes V Minnows, Legends V The Lowly, The FA Cup Third Round...
The magic of the FA Cup has been slowly dying, they say. There are the scattered fixtures and irritating [ ... ]
sports
The Diet Plans To Suit All Shapes And Sizes, From 5/2 To Fasting...
The New Year’s festivities have been and gone, and Christmas is a distant memory, at least until [ ... ]
motorsport
The Major Milestones Behind Lewis Hamilton's Relentless March...
Lewis Hamilton. His name is Lewis Hamilton. And there’s a million things he’s done. But [ ... ]
us-sports
11 NBA Titles And A 70% Win Rate, Phil Jackson Is The Best Coach...
There is simply no other who can touch him. He taught Jordan, Kobe, Shaq, Fisher, Pippen, Rodman. He [ ... ]
football
Big-Game Belief Proves City Are The Real Deal And United Are...
Manchester City are going to Wembley again. Manchester United are fielding questions about their readiness [ ... ]
boxing
Anthony Joshua Is The Selfless Sports Star We All Need In Our...
We need sport more than ever right now. We need it to distract, to entertain, to lift our mood and help [ ... ]
football
Thirst, Dedication, Craft, Bravery, Words That Define The Genius...
Even Gianluigi Buffon and Jan Oblak couldn’t stop Lionel Messi, but they got a little something [ ... ]
football
Long Live Le King! Why Bruno Fernandes Is Manchester United's...
Manchester United are flying. Ole Gunnar Solskjaer’s men have transformed themselves from mid-table [ ... ]
boxing
Canelo Alvarez, The Superstar Who Makes Golf Shirts And A Panda...
What would you spend your money on if you were one of the richest sportspeople on the planet? Saul 'Canelo' [ ... ]