The story of Andy Irons is part-triumph, part-tragedy. A tortured soul, who spent the majority of his life battling the demons of bipolar disorder and drug addiction, he still managed to become world champion three times and gave the state of Hawaii a hero to be proud of. He also changed the sport of surfing forever.

Growing up in Kauai, he and younger brother Bruce took to the water from a young age. Andy got his first surfboard for Christmas at the age of six, and when their father moved to a house less than 100 yards from the beach following his divorce from their mother, the youngsters needed no second invitation to head out surfing whenever they liked.

But Bruce knew from a young age that Andy had a more complicated existence, as he explains in the outstanding Amazon Prime documentary ‘Kissed By God’, which tells the story of Andy’s life. “He had a lot of things going on in his mind, good and bad,” Bruce explains. “My brother was unorthodox, wild. You never knew what you were going to get.”

Andy was assigned a special education teacher at high school, where his manic behaviour would often be a cause for concern. With an inability to rationalise his thoughts and actions, Andy would tell friends and family “I’m just stupid, I can’t learn,” but out in the ocean he found a release. “Me and my brother would just surf, surf, surf, and I think that’s where we blocked out what was going on at home,” says Bruce. 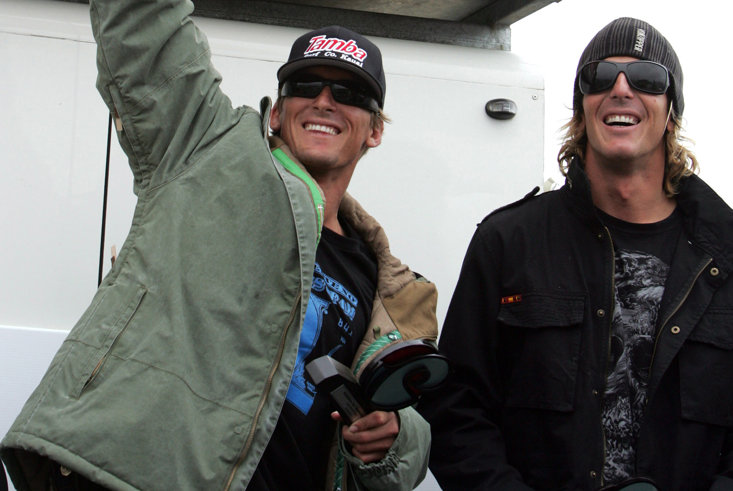 As a teenager, Andy spent much of his time trying to emulate moves he’d seen a young Kelly Slater perform in the film ‘Kelly Slater in Black and White’, and before long his prowess would see him offered lucrative contracts by surf sponsors.

Soon he won promotion to the World Championship Tour, as one of the top 32 surfers on the planet, and found himself competing against his idol Slater. Yet there would be pitfalls along the way, and Andy quickly went off the rails. After being diagnosed as bipolar, he dropped off the tour for a while.

Life changed for Andy on his 21st birthday in 1999 as he celebrated on a boat in Indonesia. After sniffing a line of morphine he had mistaken for cocaine, friends left him to sleep off his excesses before realising he was lifeless. By the time they had managed to get him to the hospital, Andy’s lung had collapsed. He was placed in intensive care, where he flatlined for a full eight minutes.

After recovering, surfing once more became his salvation.

“Usually once I get in the water and come back out I feel better no matter what’s going on,” he explains in interview footage during the Amazon documentary. “It’s almost like therapy or something. Surfing has been there for me through good, bad, parents getting divorced… it don’t matter, brother being a prick… it don’t matter. When you go surfing and do a good turn, it feels as good as your first turn.”

Back in the ocean, he immediately went about making his mark. After getting back on the World Tour, his confidence was surging. By 2002 he had claimed his first World Championship, barely three years after spending eight minutes on his deathbed.

One year on came the battle which would change the sport of surfing. Irons and Slater would share centre stage throughout the calendar, with the lead in the championship going this way and that between the pair. Slater was a six-time champion but had a new foe. “Up until 2002, he wasn’t the guy to beat,” Slater says of Irons. “But in 2003 there was no one else in the picture." 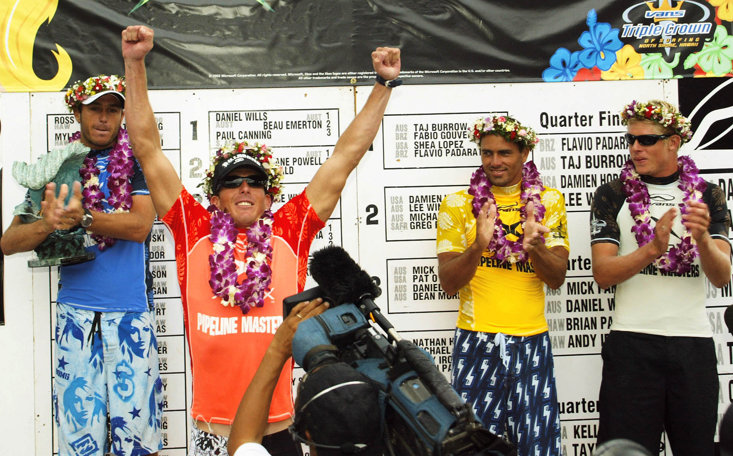 Irons won the final heat to clinch the world title in a result that altered surfing forever. His wild-child persona gave the sport a new icon, while Slater took the opportunity to go back to the drawing board and become even better, raising the bar further. Irons would win the crown again the following year, for a three-peat success which has not been matched since. But it would also be his last world title.

After being pipped to the title in 2005 following a controversial judging decision on Slater’s last ride, the pressure began to really show on Irons. His wife, Lyndie, said he watched the final heat on repeat around 1000 times and admits she believes the episode to have broken him.

He began partying to even greater excess than before, and stopped surfing almost completely as a result. Searching for normality through excess once more, opioid addiction followed.

“All I did was beg him to surf, because I thought that surfing would make him happy, but it was far more than surfing that was torturing him mentally,” explains Lyndie.

While he won countless events high on various drugs, it was the beginning of the end of his surfing career. His sponsors sent him to rehab in a bid to help straighten him out, but he would soon be back in a deeply troubled state. There were times he couldn’t even paddle, doubting absolutely everything about his technique, his troubled mind, his entire life.

A temporary relocation to Australia for a year and impending fatherhood helped him to refocus, with another surfing event success before retirement his major goal. He did get another event victory under his belt but by the end of 2010, at the age of 32, Andy Irons would be dead. 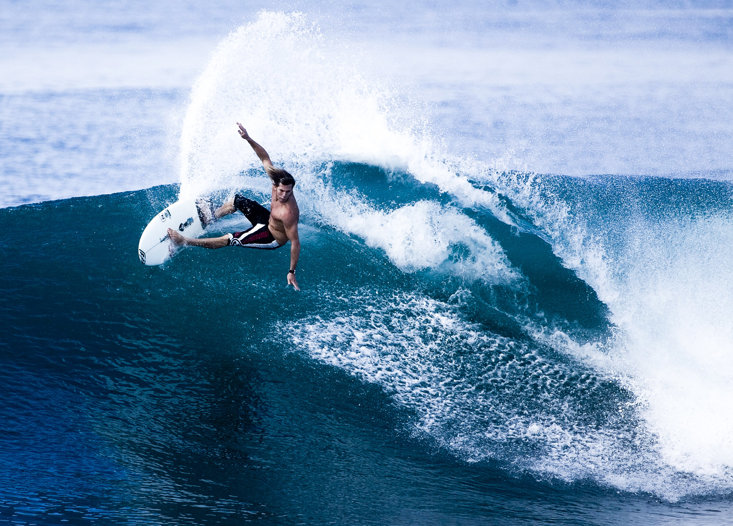 After falling ill on a flight back from an event in Puerto Rico, Andy was checked in to a Dallas airport hotel rather than being placed on his connecting flight heading for Kauai. He didn’t make it through the night. A post-mortem found that he’d had a heart attack, with acute mixed drug ingestion also cited for his sudden passing. At the time of his death, Lyndie was eight months pregnant with the couple’s first child. He left her - and, through her, his son Axel - with an enormous sense of pride. Kelly Slater too.

“A year and a half before he died, he told me he was making a documentary about the changes and lessons in his life, and he wanted to help any kids that had ever looked up to him and struggled in their lives, because he now knew what was possible,” Slater wrote for The Inertia in 2011. “He was so clear and happy and confident and positive. We had our first and only real one-on-one, heart-to-heart talk. I actually welled up with tears for how proud I was of him.”

There is a lot to take from Andy Irons’ later years, but for the larger part of his life he proved to be an icon for many people struggling with addiction and mental health troubles.

He spent his entire life wanting to feel normal, feel like a success, and for three amazing years he had crushed the overwhelming odds dealt to him by his inner demons to become the undisputed king of surfing.

More
football
Celebrating Arsenal's Invincibles With The Stats That Tell The...
There’s Sergio Agüero winning it in Fergie time. Liverpool finally ending 30 years of hurt [ ... ]
sports
Scott McTominay Lost A Contact Lens, This Lot Played On After...
Manchester United’s McTominay played first half at PSG ‘with only one eye’. So screamed [ ... ]
cycling
800m Viewers, 2037 Miles, 1 Female Finisher: The Numbers Behind...
The Giro d’Italia, the second child of the cycling world. A lifetime spent in the shadow of the [ ... ]
football
Rap, Rock And Remembering Total Football - Welcome To Johan...
“Johan Cruyff was an innovator and this play will also break with the convention of musical,” [ ... ]
esports
Introducing Guild, David Beckham's Brand New £40M Esports Franchise
There’s nothing David Beckham can’t sell. Old ‘Golden Balls’ is the most marketable [ ... ]
rugby
After 7-Month Break Nobody Wanted, How Will The 6 Nations Work...
After seven long months, the Six Nations Championship gets back underway this week in a very different [ ... ]
motorsport
How Lauda's 140mph Fireball Crash Marked The End Of The Age...
There are few worse moments to lose control than when driving at 140 miles per hour. The events on just [ ... ]
rugby
Bow Ties, Monocles And Skin-Tight World Champs - The Evolution...
When the worlds of sport and style unite, rarely is anything so satisfying as when the athlete’s [ ... ]
us-sports
Celebrating Jim Brown - The NFL Movie Giant Who OJ Robbed Of...
Before OJ there was the OG. The Original Gangster. In fact he was front and centre of an action-packed [ ... ]
tennis
Is It Time To Change Australia's Margaret Court Arena To Honour...
“My vote goes to Evonne Goolagong. “Evonne is the embodiment of what a role model or hero [ ... ]
rugby
Scotland Stun France, England Win Triple Crown - Previously...
Sons of Anarchy, This Is Us, Lost, all top notch TV drama but what else do they have in common? Two [ ... ]
sports
Power Of The Nap, The Sleeping Technique Loved By Legends LeBron,...
LeBron James does it for three hours every single day. Andrea Pirlo did it on the afternoon of the World [ ... ]
rugby
Like Surviving A Car Crash 50 Times A Game - Rugby Is Becoming...
A car crash at 40mph will produce forces of around 40 G’s. The highest G force ever recorded on [ ... ]
football
Altitude Over Attitude - Why Even Messi Struggles With His Head...
In South America, away games are a daunting prospect. Long journeys, hostile crowds, bad pitches and [ ... ]
sports
Ronaldo, Djokovic, Zlatan And More - The Covid Cases That Have...
When even the fittest and finest sports stars around the world are returning positive Covid-19 tests, [ ... ]
football
Mendy's Epic Journey: From Signing On To Keeping £71m Kepa On...
It’s July 2014 and Edouard Mendy has nothing going for him. He’s just suffered back-to-back [ ... ]
boxing
Boxing Gloves To Glitterball, Pioneering Nicola Adams Is Perfect...
It’s incredible what you can do if you put your mind to it. Take Nicola Adams for example, who [ ... ]
winter-sports
One Of Sport's Greatest Underdog Stories - How Team GB Came...
In the five Olympics since skeleton was reintroduced to the Games, Great Britain have won three gold, [ ... ]
football
Dancing, Dissent, And Free Drugs - Netflix’s Maradona In Mexico...
“It’s like taking a diabetic to a candy store,” says one fan on a radio phone-in programme [ ... ]
sports
Meet 'The Shark Whisperer' Who's Caressed A Two-Tonne, 20ft-Long...
Like most people in life, Ocean Ramsey has a role model she looks up to and takes inspiration from. [ ... ]
sports
Maradona, McEnroe And Mayhem - Liam Gallagher's Maddest Moments...
Liam Gallagher is the Cristiano Ronaldo of Rock ‘n’ Roll. Definitely? Well, Maybe. The former [ ... ]
rugby
''Stop Faking It'' - How A Fan's Inspirational Words Got Mose...
Inspiration can come from the unlikeliest of sources. For Hull KR’s Mose Masoe, lying in a hospital [ ... ]
boxing
From Gangsters To Guy Ritchie Flicks, Welcome To Britain's Oldest...
Here’s a question. What links the Kray twins, Colin Farrell, Vinnie Jones and Take That? It just [ ... ]
boxing
Tommy Fury Talks Tyson, Love Island And How He Plans To Become...
“I’ve not achieved anything. That’s genuinely how I feel.” 3.3 million Instagram [ ... ]
us-sports
Efe Obada Survived Human Trafficking And London Gangs, Now He's...
It has been a tough year for Efe Obada. But then, for a man who has been a victim of human trafficking, [ ... ]
swimming
Recalling Eric The Eel's Rise From Crocodile-Infested Waters...
Eric ‘The Eel’ Moussambani prepared himself, waiting to dive into the gigantic pool that [ ... ]
football
How Mark Crossley's Mental Health Initiative Has Got Ex-Footballers...
Liverpool manager Jurgen Klopp knows the importance of a good walk. When he was earning his bachelors [ ... ]
us-sports
The $6m Decision And 9.9m Laughs - The Numbers That Made 'King'...
Superhuman basketball savant LeBron James could be just one game away from finally settling the tired [ ... ]
rugby
Depression, James Haskell And A Poo Story, It's The Joe Marler...
On the pitch, Joe Marler’s bravery has never been in doubt. The Harlequins, Lions and England [ ... ]
boxing
Bare-Knuckles, Blades And Broughton: The Evolution Of The Boxing...
From oxhide to metal, hemp rope to horse hair, it’s fair to say those shiny, top-of-the-line gloves [ ... ]