Football
Features
Cole is one of the finest players this country has ever produced
Simon Lillicrap
08:05, 06 Oct 2021

Ashley Cole was an Arsenal legend in the making. An academy starlet, he rose through the ranks and established himself as one of the finest young players on the planet. He won three FA Cups and two Premier League titles at Highbury, including being part of that incredible Invincibles team that went the entire season unbeaten in 2003/04.

With Patrick Vieira stating he thought Cole could be the next Tony Adams, the boyhood Gunners fan looked set to assert himself as an Arsenal legend during his peak. Then things all went wrong from Arsene Wenger’s perspective.

If Sol Campbell’s move from Tottenham Hotspur to Arsenal is without a doubt the most controversial move in Premier League history, Cole’s transfer saga that saw him join Chelsea is not far behind. The bitterness that ensued between him, the fans and the club left wounds that have still not healed, yet Cole managed to overcome all of this to be the Premier League’s greatest ever left-back.

In January 2005, Jose Mourinho already had his sights set on the Arsenal man, leading to an illegal meeting which would result in both parties being fined. Although Cole signed a one-year contract extension, he would eventually join Chelsea in the summer of 2006, after a feud-ridden season with his boyhood club.

If Arsenal fans were already miffed, Cole’s autobiography left them raging. Amongst other revelations, he wrote how he "nearly swerved off the road" when he learned of Arsenal's contract offer of £55,000-a-week, while Chelsea were reportedly offering a weekly wage of £90,000.

Jibes of ‘Cashley’ followed from those in red as this young talented black player was painted a ‘money-grabber’ by the British press, but looking back with more knowledge of what was to come, it is easy to see things from another perspective. Arsenal, from a position of relative strength, looked as if they had tried to lowball an academy prospect who they thought would stay at the club forever. He was the best left-back in the world and deserved to be paid accordingly, even if £55k a week was inconceivable to turn down for the man on the street. 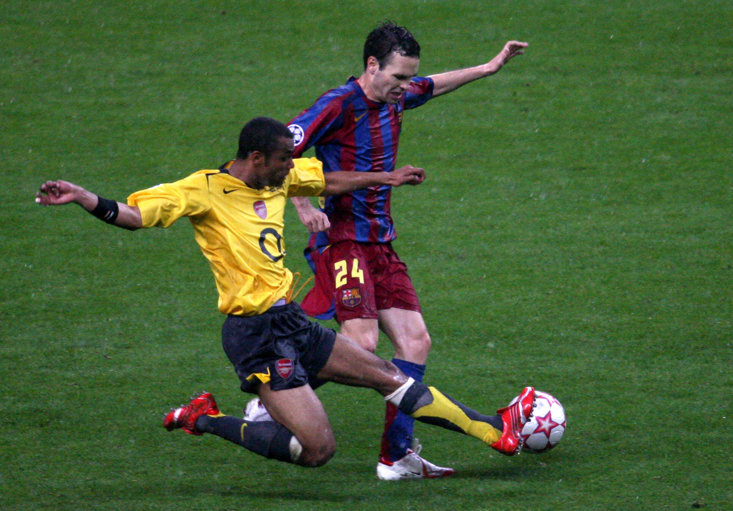 Despite this media backlash, Cole continued to perform on the pitch at the very highest level. Until Raheem Sterling spoke out about the criticism targeted at him by the tabloid newspapers, black footballers were faced with unfair scrutiny over the money they earned. With a celebrity wife, Cole was constantly in the tabloids, yet his performances on the pitch did not waver.

He shut out Cristiano Ronaldo at Euro 2004 and World Cup 2006 with huge professionalism but as part of England’s ‘golden generation’ failed to secure any silverware. Arguably though, he was the only member of that England side who was the best in the world in his position, and performed as well for his country as he did for his club, which speaks volumes about his talent and dedication.

After his move to Chelsea, he continued to win the big trophies as an integral part of the team. Winning seven FA Cups is no fluke and that record-breaking figure is unlikely to ever be challenged, given his utter dominance of the world’s most historic cup competition.

Having lost the 2006 Champions League final with Arsenal, he would get his hands on the European Cup six years later as he was yet again an immovable object as Chelsea shocked the continent. He was one of several senior players rejuvenated by Roberto di Matteo’s arrival and was part of a defence that got past that great Barcelona side in the semi-finals and then beat Bayern Munich against the odds in the final. One year later he won the Europa League to complete his club collection.

Ashley Cole was a controversial character in his younger days. His move from Arsenal to Chelsea left a bad taste in the mouth for several fans struggling to come to terms with the finances involved in the modern game. But what cannot be denied is he is one of the finest left-backs the world has ever seen.

He’s certainly the best left-back England have ever produced.