On June 28, 1997, Mike Tyson and Evander Holyfield shared arguably the most infamous night in boxing’s long and storied history. It was meant to be Tyson’s opportunity to right the wrongs of his defeat to Holyfield a year earlier, when he was stopped in the eleventh round, but instead it turned into a literal bloodbath.

When Tyson took a bite from Holyfield’s right ear, he shocked the world, cemented his place as boxing’s undisputed antagonist and left a bloody stain on the world of prizefighting. The Ring Magazine, boxing’s bible, ranked ‘Bite Night’ as the second dirtiest boxing match of all-time in 1997, which begs the question - if a fight where one combatant left the ring with a body part missing, the victim of actual cannibalism, was number two, what the hell was the dirtiest fight ever? 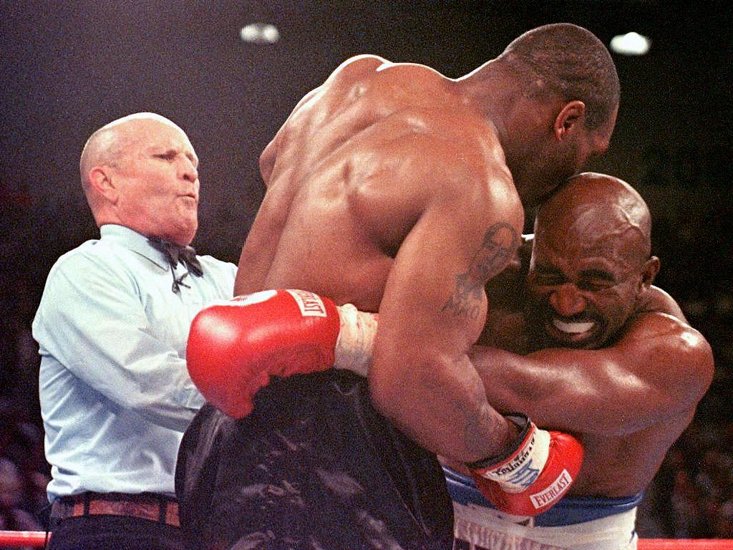 That dishonour fell to the June 1983 clash between Billy Collins Jr and Luis Resto. Going into this bout at Madison Square Garden, on the undercard of Roberto Duran’s light-middleweight title fight with Davey Moore, Collins Jr was one of the sport’s rising stars and, still undefeated, was the heavy betting favourite against Resto, a supposedly light punching journeyman from Puerto Rico.

Ten rounds of boxing later, Collins had been beaten hopelessly, his face morphing into a Joseph Merrick-esque mess. He would never lace up a pair of gloves professionally again and a year later he would be dead.

In the ring, Resto beat Collins black and blue for over half an hour. In between rounds, Collins would remark to his father and trainer, Billy Collins Sr., that “it felt like [Resto] was hitting me with a brick.”

There was nothing natural about Resto’s newly-discovered concussive power, and it wasn’t just what he was filling his gloves with (plaster of Paris) that caused so much damage, but also what he was taking out of it, namely the padding. The decision to alter each glove came from Resto’s trainer and one of boxing’s most nefarious figures, a man named Panama Lewis.

Lewis, once a highly-regarded trainer who was compared with such legends as Emanuel Steward and Lou Duva, fell from grace in the early 80s when he was shown, on live TV, giving his fighter Aaron Pryor, who was fighting and subsequently stopped Alexis Arguello, a bottle of water mixed with stimulants. He was even captured saying to his charge: “Not that bottle, the one I mixed.” Though his reputation was sullied, Lewis was never sanctioned and now he was utilising other illegal methods to gain victory for another of his fighters. This time the consequences would be much more deadly.

Boxing Battles
@BoxingBattles
#OTD 37 years ago, Aaron Pryor knocks out Alexis Arguello in round 14 after Pryors trainer, Panama Lewis, secretly gives him performance enhancing substances in the corner - leading to the fight going down as one of the most dramatic and controversial in the sports history.
15
36

After the fight’s conclusion, Collins Sr. went to shake hands with his son’s conqueror, immediately feeling that there was something wrong with his gloves. Turning to officials, he shouted: “Hey! All of the padding is out… it’s all out! Commissioner, commissioner…there’s no damn padding.”

The cat was out of the bag for Lewis and Resto and when the New York State Commission stepped in and investigated the incident, they found the padding was indeed missing from Resto’s gloves. Lewis’s boxing license was revoked, effectively banning him from any role in American boxing forever. Resto was suspended indefinitely and never fought again.

The real victim here was Collins, though. After the fight his vision was damaged permanently thanks to a torn iris and he too would never fight again, his promising career in pugilism prematurely ended by an act of cowardice from a man who should have known better and an accomplice that needn’t have taken part.

After the fight, unable to box anymore, Collins spiralled into depression, drank more, and increasingly violent mood swings threatened to break up his marriage with his then pregnant wife. In 1984, Collins Jr. was killed in a car accident when he hit a culvert near his home in Antioch, Tennessee. His family and many commentators believe it was suicide and would not have happened had he not suffered the loss of his livelihood, which ultimately broke him down both emotionally and physically.

Two years later, in 1986, Panama Lewis and Luis Resto were tried and convicted of assault, conspiracy, and criminal possession of a deadly weapon (Resto's plaster of Paris wraps). Both served two and a half years in prison.  Despite denying all knowledge of any wrongdoing for over quarter of a century, Resto finally apologised for his crimes to Collins’ widow in 2007 in an HBO documentary called Assault In The Ring. Incredibly, Resto claimed the same thing had been done to his gloves in at least two more of his previous fights.

Thankfully, Collins’ last fight was ruled a ‘No Contest’ leaving the late fighter with a perfect record of 14-0. Sadly, we’ll never know what could have been for this incredible talent.