Football
Features
It is nine years since Babel became the first player fined by the FA for conduct online
Matthew Crist
06:55, 17 Jan 2020

On January 17th 2011, Liverpool winger Ryan Babel created a little piece of history by becoming the first professional footballer ever to be censured by the Football Association for comments made on Twitter.

The FA fined the Dutch international £10,000 for posting a mocked-up picture of referee Howard Webb wearing a Manchester United shirt along with the words: “And they call him one of the best referees? That’s a joke,” following Liverpool’s 1-0 defeat at Old Trafford in the FA Cup third round.

Whereas at one time the nearest someone could get to gauging a player’s mood was if they ran into them in the pub or at a petrol station, the digital age has broken the barrier between supporters and superstars.

But Babel’s online rant wasn’t the first and was far from the last when it comes to footballers getting into hot water for making their feelings plain on social media, with a raft of big names often finding the temptation of a global outlet for their frustrations too much to resist.

And since that seemingly harmless jibe at Howard Webb back in 2011, the FA has taken in more than £350,000 in fines to players and officials for posts they have deemed to be offensive, controversial or just downright wrong. And clubs have dished out their own punishments, from fines to bans and even sackings.

So here is a look at some of the most criticised, not to mention costly, social media outbursts from down the years which have had players from around the world desperately hitting the delete button.

Just 12 months after Ryan Babel felt the full force of the law for his social media meltdown, Ashley Cole was fined £90,000 for using an expletive on Twitter to describe the Football Association following the John Terry racism case in 2012.

Responding to the FA's judgement in the case which saw the Chelsea defender found guilty of racially insulting Anton Ferdinand during a match between Chelsea and QPR, Cole tweeted: "Hahahahaa, well done #fa I lied did I, #BUNCHOFT***S" He quickly deleted the tweet and issued an unreserved apology for the message, which was retweeted more than 19,000 times.

It was the largest fine ever given out by the FA in relation to social media but Cole escaped a ban after personally apologising to FA chairman David Bernstein. 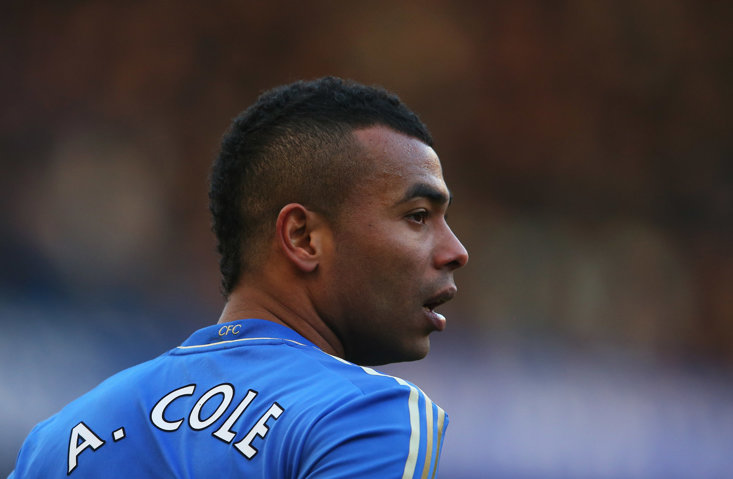 Some three years prior to Ryan Babel’s Photoshop faux pas, and seemingly frustrated with how long it was taking to complete his move to Sunderland, Darren Bent sent a foul-mouthed message to the Tottenham chairman Daniel Levy via Twitter.

Taking to the social media platform to make his feelings clear, the striker wrote: "Do I wanna go Hull City NO. Do I wanna go Stoke NO do I wanna go Sunderland YES so stop f****** around, Levy. Sunderland are not the problem in the slightest."

Bent later claimed: "I allowed my emotions to get in the way of my better judgment. I regret my actions and did not intend to offend Daniel Levy or anyone with the nature or the content of my posting," and finally got his “dream” move in 2009 but not before being issued with an £80,000 fine from the club for his outburst.

The career of Romanian striker Adrian Mutu had plenty of ups and downs, as his talent on the pitch was often counteracted by controversy off it, most notably when his Chelsea career ended in 2004 after he was sacked for cocaine use and banned for seven months.

But it was an angry Facebook post which all but brought the curtain down on what had been a pretty impressive international career too when, following Romania’s failure to qualify for the 2014 World Cup, Mutu posted a picture to Facebook of national coach Victor Piţurcă with Mr Bean’s face Photoshopped in.

His bosses didn’t see the funny side, and the response from the powers that be in Romania was as harsh as it was swift, with Mutu being banned from ever representing Romania again; meaning he never added to his 77 international caps and ended his playing days just one goal short of Gheorghe Hagi’s record haul of 35. 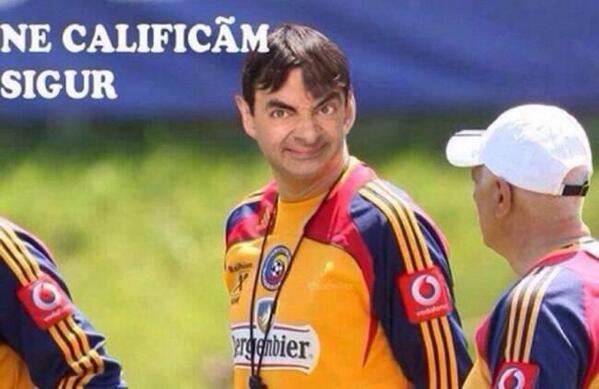 An ill-advised immigration joke about Ghana fans at Wembley from West Ham striker Carlton Cole didn’t just go down like a lead balloon, but what he thought were harmless comments would ultimately see him landed with a £20,000 fine from the Football Association.

Cole posted several comments during England's 1-1 draw with Ghana in 2011 including: “Immigration has surrounded the Wembley premises! I knew it was a trap! Hahahaha.' Followed by: “The only way to get out safely is to wear an England jersey and paint your face with the St. George's' flag!”

Realising that his comments were causing offence, Cole tweeted: “To my Ghanaian brothers don’t take it so seriously, it’s just jokes! You’ve played well! Done Africa proud!” While responding to complaints from fellow Twitter users, he then posted: “Why are there so many sensitive people out there! It was a joke & it’s not even racist!”

Within hours of signing for Barcelona’s reserve team in 2015, forward Sergi Guardiola was sacked by the club after officials were alerted to "offensive tweets" he had posted two years previously about Barca and Catalonia.

The 24-year old, and no relation to Pep, had joined Barcelona B on the morning but his contract was terminated just a few hours later when they became aware of pro-Real Madrid tweets dating back to 2013, including offensive language about Catalans.

The tweets included several uses of the "Hala Madrid" rallying cry favoured by fans of Barcelona's eternal rivals Real Madrid, and if that sat uncomfortably with some Barca supporters, Guardiola's "f*** Catalonia" comment all but cemented his early departure from Camp Nou.

🇧🇪
@AydanAzzar
And it's official. Barcelona have terminated the contract of Sergi Guardiola. 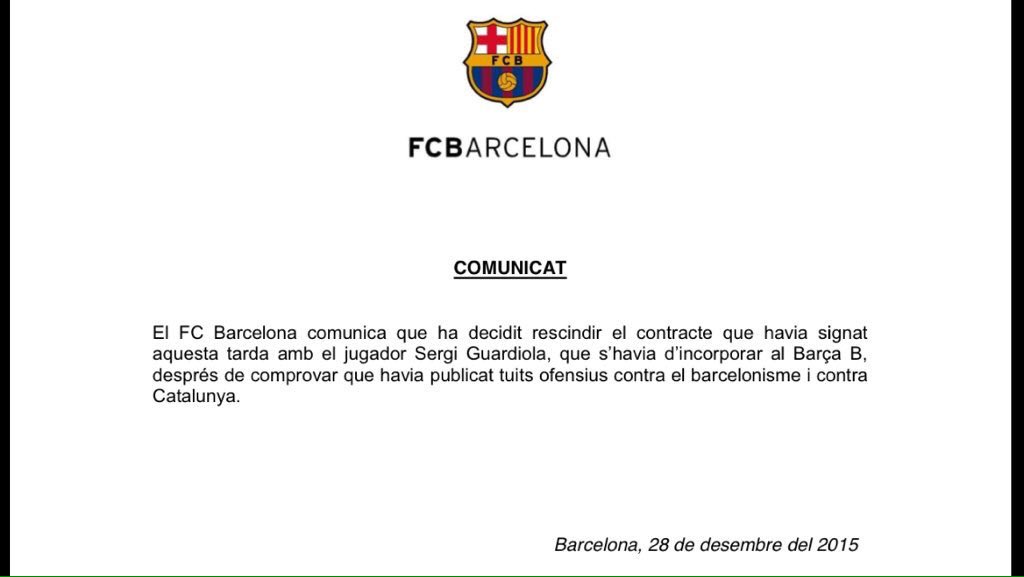 97
47
x
Suggested Searches:
Manchester United
Liverpool
Manchester City
Marcus Rashford
Premier League
More
football
Wor Jackie! Remembering The Toon's First Iconic Number Nine...
St. James’ Park is one of the biggest football stadiums in England. The home of Newcastle United [ ... ]
boxing
Hypnotists, USB Sticks And A Megaphone: When Boxers Bring Out...
The winners and losers in boxing aren’t always decided in the ring by whomever has the most superior [ ... ]
us-sports
Chuck Daly: 'Daddy Rich' Tamed Rodman, Bagged Isiah His Rings...
Entering a debate on the greatest sports sides in history should inevitably reach a particular conclusion. Avoiding [ ... ]
boxing
Heroin, The Mob And A Left Jab From Hell: The Tragic Tale Of...
“One day they’re going to write a blues song about fighters. It'll just be for slow [ ... ]
golf
That Shot From The Car Park: How British Fans Fell In Love With...
On the tenth anniversary of his death, we remember how the British fell in love with the great Seve [ ... ]
us-sports
Remembering Mr Sunshine And The 2529 Games That Ernie Banks...
May 8 1973: sports history is made. Stepping out into the arena of Candlestick Park, in Bayview Heights [ ... ]
athletics
On This Day In 1954, Roger Bannister Broke The Four-Minute Mile
On this day in 1954, Roger Bannister made history. He became the first man to run a mile in under four [ ... ]
football
On This Day In 1928, Everton Legend Dixie Dean Scored His 60th...
Dixie Dean was officially the world’s first football number 9 and a true goalscoring legend. On [ ... ]
us-sports
The Crazy Times Of Kareem Abdul-Jabbar, The NBA All-Star Who...
This article first appeared in The Sportsman on 05/05/20 Being the number one draft pick in the NBA [ ... ]
football
The '49 Grande Torino Serie A Champions And The Flight That...
The dates of the demise of the greatest football sides can vary. To pinpoint exactly the end of a particularly [ ... ]
boxing
From Wrestlers To An Actual Bear, These Are Five Of The Most...
The battle between boxing’s self-proclaimed TBE (The Best Ever) and YouTuber Logan Paul is officially [ ... ]
football
The Day Leicester City's 5000/1 Premier League Fairy Tale Became...
The odds were 5000 to one. It wasn’t written in the Premier League script. The manager in charge [ ... ]
motorsport
NASCAR's Dale 'The Intimidator' Earnhardt: Fast And Furious...
He was the driver known as The Intimidator. A three-time married high-school drop-out who became the [ ... ]
boxing
Rocky Marciano - The Epitome Of The American Dream And An Era...
With the Great Depression and Second World War firmly in its rear-view mirror, the 1950s saw the United [ ... ]
football
Gone In 70 Seconds: The Day Deontay Wilder Obliterated Audley...
“I’m a beast with God-given talent,” boasted Deontay Wilder inside the ring at [ ... ]
boxing
A Prince, Prime Minister, Dickens And The Fight That Changed...
The article first appeared in The Sportsman on 25/04/20 It was a fight that attracted the interest of [ ... ]
motorsport
The Tragedy Of Alberto Ascari, The Only Italian F1 Driver To...
The article first appeared in The Sportsman on 13/07/20 Alberto Ascari was just seven years old [ ... ]
boxing
The Night George Foreman Beat Five Men In An Hour In Front Of...
On March 26, 1974, George Foreman obliterated fellow heavyweight Ken Norton inside two rounds in the [ ... ]
football
Speaking The Same Language As Carlo And Jose - The Life Of A...
This article first appeared in The Sportsman on 25/03/20 “What do you do in the bedroom?” [ ... ]
boxing
The Forgotten English Boxing Champion From Whitechapel Who Conquered...
When arguing over a pint about who the greatest fighter was to ever hail from the rain-soaked shores [ ... ]
boxing
Boxer-Turned-Promoter Dmitriy Salita On His Incredible Journey...
Each week, The Sportsman sits down with a stellar name from the boxing world to discuss the defining [ ... ]
snooker
VR Mishaps, Pig Farms And American Hustles: When Ronnie O’Sullivan...
As Ronnie O'Sullivan is currently looking to defend his Betfred World Snooker Championship [ ... ]
football
Arsene Wenger, The Maverick Manager Who Changed The English...
Twenty-two and a half years, 1218 matches, three league titles, and an unparalleled seven FA Cups: on [ ... ]
boxing
On This Day: When Joe Calzaghe Made Bernard Hopkins Eat His...
Growing up as a fan of all things British boxing, few moments can compare to listening to 14,000 fervent [ ... ]
boxing
Outside The Ropes: Natasha Jonas - The Olympian, The Fighter...
The Sportsman delves deeper into the world of professional boxing to uncover the stories away from the [ ... ]
golf
Lazarus With A Five Iron: Tiger Roars Back At The Masters On...
On April 14 2019, the weather was looming ominously in Augusta, Georgia. The only thunder that ultimately [ ... ]
football
Ryan Giggs And The Greatest Goal In FA Cup History
Across his 24 seasons and over 900 appearances as a mainstay of the Manchester United squad, Ryan Giggs [ ... ]
boxing
The Suzie Q To The Hammer, Five Signature Punches That Changed...
The art of punching has moved on leaps and bounds since John L Sullivan won the first heavyweight title [ ... ]
football
Frank Warren On Being Shot, Benn v McClellan And Retirement...
Legendary boxing promoter Frank Warren will take centre stage this weekend as his documentary ‘Make [ ... ]
football
The Big Interview: Jamie Carragher On England Regret, Liverpool...
The Sportsman were lucky enough to sit down for a lengthy chat with former England international, Liverpool [ ... ]