Rugby
Features
'Most boys go their whole career without a whack in the knackers'
John Davidson
12:05, 20 Aug 2019

Warrington forward Jack Hughes will not let a ruptured testicle stop him from playing in the Challenge Cup final this Saturday at Wembley Stadium.

The Wolves will take on St Helens in rugby league’s showpiece event and Hughes is backing himself to be fit to play, despite suffering the gruesome injury just 17 days ago.

The second-rower took a knock to the genitals in the first half a match against Catalans Dragons in Perpignan on August 3. Amazingly, Hughes played on for 50 minutes more before being sent to hospital.

“Catalans had scored a try and, from the restart, I got tackled, copped a knee to my groin and fell straight to the ground,” he explained.

“That initial five minutes of pain is something I wouldn’t wish on my worst enemy. It gradually started to ease up but then in the second half I could feel the swelling between my legs. It was pretty nasty, so I thought, in the end, I better get myself off and checked out.”

Hughes went into surgery immediately in France to repair his damaged gonad.

“I got straight in there, got the ultrasound and within a couple of hours I was going into surgery,” he said.

“The surgeon explained that I had ruptured a third of my testicle, that there was a small chance of me losing it and what life would be like afterwards.

“Gladly, he did a good job and I’ve still got the two [testicles] intact. It’s a pretty rare injury, most boys go their whole career without a whack in the knackers. It’s kind of one of these freak things. Hopefully, I’ll never cop one of those again.

“I had the stitches out last week, which was pretty painful but hopefully that’s the end of it now. I’ve felt a lot better since they’ve been removed.” 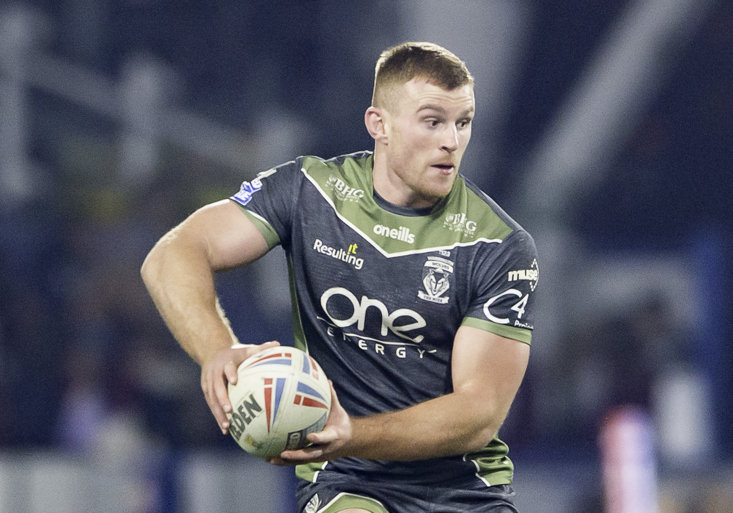 The 27-year-old has unsurprisingly not played another game since picking up the painful injury. But Hughes is in line to play in his third Challenge Cup final this weekend. He will train this week and will wear a genital protector to take the field in London.

“I had a little run at the weekend, and I’m feeling good,” Hughes maintained. “I’ve been looking at something similar to the boxes that the cricket boys wear and then putting some tight briefs over it,” he said.

“A bit more recovery time would have been ideal but I can run – no problems – and will test it out in the contact department this week. If there is a slight pain, the adrenalin takes over and, while I might be a bit uncomfortable afterwards, I suppose it’s a risk and reward because this is a Challenge Cup final.”

Hughes has unfinished business with the Challenge Cup after the Wolves were beaten in finals in 2016 and 2018 by Hull FC and Catalans. They have a huge task on their hands in Super League’s league leaders St Helens, who lost just three games all season.

“As a group, we’re hungry than ever,” the forward insisted. “Success tastes better when you’ve tasted defeat, that’s us at the minute. We’re striving for that and hopefully it’s going to taste really good for us on Saturday.”