Manny Pacquiao. One of the greatest pound-for-pound boxers of all time. Fighter of the Decade for the 00s. The only eight-division world champion in boxing history. A respected senator in his native country of the Philippines. And now, bizarrely, an advertising prop for one of the leading e-commerce platforms in Southeast Asia.

Manny Pacquiao. Boxer, politician, singer - yes, there’s an album or two! - and yet also the face of an online shopping brand.

Leading up to the mammoth Asia shopping holiday Singles Day on November 11, Pacquiao has just jumped on board to advertise Shopee, as revealed in an Instagram post on Monday:

You may recognise Shopee via their brand ambassador, a certain Cristiano Ronaldo - the Portugal and Juventus superstar demonstrating the recognisable ‘Go Shopee’ dance to the tune of ‘Baby Shark’. Mercifully Pacquiao has yet to replicate the footballer to that extent.

Here’s a few more sports stars who've flogged their image to the highest bidder for a bit more wonga, with some extremely questionable endorsements...

Float like a butterfly, sting like a bee, kill cockroaches. The Greatest promoted D-Con’s roach killer around the conclusion of his boxing career in 1980. Not quite what we expected from one of the icons of 20th Century sport.

Two footballers with a total of four World Cups to brag about here. 2002 World Cup winner Ronaldinho launched his own brand of contraceptive with Ronaldinho’s Sex-Free Condoms. That’s right: Ronaldinho’s ‘Sex-Free’ Condoms. Having sex whilst thinking of Ronaldinho? Whatever turns you on we guess.

Before that, his compatriot Pele had got in on the action by signing up to represent US firm Pfizer - the maker of Viagra.

Becks swapped advertising brands such as Pepsi and Walkers crisps for this venture into the fish finger market, whilst continuing his playing career on the west coast of the U.S in 2008. It seemed appropriate for an LA Galaxy player adorned with the representation of sponsor ‘Herbalife’ across his chest.

Beckham put himself front and centre in encouraging the GO3 range of healthy food products enriched with Omega 3 fish oils. In his photo call at Wembley Stadium he delicately balanced a stack of the fish sticks, Golden Balls apparently loving the golden crumb.

With his superb free-kicks which came to define his illustrious career, David Beckham was known for having a keen (bird’s) eye for goal. 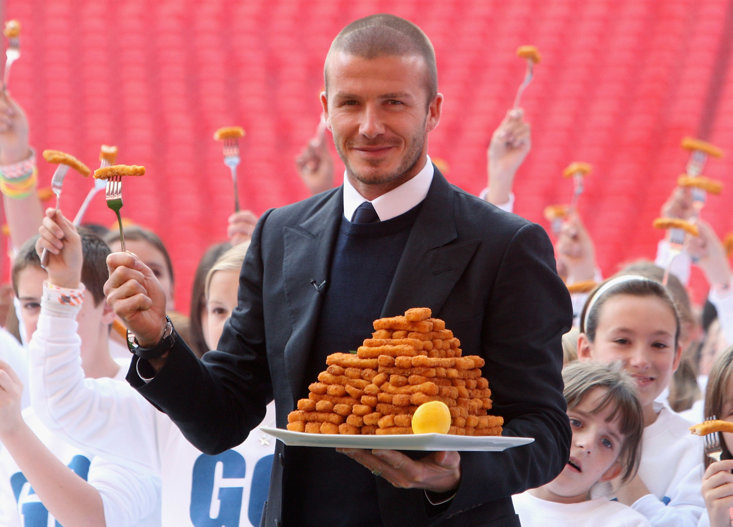 Think that it’s just a modern trend and that the game has only recently ‘gone’? Think again. Joltin’ Joe DiMaggio, one of the greatest baseball players of all time and one-time Mr. Marilyn Monroe advertised Mr. Coffee in the mid-70s.

In the time before the internet, DiMaggio arguably became more synonymous with the coffee manufacturer for a whole generation than he did for his sporting career. DiMaggio himself rarely drank coffee due to suffering from ulcers.

There’s a reason Floyd Mayweather adopted the moniker ‘Money’. Burger King reportedly paid $1 million for their mascot, the haunting face of the King, to walk out as part of Mayweather’s entourage alongside Justin Bieber when the boxer fought Manny Pacquiao.

Mayweather’s 2017 opponent, MMA fighter-turned-one-time-boxer Conor McGregor, also fronted a campaign for the fast food behemoth. The Notorious took a massive wedge and a huge chomp out of their Spicy Crispy Chicken Sandwich on a private jet in a cringe-inducing advertisement in 2018.

Typically, he signed off knowingly at his critics: "Thanks for all the trash talk guys. You just put Conor Jnr through college."