Pop quiz, hot-shot! With her astonishing longevity, Queen Elizabeth II has been around for exactly a third of the entire number of US Presidents in history. The 94-year-old monarch has also met with 10 of the 11 of them who have been sworn into office since her coronation in 1952. Who’s the odd man out? We’ll give you a bit of time to think about that.

Back in May ‘91, Liz paid one of her several state visits in her near-70 year reign across the pond, in the era of George Bush Part: I. It was the final year of the Cold War, the birth of the world wide web and, more importantly, Comedy Central, the Bulls breaking their NBA duck, and both Virgil van Djik and Emily Ratajkowski entering the world.

The late President H.W. Bush and First Lady Barbara Bush hosted the Queen and her husband Prince Philip for a State Dinner on May 14, 1991 as they arrived on a 13-day royal tour. To make things even more twee and regal, during the visit the Queen also planted a commemorative tree, a Little-Leaf Linden, on the South Lawn of the White House.

Things took a bit more of a hot-dogs, beer, and tacos turn the day after when President George Bush decided to take the Queen out to a ballgame. Upon the invitation of the then-Baltimore Orioles owner Eli S. Jacobs, an entrepreneur who would file for bankruptcy two years later, the Queen travelled the short distance of approximately 40 miles from the White House to Waverley, the impressive armoured convoy entering the old Memorial Stadium to watch the Orioles take out the Oakland A’s for a Major League Baseball game.

Her Majesty even shook hands with future Hall of Famer and 19-time All Star Cal Ripken, the short-stop who spent all 21 years of his MLB career with the Orioles. Ripken was later the subject of a famous Boy Meets World episode. Cal Meets Queen however happened in the Orioles dugout. 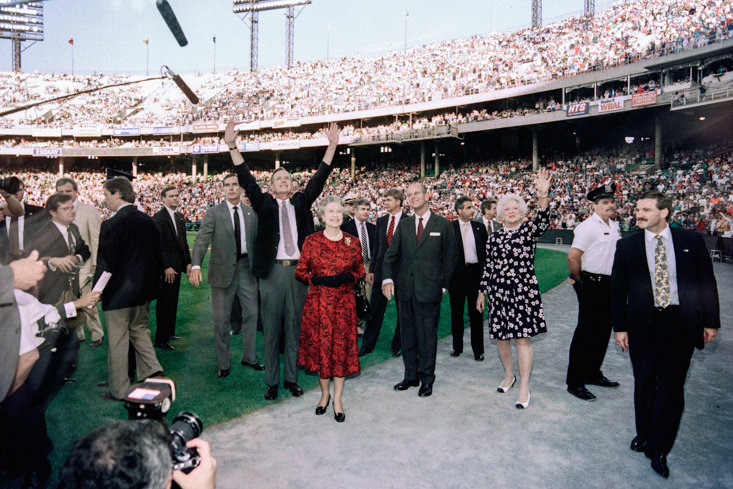 The most glaring missed opportunity would have been to see the Queen of England throw out the ceremonial first pitch, as is a notable tradition within the sport (we implore you to watch a highlights reel of the worst Presidential attempts). A day later, on May 16, the Queen became the first British monarch to address the United States Congress, but that’s far less impressive.

The sheer chalk and cheese nature of the Queen in the bleachers, demolishing pretzels and pop is a nice, hopeful - but admittedly less than likely - image. Perhaps less than thrilled, she left after two innings.

Obviously, Royals attending sports events is nothing new. Prince William and the Duchess of Cambridge have been in regular attendance at Wimbledon for many years, memorably witnessing Sir Andy Murray’s second win at the All Grass Courts in 2016, the men’s single trophy given out by Will’s relative the Duke of Kent, the Queen’s cousin. The future-king of England is also the President of the Football Association, as well as being an avid rugby fan. Brother Harry flew out to Japan to support the national side in the final of the most recent World Cup.

Of course Liz herself was famously the one to hand over the Jules Rimet trophy to Bobby Moore at Wembley ‘66, and her predecessor and dad King George VI has one of the most prestigious horse-racings events named for him. The Chase was first run in February 1937, and named in honour of the new British monarch who was due to be crowned later that year. In addition, the Queen’s father, mother, and sister attended the first Formula One World Championship event at Silverstone in 1950, the only time the reigning monarch has ever attended a British motor race. Her great-grandfather Edward VII purportedly witnessed the first (illegal) world heavyweight title fight in the company of Charles Dickens and Prime Minister Lord Palmerston.

Unfortunately, as the Queen approaches her Centennial, it’s unlikely we’ll be afforded the glorious chance to witness Her Majesty at a future Super Bowl, a League of Legends Championship, or perhaps even a return to Wembley for a National League play-off final. But there’s always hope.

Oh, and the answer was Lyndon B. Johnson.