Cricket
Features
The all-rounder returns to Cape Town on Friday, four years on from his sensational knock
Kris Voakes
07:01, 03 Jan 2020

These days he’s England’s World Cup-winning star, the new Ian Botham with his very own Headingley heroics to look back on. He’s even the reigning BBC Sports Personality of the Year.

But when Ben Stokes pulled on his whites in Cape Town on January 3, 2016 he was simply one of the cricketing ranks still looking to really make a mark in Alastair Cook’s England side.

Averaging just 27.72 in a test career which had spanned more than two years and not-yet yielded 1000 runs, the Durham all-rounder needed a spark to prove he could be his country’s go-to man in the middle order.

Stokes arrived at the crease that morning on 74 not out from 93 balls after an entertaining first day had finished with England on 317 for 5. What followed was one of the most remarkable innings in the sport’s history, with Stokes belting a breathtaking 258 in just 198 balls as he sent South Africa’s bowlers to all parts of the famous Newlands ground. In doing so, he solidified his position as English cricket’s great new hope.

Stokes got to work immediately on the second morning, bringing up his century with 26 runs off the first 12 balls he faced. From there he took it up another level, thinking nothing of pulling Kagiso Rabada over deep square-leg for six or butchering Morne Morkel over long-on for another maximum. By the time he brought up his 200 off 158 deliveries, his second century had been achieved in just 53 balls. This was cricketing brutality.

As Stokes approached 250 and partner Jonny Bairstow raced past 100, England had brought up the second-fastest score of 600 in test history. While skipper Cook was beginning to think about the tactics involved in trying to force a victory, Stokes wasn’t about to change his mindset for anything, as he later told Sky Sports: 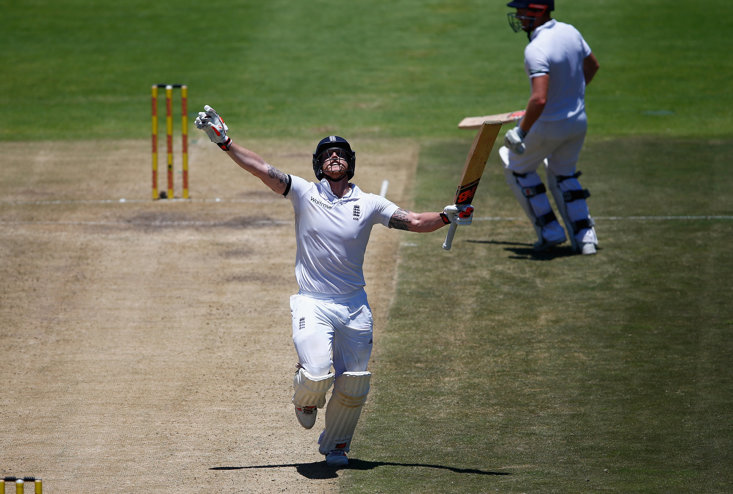 He was eventually run out for 258, having struck 11 sixes - an England test record - in one of the most destructive displays of batting ever seen on a cricket field.

He and Bairstow had added a world record 399 for the sixth wicket, and by the time Cook declared shortly after the Yorkshireman had reached 150, England had scored 312 runs for the loss of just Stokes’ wicket in only 38.5 overs on the second day.

What had felt like a highlight reel of shot-playing had in actual fact taken place in barely three hours under the South African sun. For Stokes it was a true coming-of-age moment at test level.

“I’ll probably never play like this ever again in my life while playing cricket but I’ve done it once so at least I can say that,” he told reporters afterwards. “I normally say ‘Crikey’ when I get to 30, to be honest.

“I felt a little bit of pressure coming into the game with not having too many runs under my belt in the tests before this, so there was a lot more emotion than I do normally show when I got to 100 especially.

“I just tried to keep on going and wasn’t really thinking of any landmarks or anything as I went along – I just tried to hit as many boundaries as I could because it was too hot to run!”

Cricket Viewz
@CricketViewz
JANUARY: Ben Stokes lights up Cape Town with the fastest ever 200 by an England player
6
24
Advertisement

It says a lot about Stokes as a cricketer, a competitor and a character that this was just the first of many memorable innings.

Four years on, and with England facing South Africa in Cape Town again on Friday in the Second Test, he is remembered more for the 84 not out of his side’s 2019 World Cup win and the astonishing match-winning knock of 135 not out in the Headingley Ashes test which followed soon after.

Cook, though, was quick to predict that his stunning 258 in Cape Town would only be the start.

"It was a pleasure to watch, one of those you don't ever want to end," the opener told the BBC afterwards.

"It was frighteningly good. Not many in the world have the ability to do that, so it's great that he's in our side.

"I don't think it's a one-off. I'm not saying it will happen every time he goes out to bat, but he will play innings that win matches for England."

They could do with another Stokes masterclass in Cape Town this weekend.