Football
Features
United have named at least one academy graduate in every matchday squad since 1937
Jack Porter
06:55, 18 Dec 2019

October 30th, 1937. Semi-blissful days before the outbreak of World War II, the Golden Gate Bridge had just opened, and people were just starting to think: “Where the hell is Amelia Earhart?”

It was also the date that saw Manchester United field academy graduates Tom Manley and Jackie Wassall for a First Division game against Fulham, beginning a 4000-game run which continues to this day. Who would have thought all those 82 years ago that Manchester United would remain a bastion of promoting youth products in 2019?

While United have not been shy in spending similar amounts to those splashed out elsewhere, imports have been supplemented at every turn by academy products, a model of which current manager Ole Gunnar Solskjaer remains a refreshingly strong proponent.

Here are the best players, the creme de la creme, who epitomise the greatness of Manchester United’s stunningly successful academy.

Was there any other place to start? How different Ryan Wilson’s career could have been had he elected to stay with Manchester City at the start of his footballing days, aged 14. The Cityzens possessed the young Wilson for two years, but as he would lose the surname and become Ryan Giggs at age 16, so too would City lose the man who would become the most decorated British player of all time.

Across a career spanning close to a quarter of a century and 963 games, Giggs tore players apart again and again. He also won 34 trophies including 13 Premier League titles, four FA Cups, and a brace of Champions League titles to boot. Say no more.

Scholes was possessed with seemingly otherworldly passing ability and the eye (and foot) for a good thronker. Just ask Barcelona legend Xavi.

"In the last 15 to 20 years, the best central midfielder that I have seen - the most complete - is Scholes,” said the Spaniard. “I have spoken with Xabi Alonso about this many times. Scholes is a spectacular player who has everything.

"He can play the final pass, he can score, he is strong, he never gets knocked off the ball and he doesn’t give possession away. If he had been Spanish then maybe he would have been valued more." 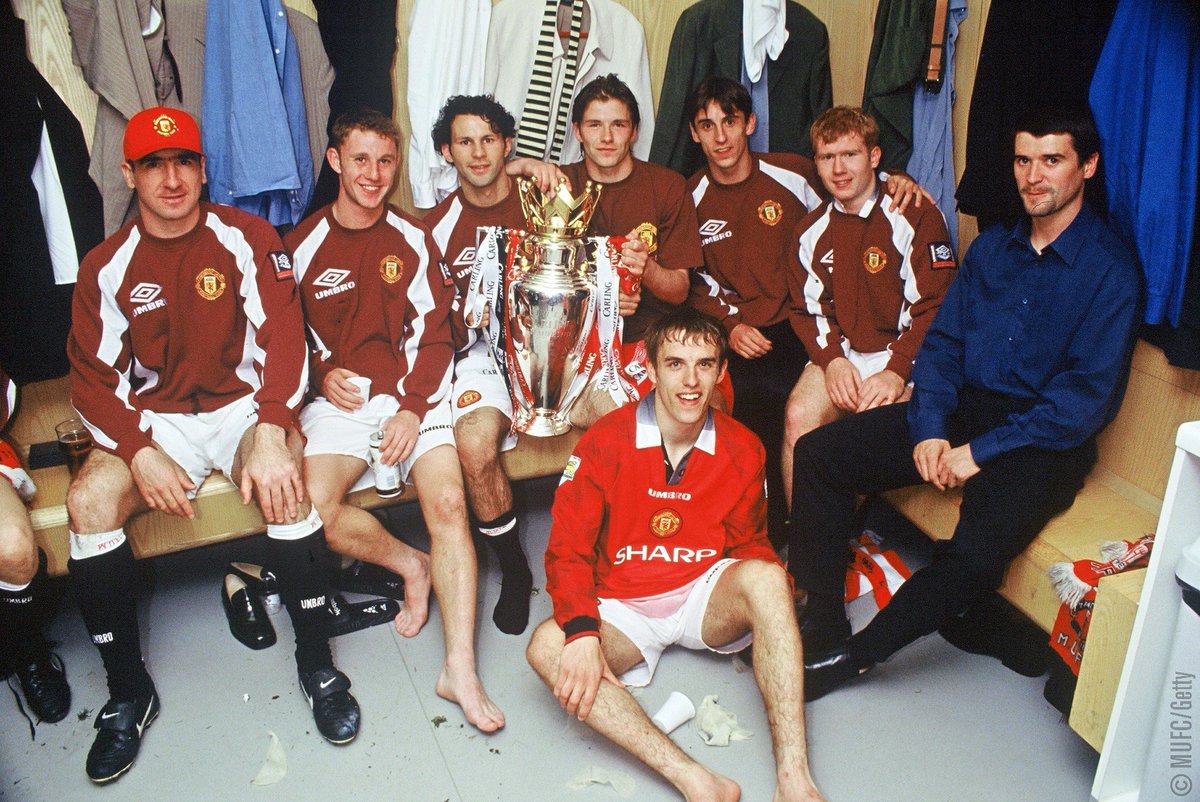 Fashionista, philanthropist, People’s Sexiest Man 2015, global icon and not a half-bad footballer. A boyhood fan of the club, Beckham made his maiden first-team appearance for Manchester United at the age of 17 and would go on to captain England 58 times in a career which was never far from the headlines.

Self-determined and enviably hard-working, Becks became perhaps the most influential and recognisable footballer of his age, setting a template, for better or worse, for the generations to follow and how footballers are perceived today. Has the United academy ever known a better right foot?

Northumberland-born Charlton moved to Manchester at the age of just 15 and became the defining star of the Sir Matt Busby era. Charlton scored a brace on his debut (with a sprained ankle) and went on to become Manchester United’s record goalscorer in his 17-year career as a player, netting 249 goals in his 758 games for the club.

A Ballon d’Or winner in 1966, he even has the South Stand at Old Trafford named after him so huge was his impact, and but for Wayne Rooney would still be the record goalscorer for both United and England.

Another Ballon d’Or winner in 1968 - following in the footsteps of teammates Charlton and Denis Law in the Holy Trinity - the inimitable Best can stake a claim to be Manchester United’s most legendary player. The Belfast Boy swapped Northern Ireland for Manchester as a teenager after scout Bob Bishop told Busby: “I think I’ve found you a genius.”

On his day, Best was simply unplayable, with ethereal feet that dribbled, dazzled and dazed in equal measure. His trophy cabinet may not be as jam-packed as others on this list but few footballers in history have been possessed with such blistering, magnetic talent. He was arguably the icon of his generation, sporting or otherwise. 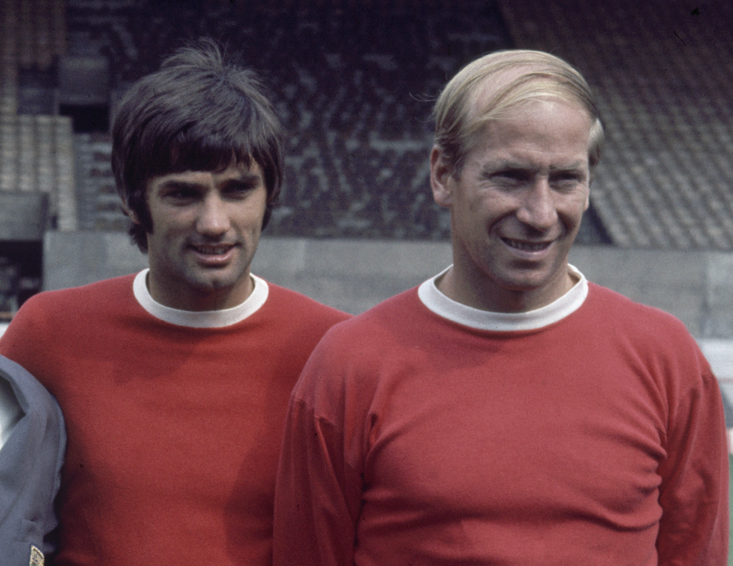 Gerard Piqué joined Manchester United’s academy in 2004 and was part of the Double-winning squad of 2008. But, as we all know, it is his longevity in the Barcelona set-up - the club at which he started - that has qualified him to be considered one of the best defenders of all time.

In his debut season at senior level for Barca, Pep Guardiola was a fundamental force in driving the Blaugrana to a historic treble and the subsequent domestic dominance that has defined Spanish football has been played out with Piqué at its heart.

That’s not even mentioning the fact he’s the only player on this list to become both a World Cup and European Championship winner.

Have we saved the best until last on our list? Quite possibly. Those who saw him, and played alongside him, have said Black Country boy Edwards could quite rightly claim to be the best player the club has ever seen.

“He was so good,” said teammate Bobby Charlton, who survived the 1958 Munich air disaster that claimed Edwards’ life at the age of 21. “When he was around you thought anything was possible.

"He was more than a great player – sometimes he seemed like some bright light in the sky. He was a giant.”

Everybody who saw him play believes he would have gone on to become one of football’s all-time greats. 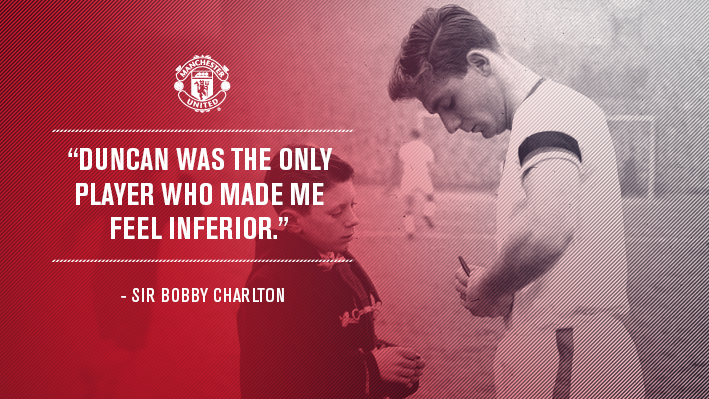 2631
2154
More
boxing
Pandemonium In Atlanta: The Last Great 15 Round Title Fight
The 1980s was a transitional period for the world of boxing. The fledgling cruiserweight division, inaugurated [ ... ]
motorsport
Finally, The Grown Up Lewis Hamilton We Have All Been Waiting...
“I'm an extremist so I'm either hated or loved.” It’s safe to say the British [ ... ]
sports
Patrick Mahomes, A $503M NFL Deal And The Richest Contracts...
"Chiefs kingdom, you've been with me since the beginning - from rookie year. You helped us [ ... ]
football
Five Bona Fide English Stars Who Plied Their Trade Down The...
Wayne Rooney: record-goalscorer for club and country. At Manchester United, the Croxteth prodigy performed, [ ... ]
boxing
Hypnotists, USB Sticks And A Megaphone: When Boxers Bring Out...
The winners and losers in boxing aren’t always decided in the ring by whomever has the most superior [ ... ]
football
President Vs Player: One Year On From Rebel Rapinoe Being On...
"I'm not going to the f*cking White House. No, I'm not going to the White House. We're [ ... ]
tennis
The Day A Flawless Fred Perry Stormed Wimbledon To Win A £25...
“Packed Centre Court sees strenuous struggles for Championships!’ screamed the Pathé [ ... ]
boxing
Five Unmissable Big Screen Boxing Masterpieces That Aren’t Rocky...
Like almost no other sport, boxing is tailor-made for the silver screen. There’s something in [ ... ]
us-sports
The Luckiest Man On Earth: When Lou Gehrig Bid A Fond Farewell...
In the Friends episode, The One Where Old Yeller Dies, the character Phoebe Buffay (Lisa Kudrow)  [ ... ]
motorsport
Why NASCAR Maverick Wendell Scott's Battle With Bigotry Is As...
It is less than two weeks after the assassination of John F Kennedy. On the dirt oval at the Jacksonville [ ... ]
sports
From Daring Sea Rescues To Shunning Hitler: The Greatest Acts...
Nothing warms the cockles and brings a lump to the throat as seeing, hearing or regaling acts of sportsmanship [ ... ]
football
Sun, Sand And Bicycle Kicks: The World Of Beach Football Deserves...
The dying minutes of the game, down one goal. Former Liverpool midfielder Jamie Redknapp composes himself, [ ... ]
boxing
From Hammering Holmes To Blitzing Berbick: Mike Tyson’s Five...
With a boxing comeback in the pipeline, a hugely popular podcast and a 400-acre cannabis ranch opening [ ... ]
boxing
Cassius Clay vs The United States: The Greatest Fight Of Muhammad...
On June 20 1967, it took an all-white jury just 21 minutes to find Muhammad Ali guilty of draft evasion. [ ... ]
boxing
Assault In The Ring: The Dirtiest Boxing Match In History
On June 28, 1997, Mike Tyson and Evander Holyfield shared arguably the most infamous night in boxing’s [ ... ]
sports
The Sportsman Interviews Anthony Curcio, Football Player And...
Anthony Curcio is the world’s nicest bank robber. Friendly, talkative and generous with his time, [ ... ]
football
From Van Basten's Volley To Müller Magic: When The Olympiastadion...
It has been 15 long years since a football was kicked at the Munich Olympiastadion in official club [ ... ]
tennis
History Makers, Record Breakers And Pimms: Why Wimbledon Is...
Weep in the realisation that this should have been the week of Wimbledon, arguably the most anticipated [ ... ]
boxing
From Knocking Out A Horse To Missing Gold Medals: Five Of Boxing's...
Boxing has had its fair share of pieces of folklore since the introduction of the Queensberry Rules, [ ... ]
boxing
Joe Louis, The Third Reich And The Most Politically Charged...
On June 22, 1938, with the world on the brink of war, two boxers from opposite sides of the Atlantic [ ... ]
motorsport
Fighter Pilot, Racer, Transgender Pioneer: The Brave Life Of...
Robert Cowell was naturally left-handed but forced to use the right at a young age. The child of a decorated [ ... ]
boxing
Blood, Guts And Determination: Remembering Lewis And Klitschko's...
After 44 fights, 41 victories, 32 knockouts and three heavyweight championships, on June 21, 2003, Lennox [ ... ]
boxing
The Brawl In Montreal: Sugar Ray Leonard’s Rude Awakening At...
Four decades ago, when the ink had dried on Sugar Ray Leonard’s contract to face a Panamanian [ ... ]
football
The Danish Club Giving Locked Down Fans The Ultimate Virtual...
English football fans got their first taste of the ‘new normal’ this week as the Premier [ ... ]
mma
Prevention Better Than Cure - Confronting Head Trauma In MMA,...
Oh, the ignominy. ‘Baby’ Jay Dee ‘The Prodigy’ Penn, an inspirational martial [ ... ]
sports
From Keano Vs Big Mick To Chicken Wing-Gate: When Players And...
The wonders of the modern world: the Taj Mahal; Kiyomizu Temple; Fenway Park. The home of the Boston [ ... ]
football
Henry, Rodgers And Klopp: Remembering Liverpool’s Love Affair...
“We're here to win,” declared Mr. John W. Henry, in November 2010.  The Liverpool [ ... ]
golf
Flying Kicks, Epic Insults And Hilarious Advice: The Very Best...
“He is who he is. You can ask him about anything and he’s never going to short-change anybody. [ ... ]
motorsport
James Hunt: The Motorsport Maverick With The Playboy Persona
James Simon Wallis Hunt was born on August 29 1947 in Belmont, Surrey. The seventh British man to win [ ... ]
football
The Wrath Of Oliver Kahn: Germany's Greatest (And Angriest)...
'Der Titan'. 'Vol-kahn-o'’.  In order to get on his good side, we’d [ ... ]
This website uses cookies
Cookies help us and our partners provide statistics. By browsing this website, you consent to the use of cookies in accordance with our Privacy Policy and Cookies Policy.
Accept & Close