Boxing
Features
Daly was a childhood star but his career would be oh so short
Jack Porter
16:00, 25 Sep 2020

“They’ll laugh at you, son. Wait until you’re a little older.” It’s 1920s London. A nine-year-old boy is imploring his father to let him attend the local gym for boxing try-outs.

Just one year later - at the tender age of 10 - that eager young kid would be fighting professionally. By 14 he would be sparring with the reigning world middleweight champion, fronting posters across London and punching 15 rounds as the greatest attraction Whitechapel had to offer. Aged 16, he would participate in an incredible 33 professional fights in just 11 months, against much older, and often heavier, opponents. For those who saw him, Nipper Pat Daly should be considered among the greatest British boxers of the 20th century. “If ever there should have been a champion, it ought to have been Nipper,” wrote the pre-war artist and bohemian Nina Hamnett.

But eight short years after tugging on his father’s sleeves to let him lace up, Pat’s boxing career would be all but over.

Born in Wales in February 1913, Nipper Pat Daly’s early childhood was a globetrotting one. It was in Canada where the obsession with boxing began, with the altar-boy Pat screaming on the sidelines of bunkhouse brawls after morning service. Upon his family moving to London, he was tutored in the sport by ‘Professor’ Andrew Newton, a former lightweight champion, at his Marylebone gym. The Professor would pressurise Pat to excel in this cruel environment that continuously teetered on the breadline, to the point of human limitation.

Pat’s grandson, Alex Daley, paints a vivid picture of this Twenties London life with its eclectic cast, fieriness and freedom, which was hard-fought, in his excellent biography of Nipper Pat’s life and career, Born to Box. It was a world where ‘schooling was unlikely to elevate you financially but a successful career in the prize ring just might.’ It’s why there were around six times as many professional British boxers fighting at any one time as there is today.

Pat’s prowess and stunning stamina was amazing even those outside the fighting world. A team of doctors wrote to Newton asking him for the privilege of medically examining ‘his prize pupil’. It was also gaining him attention overseas, once word has reached across the Atlantic. By September 1929, still aged 16, Pat was ranked 10th for his weight in the world by The Ring magazine, and received praise from the manager of Jersey Joe Walcott and world champion Joe Gans.“When I started work I created something of a sensation,” Pat later wrote in his memoirs, “It seemed that most of the young men in the crowd wanted to take me on, as I was 15 years old, skinny, and did not look like a fighter.” He became viewed in certain circles as the future of British boxing.

But as the distinguished boxing writer O. F. Snelling observed, ‘He went up like a rocket, burst into sparks well before he had reached his peak, and sank into darkness.”. By the late Twenties Pat was beating Britain’s best bantamweights with relative ease, but was constantly pressured to keep off weight, causing considerable strain. In training he would be instructed to suck oranges piece by piece or chew steak and spit out the residue, in order to not digest extra calories.  Furthermore, weigh-ins, unlike today, were held on the day of the fight, heavily increasing the risk of exhaustion. 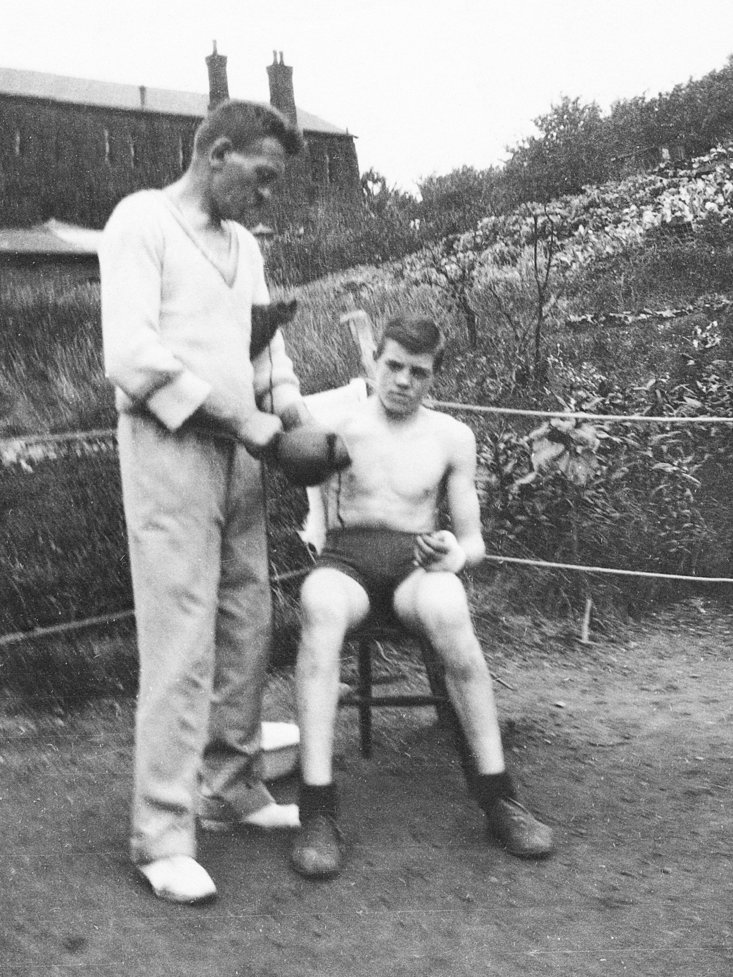 A fight with all-action Douglas Parker, a pugilist with considerable punch who would later KO the reigning British featherweight champion Johnny Cuthbert, would inflict Pat with his first knockout in over 80 professional fights. Though he could make weight, Pat had been left tired and weak. He was caught almost immediately after the opening bell. He would get knocked down twice more, the third time not getting up off the canvas. Pat didn’t even know he had lost the fight when he woke up in the dressing room and prepared to enter the ring once again.

Five days later he was fighting once more, in Liverpool, in a 15-rounder. Two days after that he was holding a boxing exhibition. The path was unrelenting, and the tasks were getting tougher. A gruelling battle with military man Seaman Tommy Watson - who would go on to fight Kid Chocolate at Madison Square Garden - saw him not only soak up plenty of punishment but attempt to give as good as he got. Pat was on the ropes from the first but prevailed until the 11th, when Watson’s power proved too much on the young man and the fight was stopped.

“The way that Daly took punishment only to recover and fight back like a tiger stamps him as one of the gamest battlers of the day,” declared Boxing magazine, despite the disappointment of the loss. 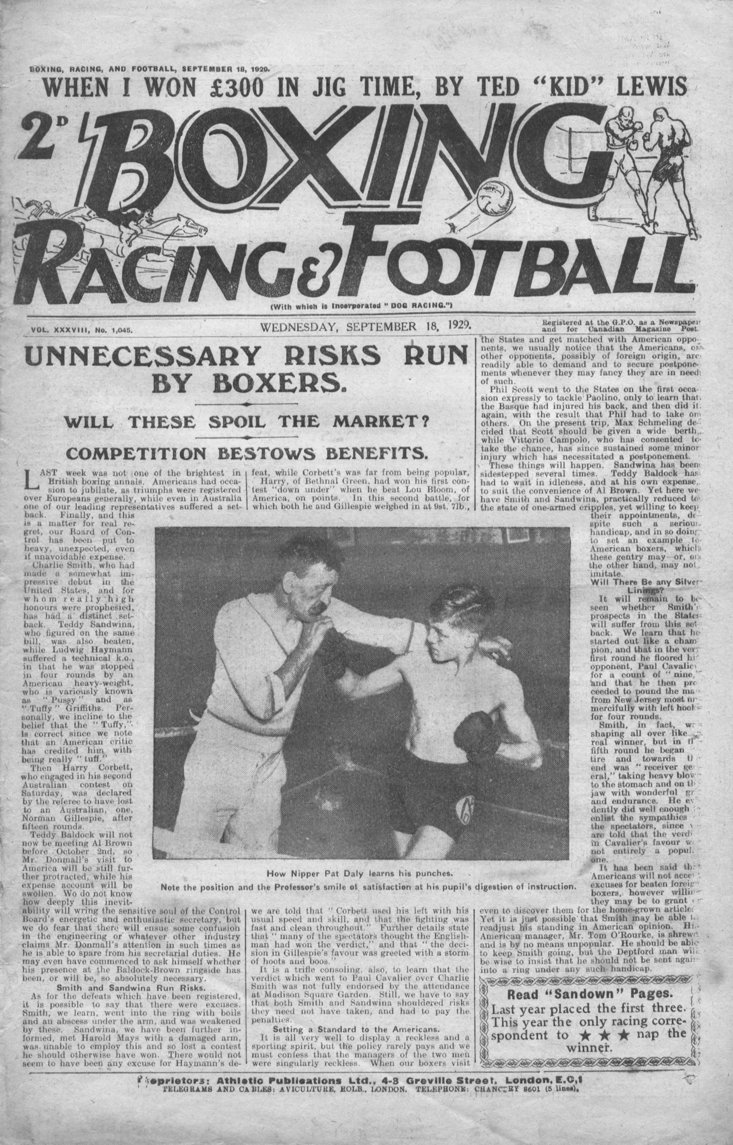 Pat was being burned out by the Professor, and was likely feeling the effects of concussion when being thrust into battle after battle. When unfancied substitute fighter Nobby Baker produced a stunning upset, the turn of form was palpable.

“I was feeling the effects of my fights with these hard-punching young men,” Pat would admit.

His last pro fight, aged 17, was a bout with another substitute, who he would ride to a comfortable fourth-round win by breaking his nose, but it would be a lacklustre-ending to a truly startling wunderkind of boxing. After his career had ended, Pat didn’t spurn the sport. Though he would not engage in actual fights (though pub patrons knew to not get on the wrong side of him), he would visit different gyms, seek out new sparring partners and further refine his craft.

It is the poetic irony that what makes his story stand out so is also the reason for the story’s conclusion.

Sports scribe Gerald Walter would write, “The story of Nipper Pat Daly is perhaps the greatest tragedy the sport of boxing has to offer. This phenomenally clever little fighter would have been a world champion, almost without a doubt, had he been handled in a proper manner.”

Too much, too soon, too young, too fast. If only Nipper Pat Daly had listened to his father’s advice, and waited until he was a little older...

Born To Box: The Extraordinary Story of Nipper Pat Daly, by Alex Daley, is available now through Pitch Publishing, RRP £19.99.

x
Suggested Searches:
Tyson Fury
Manchester United
Marcus Rashford
Lewis Hamilton
F1
Air Jordan
More
football
It Is A Miracle Lionel Messi Has Taken 17 Years To React To...
As Lionel Messi trudged off on Sunday, it felt like we were watching the real world in negative form. [ ... ]
football
Liverpool Have Three Weeks To Rescue Their Title Defence After...
It’s Pep Guardiola’s 50th birthday today, and the best gift the Manchester City boss could [ ... ]
horse-racing
Everything You Need To Know About The £5.7m Dubai World Cup...
On 21 January, one of the finest horse racing carnivals in the world kicks off as the Dubai World Cup [ ... ]
football
How Jimmy Hill's Strike Threat Turned £20 Footballers Into Multi-Millionaires
In January 2018, Mesut Özil signed a new contract with Arsenal Football Club. The German midfielder [ ... ]
tennis
The Incredible Story Of Mansour Bahrami, Tennis' ''Most Naturally...
“We are here to entertain,” insists tennis icon Mansour Bahrami. “If you want to be [ ... ]
football
Rafa's Facts, Mourinho's Respect, It's Football's Greatest-Ever...
It was the surest sign yet that Manchester United are back to cause trouble at the top. Jurgen Klopp’s [ ... ]
football
Why Man Utd Remain The Modern Giants, Even If Liverpool Are...
You can tell that football has changed a lot over the past eight years simply from observing some of [ ... ]
motorsport
Elfyn Evans Is Desperate To Make Up For His 2020 World Rally...
“I can’t repeat the exact words and how I felt at the time,” says Welsh rally driver [ ... ]
sports
The Cube, Swingball And The Home-Based Challenges To Get You...
Lockdown is here. Again. Once more the kids are off school and yet again we are left working from home [ ... ]
football
With Nine Teams In The Frame, Could This Be The Most Exciting...
Just four points separate second from seventh in the Premier League table, while leaders Manchester [ ... ]
football
'Big Fish' James Rodriguez Is Exactly Where He Needs To Be At...
James Rodriguez’s career so far has been a great big ‘what if’. Whereas some footballers [ ... ]
sports
''Hold My Beer'' - How Surfer Mikey Wright Leapt Into Action...
“Hold my beer” bellowed Mikey Wright as he tore off his shirt and charged towards the sea. [ ... ]
us-sports
The Headbutts, Fall-Outs And Four-Day Benders That Made Dennis...
They called him The Worm. It may now be over two decades since he last played at the highest level in [ ... ]
boxing
The Skipping, Sushi And 6am Starts Behind Canelo Alvarez's Billionaire...
Saul ‘Canelo’ Alvarez is not only one of the richest sportspeople on the planet, having [ ... ]
sports
Team GB Star Lutalo Muhammad's Guide To Sleeping Like An Olympian
Practice makes perfect, and Olympic athletes spend years honing their craft in pursuit of medal glory. [ ... ]
football
How Cheung Chi Doy Flew Solo To Become Hong Kong's Only European...
Sixty years ago, on 14 January 1961, two teams walked out at Bloomfield Road for a Saturday football [ ... ]
sports
The Top Motivation Tips To Keep Your 2021 Fitness Kick On Course
We are now getting stuck right into January and the new year, and with the first proper weekend behind [ ... ]
football
Remembering Josef Bican, The Only Footballer Cristiano Ronaldo...
It is the perennial argument.. Who is the greatest ever, is it Cristiano Ronaldo or Josef Bican? Ok, [ ... ]
motorsport
Lando Norris' Stunning McLaren 570S, £1.4m Track Test Cars And...
What were you doing at the age of 21? Finishing university, taking the first steps on your career ladder, [ ... ]
darts
Gerwyn Price Would've Quit Darts For A Wales Rugby Union Cap,...
Gerwyn Price dreamed of representing the Wales national rugby team. Life, though, works in mysterious [ ... ]
football
20 Years On, Is Eriksson's England Remembered For The Successes...
It was a time of relative success and front-page scandals. The FA’s decision to appoint England’s [ ... ]
football
Beckham's MLS Move Gets More Monumental Every Year, And Messi...
“I would like to play in the United States someday, it’s always been one of my dreams... [ ... ]
football
Cheers Bud, Messi Pays Respect To The World’s Best ‘Keepers...
Budweiser continues to celebrate Lionel Messi’s record-breaking 644th goal by sending every goalkeeper [ ... ]
football
No More Begging Bowls, Teams Like Marine Should Get 100% Of...
There was an inevitability about the 5-0 away win on the pitch, but Sunday’s third-round clash [ ... ]
sports
The Good, The Bad And The Downright Ugly, What Happens When...
Cardiff City Football Club is one of the most traditional organisations of a deeply traditional sport. [ ... ]
sports
Meet Milly Pickles, The Inspiring Para-Athlete With Five Million...
With five million likes and 204,000 followers on TikTok, and a brand deal with one of the UK’s [ ... ]
boxing
The Hard Work, Long Days And Big Meals Behind Tyson Fury's Incredible...
Tyson Fury has found solace in working out, discovering it is the thing that not only keeps him in shape [ ... ]
us-sports
How Kareem Abdul-Jabbar Brought The Lakers' Incredible 33-Game...
He towered at seven feet two inches tall. The sky-hook was in full flow. Once again the Los Angeles [ ... ]
motorsport
Biker Sam Sunderland Won't Let Covid-19 Kill His Dream Of Another...
It was back in 2017 when Sam Sunderland wrote his name into the record books, becoming the first Brit [ ... ]
football
James Rodriguez's Car Haul Includes £300k Worth Of Mercs, And...
James Rodriguez is an absolute Rolls Royce of a footballer and had Everton’s midfield purring [ ... ]