On 3 September 1939, Great Britain declared war on Germany. Two months earlier, at the funeral at the All Saints Church in Putney Vale, London, a peculiar floral tribute had been received by the mourning congregation.

“Six feet tall, the wreath of white Madonna lilies required two men to deliver it and to hold it upright for the press photographers, who were keen to capture the ribbon imprinted with the eagle and swastika motif and the name of the sender: Adolf Hitler.”

The man for whom the sympathetic wreath from the Führer was the deceased British driver, the first Englishman to drive and win a Grand Prix for Mercedes-Benz Richard ‘Dick’ Seaman.

Whilst leading the 1939 Belgian GP, the rain-soaked circuit caused his Silver Arrow to spin out of control and crash into a tree, creating a blazing inferno that the 26-year-old was tragically unable to escape out of.

The story of ‘Britain’s First Great Grand Prix Driver’ is expertly chronicled in ‘A Race with Love and Death’ as journalist Richard Williams reevaluates the speedster’s life and legacy, a man Williams states could well have been considered in the pantheon the country’s great sporting heroes of the era, Fred Perry, Prince Alexander Obolensky, and Sir Stanley Matthews.

Matt Bishop
@TheBishF1
Superb but eerie photo of a Mercedes-Benz W154 being raced at a wet Spa in '39 by Dick Seaman (born #OnThisDay in 1913), in pursuit of HP MÃ¼ller's Auto Union D. Eerie? Yes, sadly, for Seaman would crash into a tree on lap 22, suffering burns that proved fatal later that day. #RIP 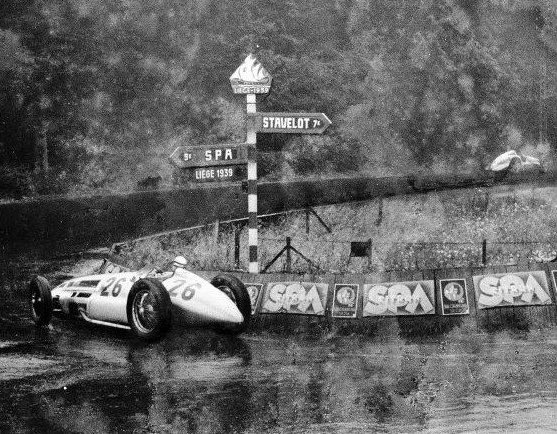 Seaman’s life was virtually bookended by war. He was born into a privileged household in Aldingbourne to Lilian and her third husband, in the year before the outbreak of WW1, and died 71 days before the United Kingdom would once again be in conflict with Germany.

Amidst the background of an uncertain and precarious Europe, Williams’ layered narrative also details the conflict between Dick’s mother and wife Erica, the German daughter of BMW founder Franz Josef Popp, who remained estranged at his funeral (“It would be hard to imagine the tension in the church and at the graveside between two heartbroken women.”)

The tale of Seaman who, though emerged ‘from a background of privilege and sophistication...fought his way to the top’, as thoroughly researched, accessible, and unchallenging to read as one would expect from the former chief sportswriter of The Guardian.

After his fatal fiery accident at Circuit de Spa-Francorchamps, history has not treated Seaman well.

The previous year after winning had won the German Grand Prix at Nürburgring in front of 300,000 strong crowd, ‘surrounded by Nazi uniforms’ he twice produced the infamous salute.

“Hitler stands no nonsense there,” he once wrote to his mother.

As Williams notes many of the British upper-class had respect and admiration for the Third Reich, however condemnable, but doesn’t isolate Seaman’s unavoidable connection with Hitler and the Nazi regime. A letter by his Lilian “His Excellency Herr Hitler’s noble tribute and message of sympathy has touched everyone in this county” whereas his German wife Erica attempted to disassociate herself from her homeland.

Williams also reassesses whether his death was the fault of the driver, racing “unnecessarily hard and unnecessarily fast” whilst leading the pack, as Mercedes engineer Rudolf Uhlenhaut created the consensus at the time. “No one was invulnerable on a wet track,” Williams proclaims.

The book makes an ideal companion piece to the equally excellent ‘Faster’ by Neal Bascomb, which tells the story of Seaman’s one-time track rival Jewish driver Rene Dreyfus, the man on the other side of the divide. it shares many of the same characters including, the Falstaffian presence of Albert Neubauer, the man in charge of the dominating Silver Arrows, the ‘reluctant Nazi’ Rudi Carraciola, and Bernd Rosemeyer, who suffered the same fate as Seaman the year earlier.

Fate didn’t decree it necessary for Seaman to redeem himself; would he have indeed ended up fighting against those whose adoration he had enjoyed, the employers in whose company he had readily cavorted?

Exploring his feats on the track and an insight into the man himself, Richard Williams’ book does, however, offer that redemption to Britain’s first of many in the pantheon of the nation’s motorsport heroes.

A Race With Love and Death by Richard Williams, Simon & Schuster, £20