Boxing
Features
The boxer has gone for a number of eye-catching looks
Simon Lillicrap
18:00, 05 Jan 2021

What would you spend your money on if you were one of the richest sportspeople on the planet? Saul 'Canelo' Alvarez, possibly the finest pound-for-pound boxer in the world, might well have secured a release from his 11-fight £275m contract with DAZN recently, but he still has money to burn. We all know about some of the beauties living in his garage, but what about his (presumably walk-in) wardrobe? When money is no object, what does a four-time world champion wear?

Here are some of the Mexican warrior’s most striking outfit choices. 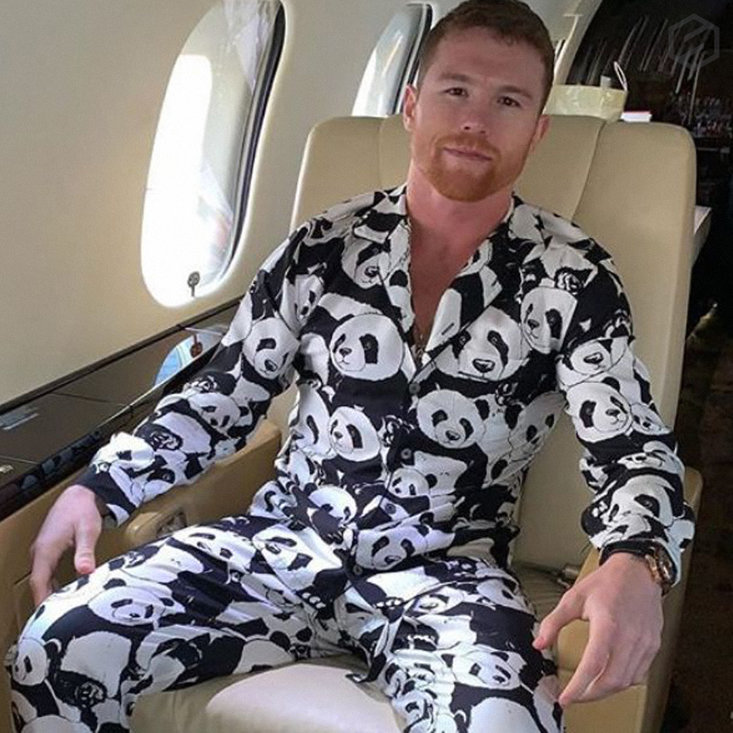 Okay, okay, there is only one place to start. Usually flying under the radar, the Mexican hit the headlines by wearing a suit covered in pandas while on his way to Las Vegas for his unification title bout against Daniel Jacobs in 2019. Sitting comfortably on his private jet, Canelo matched a panda shirt with panda trousers and paired the suit with bright white trainers.

I suppose when you own a private jet you can wear exactly what you want on-board and the get-up clearly brought him luck, as he won his fight with Jacobs via a unanimous decision. More boxers wearing animal patterned suits please. 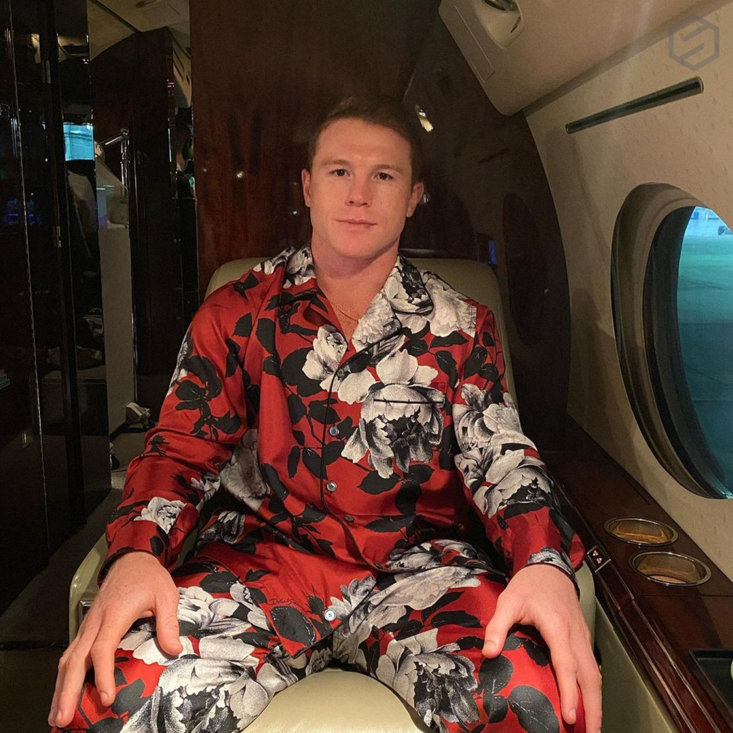 Ahead of his most recent bout in December 2020, Canelo was back on the private jet yet again and once more sported a suit to make you blush. On his way to handing British fighter Callum Smith the first defeat of his career in San Antonio, he decided to post a picture to his 7.5m followers on Instagram of him wearing a red floral number.

Clearly a big fan of the matching jacket and trousers combo, our favourite Mexican paired a patterned red top with bottoms covered in black and grey flowers. Now we know that, when fight week comes around, we are always going to get something special from Canelo. And we don’t just mean in the ring. 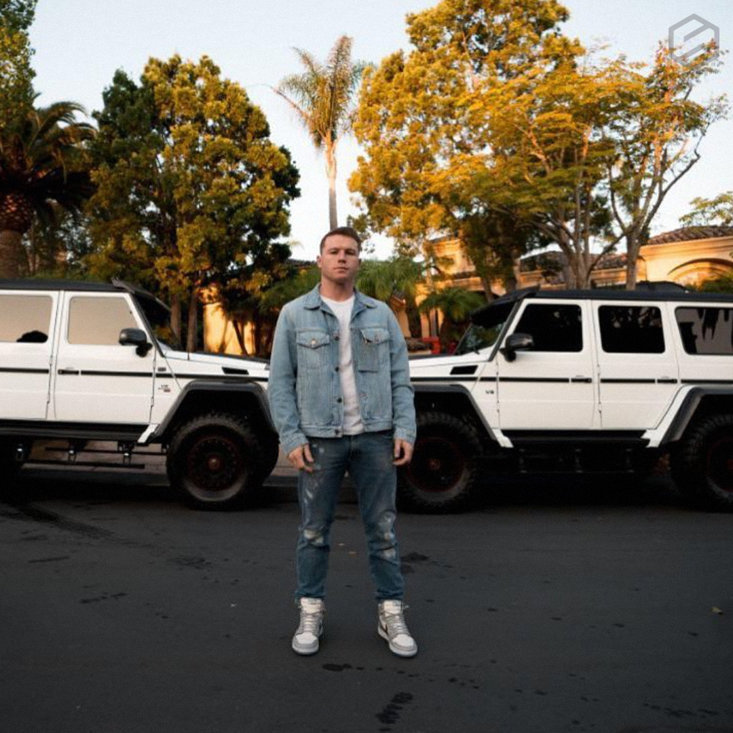 Double denim is always a big no-no in fashion, right? Well, who is going to tell Canelo that? Not us. The champion posed for one picture on his Instagram in front of his mansion wearing denim jeans and a denim jacket over a white t-shirt. And even though what is in the background is staggering, his fashion sense arguably steals the show.

Posing in front of two of his finest motors, a Mercedes Benz G63 AMG 6x6 and its four-wheeled sibling, Canelo doesn’t mind flaunting his wealth. Despite not being sold on the double denim, we do like his sneakers... 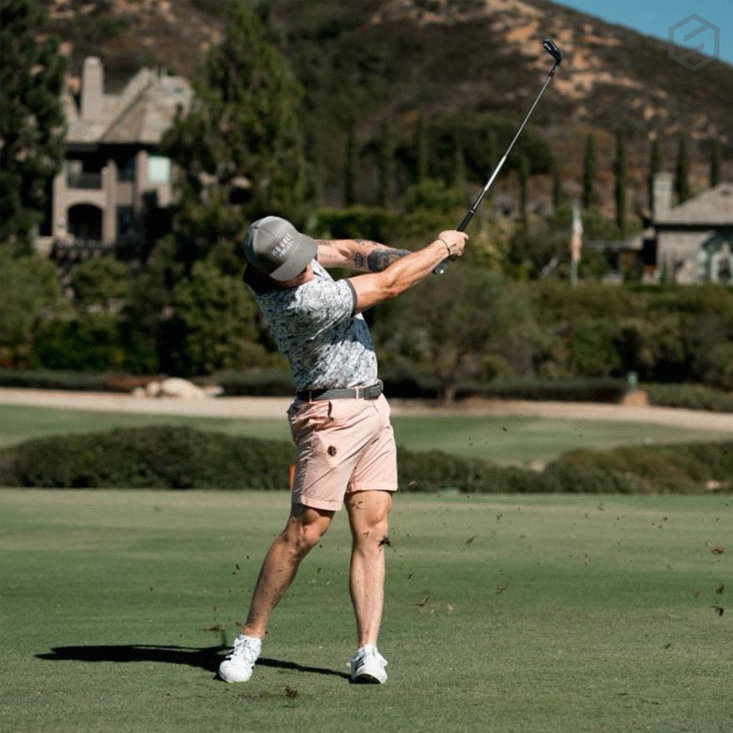 Now you’re talking. If you weren’t aware, Canelo is a massive fan of golf and often spends his free time enjoying a full 18. In fact, he recently told Box Azteca that he plans to quit boxing at the age of 37 and “play golf everyday”.

Having been taught the basics by Sergio Garcia he uses the sport as a distraction from boxing, and his attire isn’t too bad either. Far from a Pringle jumper kind of guy, Canelo instead prefers a short sleeve floral shirt tucked into a salmon pink pair of shorts. It is a great on-course look for the champ. 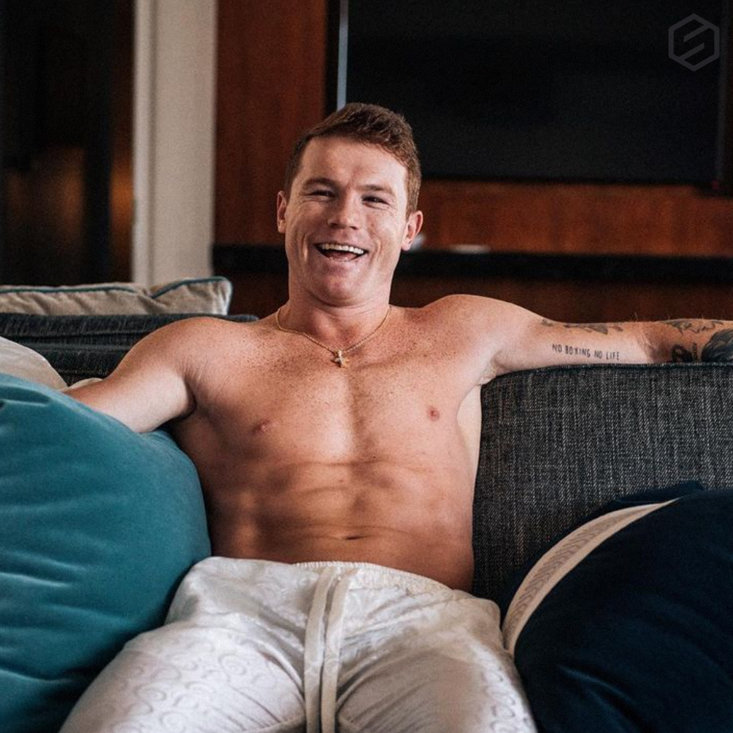 Grey Joggers. The staple of any wardrobe for any man lazing about his house, and the item of clothing that caused the viral #GraySweatpantsChallenge online is unsurprisingly the go to item of this sporting superstar’s wardrobe. Reliable, wearable and comfortable, Canelo is a massive fan of this simple item, as can be seen on his Instagram page.

Choosing to wear - well in truth, not a lot with these, instead he often shows off his rippling six pack and toned arms to his millions of followers. The joggers can go unnoticed, but trust us, these are an ever-reliable staple for the best pound-for-pound fighter on earth.