“I love football. Thank you.”

Two decades had passed since Eric Cantona had last played professional football when he once again bamboozled the watching world. Now aged 53 he took to the stage - t-shirts, hanging specs, flat-cap and uncombed beard - at the 2019 UEFA Champions League draw.

It wasn’t his attire that made the Frenchman stand out in the room of sea of suit and ties. Producing a speech that lifted from King Lear, Cantona was erudite, still equal parts eccentric and magnetic, still bonafidely unique. Cantona refused to watch football for several years after unlacing his boots and walking out of Old Trafford, aged just 30,  in 1997, claiming an absence of passion for the sport. He informed Sir Alex Ferguson of his decision to quit within 24 hours of United's defeat by Borussia Dortmund in the 1996-97 Champions League semi-finals.

By 1998 he had swapped The Theatre for film, starring alongside Cate Blanchett as Monsieur Le Foix in the Academy Award-nominated Elizabeth. And like the aforementioned Queen of England, to this day, Cantona remains a cultural icon in England, a brilliantly captivating but perplexing personality who rears his head when least expected. These are the many faces of Eric Cantona.

Football - with… Irwin and Giggs 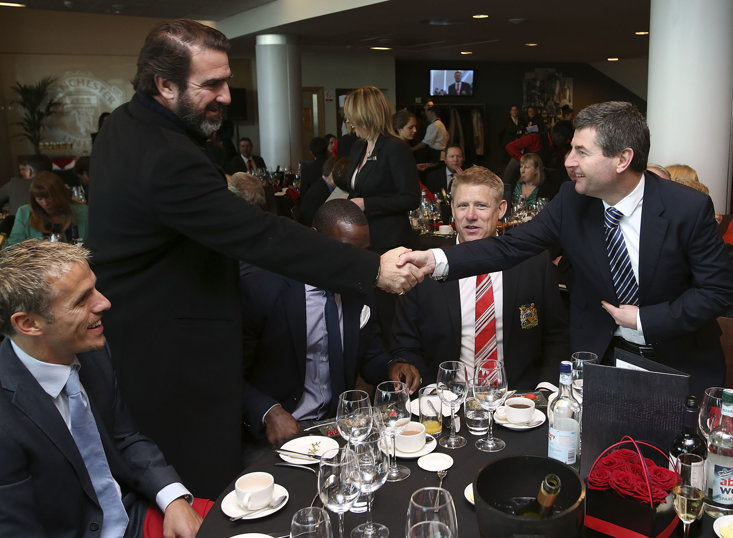 Eric Cantona’s arrival in Manchester as a £1.2million player from Leeds United in 1992 ultimately helped bring an end to the Red Devils’ 26-year drought for the top tier title for the Red Devils. By the time he left the club in ‘97, he had won five League titles in the space of six years. At Manchester United, he scored 82 goals in 182 appearances.

The Sunderland goal has been a fixture of replays for years, as have his pole-dancing antics in his ‘95 comeback in the 2-2 draw with Liverpool, and the nine goals in ten games in the latter stages of the 95/96 season to overcome the threat of Newcastle. Becoming the first foreign player to lift the FA Cup as captain. But let’s move away from the individual glory to focus on the majesty of what Eric brought to, and brought out of, the team.

Those assists for teammates Ryan Giggs, and Denis Irwin, the latter Cantona himself would describe as his finest ever moment in Looking for Eric. Speaking of which...

The 2009 film Looking for Eric was a charming and profound exercise by acclaimed director Ken Loach, who collaborated with the former footballer to combine the mythos and humanity of England’s most enduring foreign import.

Looking for Eric told the story of a middle-aged Mancunian football fanatic and dyed-in-the-wool United supporter whose life is going nowhere. One marijuana-induced trip later and the postman is receiving advice from the former United number seven. ‘I am not a man, I am Cantona’ the King half-mockingly told the protagonist  ‘Eric’ (Steve Everts), their relationship perfectly capturing the eternal bond between the city in the north-west and the footballer.

If you want something a little bit more left-field, ‘Mookie’ is wholeheartedly recommended, with Cantona playing a boxer who travels to Mexico with a monk (Jacques Villeret) and a talking monkey.

‘Alain Delambre, unemployed and 57, is lured by an attractive job opening. But things get ugly when he realizes he’s a pawn in a cruel corporate game….’

A great premise for Cantona to take centre stage, ‘Inhuman Resources’, the 2020 Netflix series that began airing in April, may well indeed provide the greatest exposure to Eric’s acting chops, with the streaming service boasting subscribers around the 170million mark globally.

It’s a different Cantona than the one, downtrodden, despairing, but with a fiery core - early on Cantona headbutts his weasley workplace boss (one can’t seem to imagine that happening somehow with Sir Alex). Just, don’t select the English-language dubbing that imposes an unrecognisable American over the distinguishable drawl of the man from Marseille.

It was a ballsy move from the most bombastic of Blues, Liam Gallagher when the former Oasis frontman opted to depict himself as a servant and chauffeur for the icon of Manchester City’s most hated rivals in the accompanying video for his solo single ‘Once’.

Cantona parades around his country estate, dressed regally with crown and royal red robe, being waited upon hand and food by the singer, miming such lyrics as ‘Oh, I remember how you used to shine back then…’ Two Manchester icons blended in the most surprising way possible.

Advertising - with… A Taste Suprême

While Calsberg have Le Chiffre, Budweiser has ‘Wassup’, and Cantona has been the most recent mug and mouthpiece for the lager, Kronenbourg 1664. Away from promoting it on TV screens, in 2017 the brand launched a limited edition range featuring the former footballer’s face on the front of the can, with the signature.

Better still, in 2015, Cantona promised to swim the English Channel if 10,000 consumers would view that Kronenbourg was the world’s best-tasting beer. Upon hitting that mark, the ‘swim’  happened… in a hot tub aboard a yacht! ‘Iconic, adored, a taste suprême’ reads the beverage’s iconic slogan, recited on screen by Eric Cantona.