There’s Sergio Agüero winning it in Fergie time. Liverpool finally ending 30 years of hurt in swashbuckling style. Manchester United making a mockery of Newcastle’s 12-point lead. But there has never been a more perfect season for a Premier League side than that of Arsenal’s 2003/2004 campaign, that most delicious filling in a decidedly lengthy, perfectly baked baguette: a history-defining 49-league game unbeaten run which became celebrated coach Arsène Wenger’s magnum opus.

“It is something more than amazing,” the Gunners’ talisman Thierry Henry espoused as his side were crowned the Premier League champions amongst the pomp and circumstance on the final day of the 2003/04 season, the crucial achievement of ‘The 49’. “Even though if someone ever does it again, we will still be the first one who has done it. That is something that will be sent down in history.”

To mark the 17th anniversary of the end of the run, here are the brilliant and often baffling statistics of that standard-bearing stretch: a 49-game maraud of claim, conquer and dogged refusal to be vanquished that ‘The Invincibles’ incredibly travelled into three separate Premier League campaigns.

There’s really no other place to start, right? Their overall run started with a 6-1 win over Southampton in the penultimate match of the 2002-03 campaign and ended at 49 games unbeaten at the ‘Battle of the Buffet’, when tempers flared as fierce rivals Man Utd inflicted the defeat to stop their opponents reaching 50 Not Out at Old Trafford on 24 October 2004. Of that 49, Arsenal won 36 games in total (20 at their beloved Highbury, 16 on the road).

That’s how many days separated the start of that run from the end which left the Gunners with egg on their faces (and pizza on Fergie’s, courtesy of Mr Fabregas). We’ve saved you from doing the maths between dates. If you want to sound really impressive down the pub, you could alternatively say ‘Wow Arsenal lasted 1 year, 5 months, and 18 days without tasting defeat!’ (or 12,888 hours. Or 773,280 minutes. Or 46,396,800 seconds). 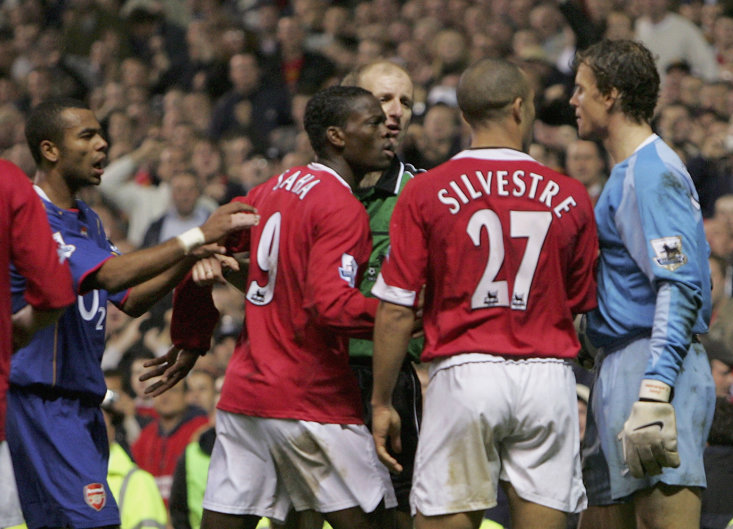 Thirty-three players featured for the Arsenal Invincibles throughout their unbeaten run. Pop quiz, hotshot, who bagged the fewest minutes of any Gunners appearance maker during this scintillating spell (answer at the bottom of the page)?

League game that Henry missed in total. The resulting game ended with a 1-1 share of the points with Leicester City on 6 December 2003 with Craig Hignett scoring in injury time for the 10-man Foxes after Ashley Cole had been sent off, the silly sausage.

We’re saving you the trouble of getting the abacus out again! 121 is the amount of points this great Arsenal side earned throughout their unbeaten run, 16 more than closest rivals Chelsea (105) under manager Claudio Ranieiri. The Invincibles earned at least twice as many points as five other sides who were ever-present in the Premier League throughout their unbeaten run: Birmingham City (59), Spurs (58), Southampton (55), Blackburn Rovers (53) and Manchester City (52).

The number of goals the Invincibles scored, 31 more than closest rivals Chelsea (81). Henry, with 39, quite predictably scored the most, with 30 of that tally creating his best ever EPL single-season haul on the way to winning his second of a record-breaking four Golden Boot awards for league top-scorer. He was followed by compatriot Robert Pires (24) and Freddie Ljungberg (10). 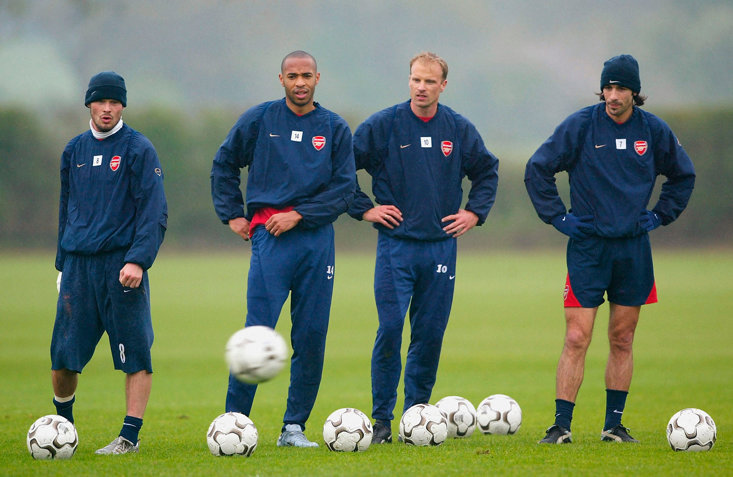 We’ve already provided you with the 773,280 minutes that Arsenal fans could revel in the run-up to their final win of the streak versus Villa. Of course, with life and stuff, it amounted to ‘just’ 4410 minutes of gametime. But did you know that supporters only needed to realistically fret for 263 minutes in close to 18 months? That’s the total amount of time Arsenal found themselves behind in a league match, with the most being 64 minutes against fierce rivals Tottenham Hotspur. 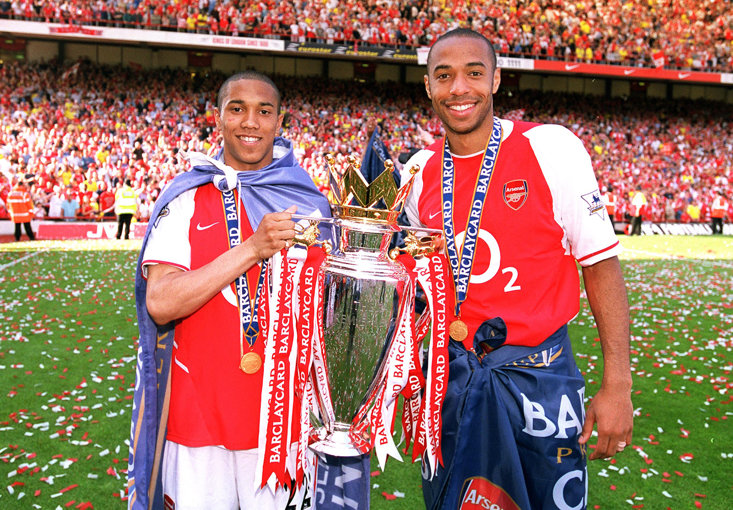 Years. The wait. As of 2020, since that season, it remains the last time Arsenal won the English top-tier title. To put that time period in perspective, in the 15 years between 1989 and 2004 they won five titles and in the time since there have been four different Premier League champions. Whatever the reasons for Arsenal being unable to ascend to the summit once more, there still has been no better way to proclaim yourself as conquerors of England. The legacy of the 2003/04 and of ‘The 49’ lives on.

x
Suggested Searches:
Manchester United
Liverpool
Manchester City
Marcus Rashford
Premier League
More
boxing
The Day Ali Talked A Suicidal Man Down Off The Ledge Of A Beverly...
Wilshire Boulevard in Los Angeles cuts right through the heart of Beverly Hills. One particularly famous [ ... ]
boxing
From Broadway To Hostage Negotiation: Ali's Best Moments Outside...
Muhammad Ali transcended the world of not just boxing, but sport as a whole, like no other athlete who [ ... ]
football
Zaha's Double, 1989 And 'Poogate': Inside The Brighton v Crystal...
This article first appeared in The Sportsman on 27th September, 2021 Crystal Palace against Brighton [ ... ]
boxing
Remembering The Fight That Sparked Sport's Greatest Rivalry:...
This article first appeared in The Sportsman on 12/01/20 “I hated Ali. God might not like me talking [ ... ]
boxing
George Foreman’s Faith: How The 45-Year-Old Heavyweight Stunned...
George Foreman swept through the heavyweight division like a hurricane, obliterating nearly all who [ ... ]
boxing
Last Round, Folks: When Boxing’s Invisible Champion Was Blitzed...
History has not been kind to Floyd Patterson. Countless world champions have drifted through the annals [ ... ]
boxing
The Life And Times Of Heavyweight Legend Jack Johnson
What do Alan Turing, The Doors frontman Jim Morrison and the comedian Lenny Bruce have in common? These [ ... ]
boxing
Pacquiao: From Poverty-Stricken School Drop-Out To Eight-Weight...
"I knew without a doubt I would become a fighter - I knew that the underdog can, and often does, [ ... ]
sports
Hulk Hogan, Mr. T And Madison Square Garden's Five Greatest...
It’s named after the fourth President of the USA. It’s where George Harrison had his concert [ ... ]
snooker
VR Mishaps, Pig Farms And American Hustles: When Ronnie O’Sullivan...
As it's snooker legend Ronnie O'Sullivan's 46th birthday, we thought we'd take [ ... ]
sports
Meet The Man Who Climbed Everest, Partied For A Week, Then Climbed...
This article first in The Sportsman on 08/12/19 There’s nothing normal about Nirmal Purja. After [ ... ]
motorsport
Frank Williams - A Formula One Pioneer Whose Team Went To The...
For much of the 1980s and 90s, Williams Racing was the biggest name in Formula One and Frank Williams [ ... ]
football
How Cantona Made Manchester United The Dominant Force Of The...
It started with Leeds United making an enquiry about signing Denis Irwin and finished with Manchester [ ... ]
football
Almost 30 Years Since THAT Goal, Davide Gualtieri Is Still San...
8.3 seconds, 28 years ago. That’s all it took for part-time footballer, part-time computer [ ... ]
boxing
River Wilson Bent Talks Coventry City, Newborn Baby And British...
“Imagine if Coventry City made it to the Premier League and I brought the British title home for [ ... ]
football
Neil Warnock - The Record Breaking Football Lover That Just...
When the whistle blows at Kenilworth Road for Luton Town's home match against Middlesbrough on Tuesday [ ... ]
football
Leicester's City Progress Is Proof That Vichai's Vision Has...
On this day three years ago Leicester City lost their influential owner, Vichai Srivaddhanaprabha in [ ... ]
rugby-league
The Birth Of The Grand Final: Rugby League's Biggest Of Big...
“I’ve said it for years… the last game of the season should be the most important,” [ ... ]
football
From Balotelli To Bullard, The Premier League's Greatest Ever...
It's been a full decade since Mario Balotelli lifted his shirt in Manchester City's 6-1 [ ... ]
motorsport
On This Day: Rookie Lewis Hamilton Loses F1 Title In Controversial...
On this day in 2007, we witnessed perhaps the greatest end to a Formula One season we have ever seen. [ ... ]
motorsport
How Lauda's 140mph Crash Marked The End Of The Age Of Innocence...
There are few worse moments to lose control than when driving at 140 miles per hour. The events on just [ ... ]
football
FA Cup Round-Up: Brilliant Buxton Make First Round As Dorking...
It was a night when Dorking Wanderers saw their dreams dashed by Hayes and Yeading, Stratford made some [ ... ]
us-sports
Celebrating Jim Brown - The NFL Movie Giant Who OJ Robbed Of...
Before OJ there was the OG. The Original Gangster. In fact he was front and centre of an action-packed [ ... ]
football
Sheriff Tiraspol - The Champions League Club With Two Faces
On the surface, it has been the underdog story of the Champions League so far. Never before has a club [ ... ]
boxing
From Taming Tyson To Bashing Buster, Evander Holyfield’s Best...
Today marks the 59th birthday of one of the best boxers to lace up a pair of gloves in the modern [ ... ]
football
Fernando Torres - Atletico's Local Hero, Liverpool's Tainted...
‘This means more’ is Liverpool’s oft-derided motto, but when they face Atletico Madrid [ ... ]
football
On This Day In 1987: The Rangers v Celtic Shame Game
Whatever the circumstances when Rangers face their Glasgow neighbours Celtic the [ ... ]
athletics
On This Day In 1968: The Greatest Sporting Protest Of All Time
Some sporting images will stay with us forever. Muhammad Ali standing over Sonny Liston, Michael Jordan’s [ ... ]
football
Dorking Wanderers Aiming To Complete The FA Cup's Ultimate Underdog...
Something is stirring in the sleepy, stockbroker-belt Surrey market town of Dorking. And if the Wanderers [ ... ]
boxing
Outside the Ropes: Jennings Gym - Training, Tunes And Gardening...
Jennings Gym is not your average boxing gym. Tucked away on the ground floor of a former cotton spinning [ ... ]