The Champions League delivered in a big way throughout the 2010s.

Here, The Sportsman runs through the top ten matches of the decade.

This game is a classic for what occurred after the game just as much as what happened on the pitch.

This was José Mourinho at his very best.

A defensive masterclass, his tactics stifled Barcelona and Inter hung on to win 3-2 on aggregate.

Mourinho loved it and couldn’t stop himself from running onto the pitch, showing off his success in the only way he knows how against his former club. The finger to the sky, tie flapping, remains one of the most memorable of Champions League images.

Inter went on to record a historic treble.

Messi ran the show, as he so often does.

However, this came against fierce rivals Real Madrid in the semi-finals of the Champions League.

Madrid went down to 10 men following the dismissal of Pepe, and Messi turned on the magic.

He put Barca ahead on the hour mark, then running 30 yards, he blew Los Blancos away for a second time with a scintillating run and finish. He had shown his talent yet again, but this time on the big stage of the Bernabeu. 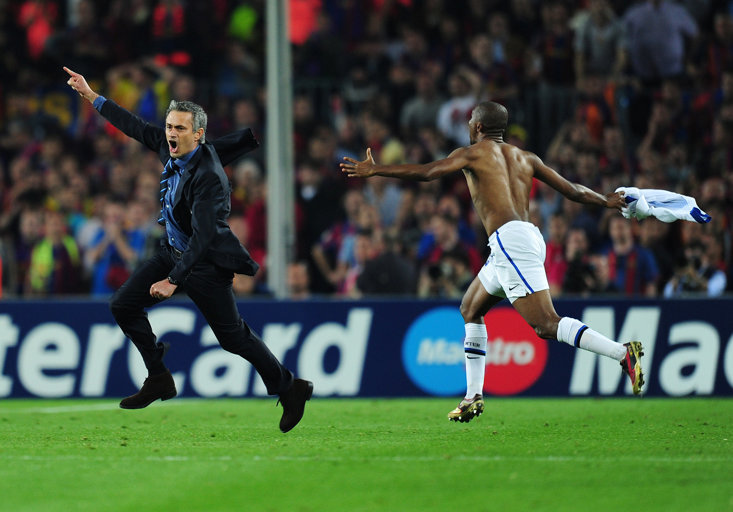 Gary Neville’s stunned commentary is perhaps as iconic as Chelsea’s leveller at Camp Nou as Fernando Torres achieved atonement for his stuttering spell with the Blues.

Ramires scored a brilliant chip just before half-time to set the game up. Then, Torres’ moment came.

Having dug in after John Terry’s dismissal, Chelsea were in.

Torres raced towards goal with only one thought in his mind. Keeping his cool, he expertly manoeuvred around Victor Valdes and slotted home.

Neville, and Chelsea, went crazy. The Blues were on their way to Champions League glory.

Even Radamel Falcao managed to score on Manchester soil, redemption after his ill-fated spell at Man United which brought a big smile to the faces of Red Devils fans.

City had to come from behind twice to take the advantage in the last 16 in a game packed with chances.

Falcao scored an exquisite chip over Willy Caballero as the City defence were found wanting. John Stones made amends with a goal though and City won through. A frantic, frantic match-up.

Trailing 4-0 after a hammering in the French capital, could Lionel Messi and co. pull off the unthinkable at Camp Nou?

Having built a 3-0 second-leg lead, the miracle was on until Edinson Cavani sucker-punched them with a vital away goal. But Barca wouldn’t be deterred.

They still needed three goals with 87 minutes on the clock before Neymar grabbed a brace.

PSG followers and even the odd neutral weren’t impressed with the officiating of this one, but that didn’t matter one jot to Barca.

Goatshela
@goatshela
Down 4-0 going back to the Camp Nou, no one gave a Barcelona a chance vs PSG. But they proceeded to pull of the greatest comeback in football history, capped off by a last second goal by super-sub Sergi Roberto

Leading 4-1 from the first leg, Barcelona were heavy favourites to get the job done in Rome.

However, Roma, with an away goal and clean sheet to cling onto, meant business and were two up on the night with half an hour to go.

The Stadio Olimpico was alive and effervescent.

Then up popped Kostas Manolas to head home at the near post. His celebration was wild, sprinting away in delight, eyes and mouth wide in pure ecstasy.

This is a decade Manchester United would rather forget. Barren compared to their European heyday of the nineties and noughties.

However, this was the true Red Devils spirit at its best.

Two down from the home leg, United, under new boss Ole Gunnar Solskjaer, looked dead and buried before Romelu Lukaku scored a typically well-taken brace either side of a Juan Bernat goal.

They continued to toil and battle until the end and were rewarded as a lengthy VAR consultation ended with the referee pointing to the penalty spot deep into injury time.

Marcus Rashford kept his cool to send United through and the travelling fans went delirious.

That image of Neymar, shellshocked on the touchline is iconic.

Nobody likes VAR but it was the referee’s little technological aid which made this one such a memorable bout.

Spurs went to the Etihad with a one-goal lead. After only 10 minutes, it was 2-2 on aggregate but City went 4-3 up on the hour mark in a frantic game.

Then the drama, and it was controversial. Towering striker Fernando Llorente bundled the ball home though it appeared to have hit his arm. Still, it was given.

Needing a goal, City charged forward and finally got one as Sterling found the net. The stadium erupted and Guardiola was ecstatic, but they were soon crushed as it was ruled out for offside. Agony in the home end, bedlam among the travelling contingent.

The Reds are the Kings of the Comeback in the 21st century and, to be honest, overturning a three-goal deficit against Barcelona probably didn’t come as that much of a shock to fans and players alike.

Belief is key at Anfield, and it so often sees them through against all odds.

Trent Alexander-Arnold’s quick-thinking from the corner spot to catch out Barca’s momentarily-dozy defence and pick out Divovk Origi was inspired. It was the clear highlight, overturning the deficit to send Liverpool through. Scenes.

Another late, late show and a stunning comeback.

Three-nil down on aggregate and two down on the night, Spurs’ hopes of reaching the Champions League final looked in tatters.

Lucas Moura though, playing upfront, scored two unlikely goals before the ball broke in the 96th minute for him to complete his hat-trick against a shell-shocked Ajax and fire Tottenham to Madrid.