To kick off a brand new series on The Sportsman we sent our man Chis Sutton to Anfield to meet up with former Liverpool striker Neil Mellor. Every month, the man who won the Premier League with Blackburn in 1995 will interview one of the league’s former players to discuss the biggest games they played in and so much more.

Mellor spent seven years at Anfield and was at the club during their Champions League win in 2005. But perhaps his greatest moment came in a home game against Arsenal, when he lashed home an injury-time winner in front of the Kop, to shock one of the best sides in Premier League history.

He talked Sutton through the goal at Anfield, which Liverpool fans still remember to this day:

“You want to have moments that you remember for the rest of your life. 15 years on I’m still talking about this goal, I have fans come up to me and tell me where they were when I scored that goal.

“The reason the goal was so special was because Arsenal were the best team around. They had gone unbeaten the year season before, they were the invincibles and won the Premier League title.

“They had finally been beaten a few weeks before at Old Trafford against Manchester United, losing that incredible unbeaten run.

“The first thing I did that day when I arrived at Anfield was head to the medical room to have an injection because physically I wasn’t fit enough to play. I had really bad knee trouble at the time, Milan Baros was out and I think Cisse was injured as well.

The first thing I did that day when I arrived at Anfield was head to the medical room to have an injection because physically I wasn’t fit enough to play. 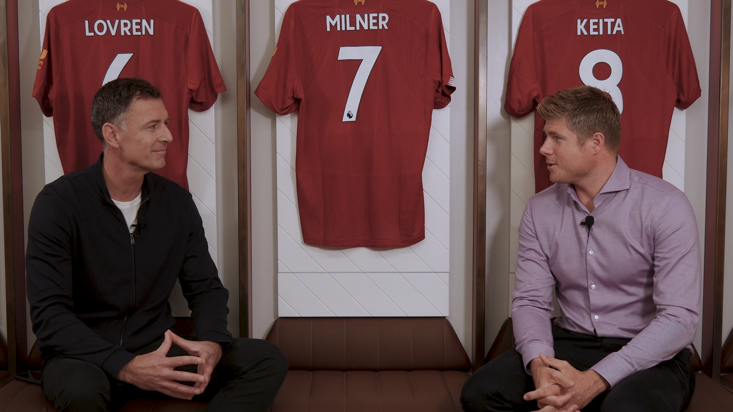 “It was my opportunity to play and obviously I wasn’t going to turn that down. I had a painkilling injection to numb the pain hoping that would help.

“I knew it was going to be tough playing against Kolo Toure and Sol Campbell, but the confidence I had was that I was at Anfield. I look around and I see Steven Gerrard in behind, I see Harry Kewell out on the left hand side, Xabi Alonso and Dietmar Hamann who were strong in midfield as well as Carragher and Hyypia. So I knew this was going to be a good game.”

Liverpool went ahead in that game thanks to a goal by Alonso and Mellor made sure he celebrated with the Spaniard, just so his face appeared on the newspapers the next day. As it happened, that goal would become a byline to the main event after Patrick Vieria equalised for the Gunners.

Mellor explained: “1-1 was a good result against that Arsenal side and I’m thinking ‘Why has the manager not brought me off?’. Chris Kirkland takes the free kick on the dead ball line, but before he takes the free-kick, I turned to Sol Campbell who was marking me and said ‘Sol can I have your shirt after the game?’

“I never really rated him as a player as I wasn’t fond of centre-halves, I don’t collect shirts but I bizarrely asked him for that in the lead up to the goal. I thought the referee was going to blow the whistle for full time as soon as the free-kick was taken.

“I go up for a header with Vieira, who’s about six foot five and I’m six foot, we both miss the ball. Sol Cambell and Kolo Toure go for the same ball and completely clean out Harry Kewell.

“It was a long way out and it was there to hit. I’ve hit it beautifully, the keeper was Jens Lehman, a German international. It goes in and the raw emotion is something that I’ll never forget. I shared the moment with the Kop and all the team came over and we were hugging everyone.

It goes in and the raw emotion is something that I’ll never forget. I shared the moment with the Kop and all the team came over and we were hugging everyone.

It was an incredible moment for the 21-year-old academy kid who had dreamed of scoring in front of the famous Kop end: “It was an amazing experience for a young player, scoring the winner against a top team at Anfield for Liverpool.

“It was an incredible moment for me. I would have loved to have scored that goal in a cup final, but it also felt like a cup final for me because Arsenal were such a good side. It was nice to have my own moment, because as I’ve said, Liverpool fans still remember that goal today.

“After the game I’m thinking ‘This is going to be a big night out’. I got the bottle of champagne which was nice, which I’ve still got to this day as I was Man of the Match.

“All the boys were buzzing in the dressing room and wanted to go into town, but I was so tired and still living with my parents at that time. I’ve gone home in my little Renault Clio which I was driving at the time, I watched Match of the Day 2 and listened to Gordon Strachan speak about how Liverpool played on that day with a hot Vimto in my hand. That was as glamorous as it got.”

It may not have been a night of glitz and glamour but Mellor wrote himself into Anfield folklore with that strike. This weekend, Liverpool will once again host Arsenal in the Premier League, but perhaps no player on that pitch will attain cult hero status quite like Neil Mellor did in 2004.