Boxing
Features
The Londoner hopes the 28 November bout will set him up for stardom
Elliott Bretland
13:00, 02 Nov 2020

“First off, I need to control myself,” says Daniel Dubois as he considers his best approach to fighting. “Once I feel like I’m in control of myself I can impose myself on the other guy, and that’s how it goes for me in the end. I have to be focused and my mind has to be 100 per cent in tune with my job and that’s how I roll.

“Really, I try to control my demons, do a job and execute it in perfect fashion. It’s all business on fight night, I don’t feel nothing, the Iceman.”

He’ll certainly need a cool head on 28 November when he comes up against Joe Joyce in a blockbuster bout for the Commonwealth and EBU European heavyweight belts. The fight, which has twice been rescheduled due to Covid-19, should tell us much about Dubois’ potential to challenge for world titles.

He’s had the right sort of training to prepare himself thus far, acting as a sparring partner for both Tyson Fury and Anthony Joshua as part of his rise up the ranks.

“They really are very different in style, different people from different backgrounds,” he tells The Sportsman. “But they’re both really good champions, top fighters and the best of this generation.” He pauses, answer seemingly complete, until, “They’re the best at the moment, anyway…”

Those delayed seven words are extremely telling. They show the steely determination rumbling in the 23-year-old’s mind and the supreme confidence he has in his boxing ability. This young man has just been discussing two of the finest fighters this country has ever seen, heaping praise on the pair, but it’s never far from his thoughts that one day he wants to better them. Dubois wants to be spoken of in the same sphere as them, a fellow British world champion.

Speaking to us fresh from another gruelling workout in camp ahead of his clash with Joyce, he is laser-focused despite the pair having exchanged barbs all year, clashing most memorably at a February press conference when even Joyce’s mother, Marvel, who is registered 93% blind, got involved. However, Dubois insists there is no bad blood between the pair. 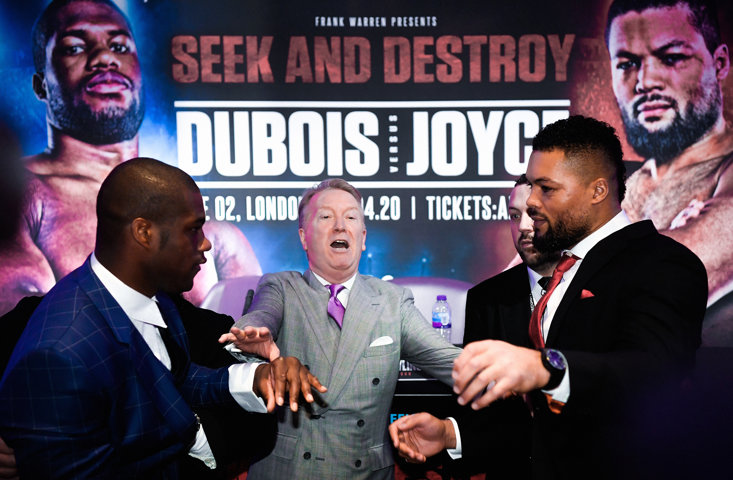 “It’s not personal, it’s just business,” he tells us. “It’s always been that way for me in boxing and I try to keep my emotions in check, not too much in it, just for fight night. Whatever emotions I have to conjure up then, I have to do it on fight night. And if that means winning by any means necessary then that’s what I’ve got to do.”

The strange nature of 2020, with lockdowns and multiple postponements, haven’t knocked Dubois out of step one bit, with the big puncher insisting he’s feeling better for the extra preparation that has been afforded to him.

“It’s been good,” he says of his latest camp. “It’s been hard work, day in and day out in the gym, and we’re just keeping it moving, keeping it rolling. I’m pushing myself and I’m doing different things out of the camp and the gym, with my strength conditioning and I’m feeling really strong, better than I’ve felt. On fight night I’ll feel even better and ready to go.”

Going into this fight, Dubois boasts 15 wins to his name and a knockout ratio of 92.9 per cent. Joyce, 12 years his senior, also has a 100 per cent win record from 12 fights and it’s a risky but needed match-up for both. It’s all on the line.

“Well the main part, and what’s really important to me, is beating them, but that record thing helps, it’s important on paper and people looking at that, yeah.

“With Joe, I think it’s a great fight but I’ve got to win by any means necessary with a destructive performance,” he adds, dubbing this by far the biggest fight of his career. “This fight will capture not only the boxing fans but the general public as well, and they’ll all be watching I think.” 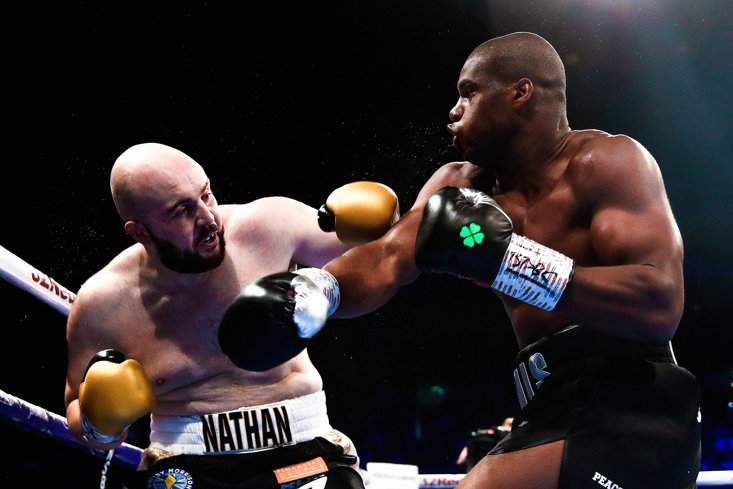 Regarded as one of the biggest hitters in the sport right now, it could be said some of Dubois’ other attributes are missed or under-rated but he’s happy if it means he can get the better of his opponents.

“Yeah, I hope it does!” he says, when asked could his immense power detract from his other fighting qualities. “That way, obviously, they won’t be prepared for it, but who knows. If the fans see it then that’s a good thing. If I’m winning, getting those KOs, then that’s ok.”

Dubois’ has a victory over Joe Joyce in his sights but he has big plans for the future too. “I want to be as busy as I can, winning as much as I can, beating as many good fighters as possible - whoever they put in front of me, and win the world title as soon as possible.”

There is no time like now. Last year, it was said Dubois was two years away from fighting his former sparring partners Fury and AJ but a lot has happened in that time, so is that still on?

“I think so, give me a…” he changes direction, “See how I do [against Joyce], man. And then we’ll know for certain.”

A win over Joyce would set him on the right path to glory, that’s for sure.