Football
Features
The former midfielder's new contract will give him the right kind of grounding for Anfield
Graham Ruthven
15:45, 19 Dec 2019

Within hours of the extension of Steven Gerrard’s contract as Rangers manager until 2024 being confirmed it was announced that Jurgen Klopp had also put pen to paper on a deal to keep him at Liverpool for the same length of time. The scheduling might have been coincidental, but there was an unavoidable symbolism to the two pieces of news.

“It was a pretty straightforward conversation when Ross Wilson and Stewart Robertson approached me,” Gerrard said of his renewal at Ibrox. “It was only over a week ago and I asked them to park it up for a week because of the magnitude of the games.

"But if those games weren’t there, it would have been done in five or 10 minutes. I think that shows the commitment myself and the staff have got here. We believe we have moved the club forward in a lot of areas.”

Despite his commitment to Rangers, who face Hibernian at Easter Road on Friday night, Gerrard has made no secret of his desire to be Liverpool manager one day. He was, after all, a spiritual leader at Anfield for the best part of two decades. Indeed, there is a sense of inevitability to the prospect of the former midfielder eventually taking the managerial reins at the club of his legend. The year 2024 might now be circled as the date for this to happen given the synchronisation between Gerrard and Klopp’s respective contracts.

However, many doubt that Gerrard would be prepared for life as Liverpool manager were he to make the jump straight from Rangers. They argue that he would be something of an unknown quantity given his lack of Premier League coaching experience. Unlike Frank Lampard, who has enjoyed early success at Chelsea after a season in charge of Derby County, Gerrard hasn’t even coached in the English Championship.

This argument doesn’t stand up to scrutiny, though. In fact, Gerrard is receiving the perfect induction to top-level management at Rangers, a club where anything less than winning isn’t tolerated, where even a single defeat can spark a full-blown crisis. After operating in Glasgow’s footballing goldfish bowl, a return to Merseyside might well be something of a relief.

Rangers Football Club
@RangersFC
🆕 Gerrard 2024 🆕
#RangersFC is today delighted to announce manager Steven Gerrard has agreed a two-year extension which will keep him at Ibrox until the summer of 2024.
4446
25752

Klopp himself has even tipped Gerrard to succeed him in the future, telling FourFourTwo: "If Liverpool were to sack me tomorrow, then maybe Kenny Dalglish would be the first choice to replace me, but they would probably bring Stevie down from Glasgow.

"If you ask who should follow me, I’d say Stevie, and I’d help him whenever I can. If someone gets your job, it’s not about them, it’s about you not being good enough.”

Gerrard also has the backing of fellow former Liverpool players such as Jamie Carragher and Jason McAteer.

“Why not? There will probably be a clamour for a lot of people whenever Jurgen Klopp decides his time is up at Liverpool but hopefully that’s a long way away,” Carragher told the Liverpool Echo.

“There’s no doubt Steven Gerrard will come into that because of the job he’s doing at Rangers but also because he’s a Liverpool legend.

“He’s doing a fantastic job at Rangers so that will certainly help him.” 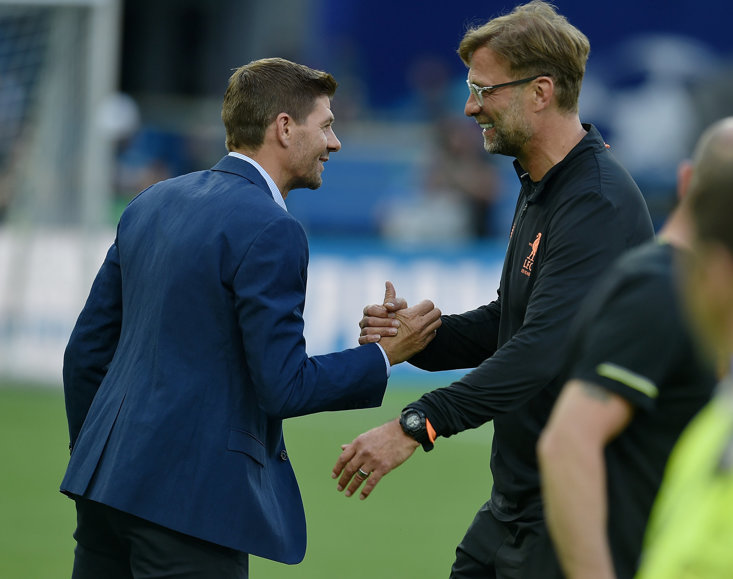 “Gerrard made a clever move going to Rangers to begin his management career – and I wouldn’t be at all surprised if stop two on his journey is Anfield,” McAteer adds.

"With Stevie, he would be able to walk into a dressing room full of fabulous players and have an outstanding opportunity to continue Jurgen’s work. And, of course, he would be given a lot of time by fans because of his reputation and his legacy. He would certainly look at what Frank Lampard has achieved at Chelsea, where he is doing a magnificent job.

"I’m sure Frank would tell you he hadn’t expected it to go this well but he always had the cushion of knowing he had time in the bank because of his status among the fans at Stamford Bridge.”

Right now, Gerrard isn’t just proving himself in Scotland, but in Europe too. The 39-year-old has enjoyed great success on the continent, leading Rangers through four qualification rounds to the group stages of the Europa League last season and taking them into the last 32 this season. From 28 European games, Gerrard’s Rangers have lost just three. Paired with Braga in the round of 32, the Ibrox side could make a genuine run in the Europa League this season. They won’t be easy to eliminate.

This experience outweighs anything Gerrard would gain from spending time in the English Championship or even in the lower reaches of the Premier League. The best way he can prove his readiness for the Liverpool job, whenever it next comes up, is by realising a long-term vision at Rangers, by taking the club back to the top of the Scottish game and keeping them there, all the while leaving an impression on the European game. Such qualifications would surely impress his former employers.