Football
Features
The group stages are a load of waffle and box-ticking before we get the meaty goodness of the knockout stage
Simon Lillicrap
06:55, 10 Dec 2019

It should be the most wonderful time of the year in the Champions League, but instead we're bracing ourselves for a week of anti-climax. Just sixteen of the 32 teams left in the competition have something to play for on matchday six over Tuesday and Wednesday, making many of the scheduled matches meaningless.

With the richest teams in world football coming up against teams who simply cannot compete on that level, we too often see unequal scorelines, walkovers and barely competitive games being played out. Just look at some of the results in this season’s group stage:

These results do not epitomise the premier European football competition. Simply put, the group stages are, for the most part, a load of waffle and box-ticking before we get the meaty goodness of the knockout stage.

More often than not in the group phase, games are basically over before they have really begun. Almost 10 percent of group matches in the past five seasons have seen teams scoring five-plus goals to win by four or more. Routs are the norm.

Amazingly, this has actually been one of the more competitive Champions League seasons but we still find ourselves in a position where managers of heavyweight clubs are being asked more about how many youngsters they will pick than how they intend to take down their opponents.

Jose Mourinho should be taking Tottenham to Bayern Munich with his focus solely on achieving a great result for his club but that instead he is using the game as a rotation exercise.

We know that after that we go to Wolves on the weekend, and Wolves is one of the teams that is in front of us in the table. We have to look to this game, to Bayern, with all these in mind.

That should not be the talk of a Champions League manager, neither Pep Guardiola's need to insist he will take the trip to Dinamo Zagreb seriously in order to retain the integrity of Group C: “We’ll travel with the intention to win. Of course, you always need to have a sense of urgency to take the result and win the games, but out of respect for Shakhtar Donetsk and Atalanta we have to do that.”

Ahead of the final round of fixtures, we know just half of the qualifiers for the knockout stages and it is conceivable that the European champions Liverpool could still fall at this hurdle. Chelsea, Ajax and Valencia are all still vying for the two qualification spots in Group H and Atalanta will take on Shakhtar in a straight shoot-out for the knockout stages. These are very much the exceptions that prove the rule.

The biggest shock one can envisage is that Red Bull Salzburg could knock Liverpool out with a win. However, even with their incredible development of youth players and the fact they haven’t even been in the group stage for 24 years, that potential win isn’t really the story of an underdog. Being funded by the biggest energy drinks supplier in the world hardly puts them on the same level as Sutton United. 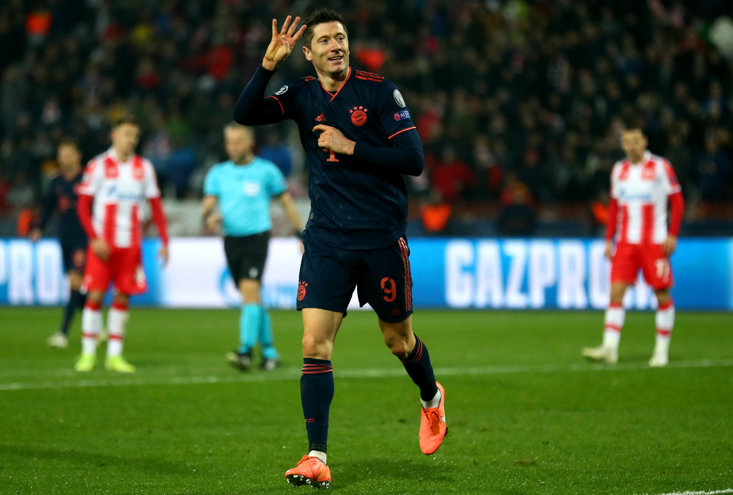 The group stage simply provides too many one-sided showings from Europe’s big clubs and the current format of the competition also gives them more second chances than anyone really deserves. Liverpool lost half of their games in last season’s group stage and still went on to win the entire tournament. Real Madrid didn’t turn up in their first game this term and have been fairly poor throughout, yet Los Blancos still qualified with a game to spare.

In the rest of the groups, there have been no shocks. The big boys Barcelona, PSG, Manchester City, Juventus and Tottenham are all through with a game to spare. Every season we get the same thing, the same predictable group stages and more or less the same teams competing in the last 16.

There has been some initial talk of change, but the European Club Association’s suggestion of a European Super League has temporarily put Champions League reform on the back burner, as UEFA president Aleksander Ceferin revealed earlier this year:

“We are currently in the process of gathering feedback from our national associations and I feel – more generally – that a new discussion now would be premature as we are analysing feedback and proposals coming from different parties.

“At the same time, as you know very well, UEFA deliberately kicked off the review process for the 2024-27 competition cycle much ahead of our regular schedule and we are therefore in no hurry. We do not, in any case, expect to make a decision this year.”

Of course, whether changes are made in five years’ time or not, it all comes down to money. The extra games and the qualification process all means more money for UEFA and the clubs participating. It isn’t that much of an issue that we see the rich teams in the knockout stages as they can produce some spectacular drama, but where is the jeopardy? Where is the drama until February or March?

Last season was potentially the best of the lot, with Tottenham’s late drama, Ajax’s shock results and, of course, Liverpool’s awesome semi-final comeback against Barcelona. But all of this amazing fare came in the knockout stages. Can anybody even remember one standout moment from last season’s Champions League group stage?

The group stage is obsolete. The simple way to bring some drama to the tournament before the New Year is to make it a knockout competition from the get-go. No second chances. No taking it easy. Lose over two legs and you are out.

Of course, the huge amount of money in the Champions League means that we are unlikely to see any drastic changes, but there needs to be some serious consideration given to how some life can be injected into the group stage.

x
Suggested Searches:
Tyson Fury
Manchester United
Marcus Rashford
Lewis Hamilton
F1
Air Jordan
More
boxing
Now Or Never For Billy Joe Saunders, It's Time To Step Up And...
Controversial but supremely-talented WBO super-middleweight champion Billy Joe Saunders fights for the [ ... ]
football
Lionel Messi The Younger, The 'Tiny Little Thing' That Took...
It is December 2000. Three men have congregated in the Pompeia del Montjuic tennis club cafeteria. One [ ... ]
boxing
Self Confident And Self Aware, ‘King Arthur' Is Relishing Anthony...
Lyndon Arthur is quick to interject even if we are reeling off a list of his impressive boxing credentials [ ... ]
football
Everything You Think You Know About José Mourinho Is Wrong
It’s 20 years now since José Mourinho first tried his hand at football management. A journey [ ... ]
boxing
The Secrets Behind Anthony Joshua’s Gruelling 14-Hour A Day...
Anthony Joshua is a man mountain of a heavyweight champion, standing at 6’6 and weighing in at [ ... ]
us-sports
Remembering ‘The Big Cat’: The NBA Icon Who Paved The Way For...
At the last census, across 30 different franchises, just under 75% of National Basketball Association [ ... ]
football
£9M Deals And 2.7M Insta Fans, It's The Top Teens In European...
Youssoufa Moukoko made history in November, becoming the youngest player ever in Bundesliga history, [ ... ]
football
Bugattis, Ferraris, Lambos, Top Five Motors From Ronaldo’s Insane...
On paper, Cristiano Ronaldo has everything. A chiselled body, a giant mansion and a delightful family [ ... ]
motorsport
First Men In: Jennie Gow Talks To The Heroes Who Pulled Grosjean...
When the first responders, Dr Ian Roberts and Alan van der Merwe, pulled up to the stricken Haas car [ ... ]
boxing
The Home Of The $1BN Boxing Deal Lands In The UK, All You Need...
Are you ready to get into DAZN? Finally, it’s sunlight for the British-based blockbuster subscription [ ... ]
sports
Feast Your Eyes On Our Five Fantasy Gifts For The Fitness Fanatic...
Every family’s got one, the fitness fanatic. The one who’s a slave to the strava, the one [ ... ]
cycling
How Emily Chappell Went From Courier To Conquering The 4,000km...
Emily Chappell was once an imaginative inner-city courier, who thoroughly enjoyed riding round metropolitan [ ... ]
sports
Bow Down To Keegan Hall, The Artist Behind This Amazing Drawing...
With just a handful of pencils, a $5 sheet of paper and a whole lot of talent, Keegan Hall blew up the [ ... ]
football
Money, Moods And Mario: Micah Richards On Life At Manchester...
Micah Richards has admitted that Manchester City’s takeover more than a decade ago split the dressing [ ... ]
sports
Big Waves, Exotic Dancers, The Life Of UK’s First Pro Surfer,...
Hawaii is a lost paradise. Ted Deerhurst was drawn there as a dreamer. It was his Mecca, the ultimate [ ... ]
football
With 313 Goals Between Them, It's Football's Greatest Ever Goalscoring...
It’s one of the sights which makes football fans giddy, a goalkeeper striding up for a corner. [ ... ]
boxing
Anthony Joshua And Me: Legendary Team GB Coach Reveals All About...
“He was shaking like a leaf!” Paul Walmsley, Anthony Joshua’s former Team GB [ ... ]
sports
Career Ending Dogs And Huge Gatecrashing Alligators, When Animals...
We love all creatures great and small but sometimes pesky critters and colossal creatures, [ ... ]
rugby
Wales Face Strong England Against A Backdrop Of Departures,...
It has been 20 months since Wales lifted the Six Nations trophy as Grand Slam champions. Wayne Pivac [ ... ]
boxing
The Mike Tyson Interview: ''Living Takes A Lot Of Courage''
Mike Tyson’s life has been a well-documented roller coaster ride. A difficult childhood, then [ ... ]
football
The Secret Boot Camp And Drills That Made Marcus Rashford The...
If we’ve learned one thing about Marcus Rashford in 2020, it’s that he doesn’t rest [ ... ]
boxing
35 Years Of Rocky IV, 10 Hard-Hitting Facts About Balboa’s Greatest...
Can you believe it’s been 35 years since Sylvester Stallone’s Magnum Opus, Rocky IV, premiered [ ... ]
sports
How The Art Of Ice Climbing Saved The Life Of Teenage Drug Addict...
At just 12 years old, Margo Talbot was using drugs and drink to help medicate her juvenile depression. [ ... ]
boxing
When's It On? How To Watch? Why No Knockouts? Your Tyson-Jones...
Haters gonna hate. For Taylor Swift 2014, read Mike Tyson 2020. He’s back in the ring this weekend [ ... ]
sports
Ruqsana Begum, The Kickboxing Champ Who Kept Her Career A Secret...
Muay Thai kickboxing isn’t for the faint of heart. Pain is a bedfellow. An adrenaline-fuelled [ ... ]
sports
Meet The Man Who Can Hold His Breath For 7 Minutes And Freedive...
“The look, of love….is in your eyes...”  One hundred metres underwater, with [ ... ]
boxing
Anthony Joshua's £1M Car Garage Boasts A Stretch Roller And...
Killer speed, energetic and ferocious, Anthony Joshua’s car collection is just like his boxing [ ... ]
football
To Naples And To The World, Maradona Was More Than Just The...
Naples is not a city, it’s an experience. It is a heartbeat, a way of life. Diego Maradona got [ ... ]
sports
How Emily Harrington Became The First Woman To Climb 3000ft...
There was 3000ft of sheer granite between Emily Harrington and greatness. The monolith had proven her [ ... ]
football
All Hail Roc Nation, Jay-Z's £56M Powerhouse With Rashford And...
Seriously, how can Jay-Z possibly have 99 problems when his brilliant entertainment company Roc Nation [ ... ]