Us Sports
Features
The Brit has overcome numerous troubles to make it to the top
Kris Voakes
16:00, 12 Oct 2020

It has been a tough year for Efe Obada. But then, for a man who has been a victim of human trafficking, spent time sleeping rough, passed through countless foster homes and fell in with a south London gang, ‘tough’ is nothing new. The Carolina Panthers defensive end is one of a small band of British players plying their trade in the NFL, but it’s hard to imagine that anyone has taken a more arduous path to the top of the sport than the one Obada has travelled.

His 2020 has involved moving 4,000 miles away from his Covid-susceptible wife, only to later be cut from the Panthers squad and then re-signed a couple of days later. Yet when you consider how he got this far, the last 12 months have been a relative breeze.

Born in Nigeria, he was living in the Netherlands at the age of 10 when he and his sister were trafficked to the UK by someone who was meant to be looking after them. Instead, they ended up abandoned and alone on the strange streets of Hackney in east London. The rest of their childhood became a fight for survival.

The pair spent a couple of nights sleeping rough until a kindly security guard allowed them to stay in an office block and found them food. From there, they were able to get back in touch with their mum, who arranged for them to stay with a family friend for a while before they eventually went into foster care, though they still didn’t manage to remain in any one setting for long. At least he always had his sister by his side, and had a basis from which to build a life for himself. 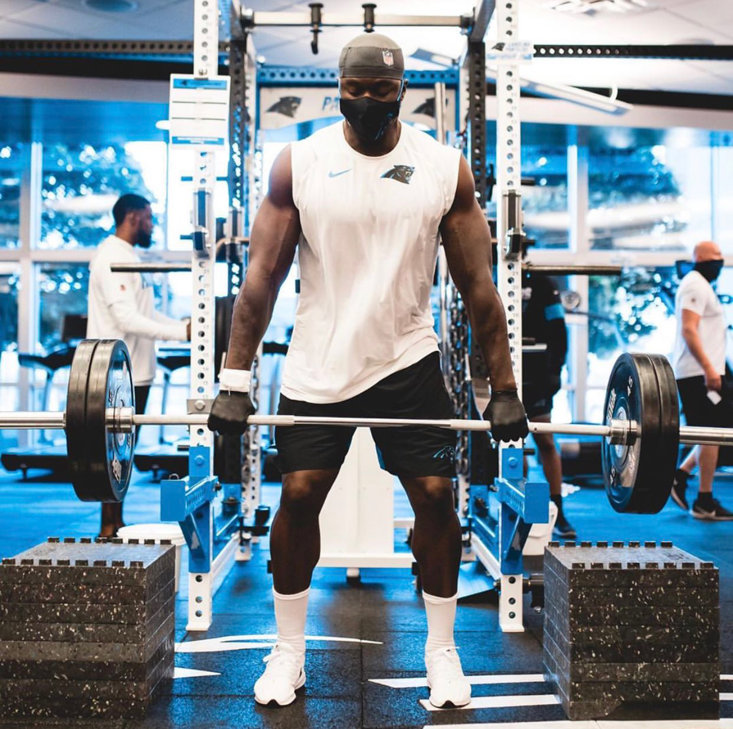 “Social services were accommodating that way,” Obada told the Panthers website. “They kept us close. They put us in homes with African or Caribbean backgrounds so cultural differences weren’t too bad. I went to secondary school, to college. I tried to progress to university but I couldn’t because of immigration issues. I went to Kingston University for a few months. I was working nights and studying during the day. But university fees went up to £9,000, which was ridiculous. I would have done architecture.”

Struggling to get his head around his constantly-changing circumstances and the apparent lack of outside help, Obada was shown compassion and given a sense of belonging by a gang near his Stockwell home. “It’s human nature,” he explained to The Guardian in 2019. “We all want to belong somewhere, to feel loved, needed and valued. You look up to the wrong people because you feel they will help you survive.”

During his association, three of Obada’s friends were killed in gang wars. Realising this was not the life he’d battled through his younger years to attain for himself, and knowing he had to get out, he went for a clean break. He and his girlfriend, now his wife, made the decision to put the difficult reality of south London behind them and move to Stevenage.

“There is not much going on in Stevenage but I felt safe,” he added. “I slowly let my guard down. Every day in south London I’d walked around with my ‘screw face’. That’s my street face, you have that wall up. But in Stevenage I could relax and grow as a person.” 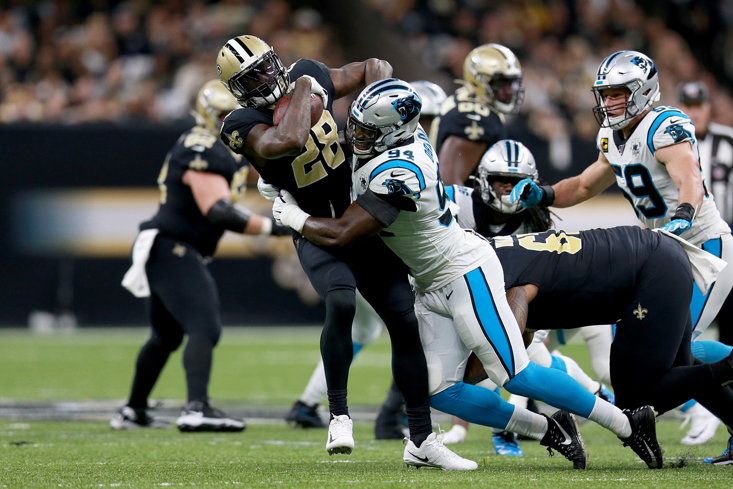 Having got a job at a food warehouse in Welwyn Garden City, it was a chance meeting with a guy called Josh in 2014 that changed Obada’s life forever. The two had met before at college, but Obada noticed Josh had bulked up. It turned out he had got into American football, and was playing for the London Warriors. Obada went along with Josh to practice and soon discovered he had a talent for the game.

After impressing at the Warriors, the team’s defensive co-ordinator, Aden Durde, believed it would be worth recommending Obada to the Dallas Cowboys, where Durde had previously been an intern. Despite having only played five times for the Warriors, Obada had something the Cowboys liked so they signed him as a free agent.

He never did make it into an NFL game with the Cowboys, nor with the Kansas City Chiefs or Atlanta Falcons as he bounced from club to club for a while, but when he was signed by the Carolina Panthers in 2017 he finally found a home. 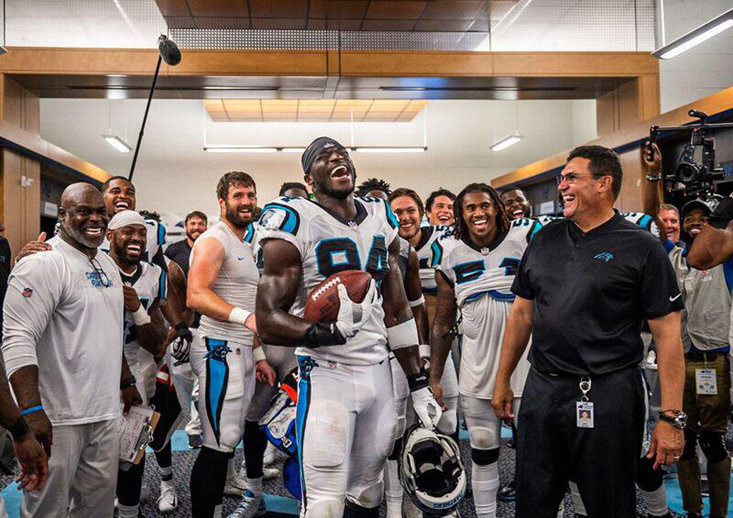 In 2018, after all the trials and tribulations, Obada made his NFL debut in a 31-21 victory against the Cincinnati Bengals and would play 10 of the remaining 14 games of the Panthers’ campaign. Last season he played in all 16, including the 37-26 win over the Tampa Bay Buccaneers in front of his fellow British fans at the Tottenham Hotspur Stadium.

Ron Rivera, his Panthers head coach in those first two seasons, believes his background has made a massive difference. “He practices 100 miles per hour,” Rivera told reporters last year. “I got some guys, they get upset with him because in walkthrough on Fridays he’s going hard. But you say to the guys, ‘Hey, if you came from where he came from, if you dealt with what he dealt with, that’s the way you’re going to approach everything in life.’”

Earlier this year he had a new challenge to face in the shape of Covid-19. At home in England during the off-season and with travel restrictions tightening by the hour, Obada had to make the choice between staying in the UK with his vulnerable wife, who has an autoimmune disorder, or heading to the Panthers’ facility in Charlotte early in case the pandemic made it impossible for him to travel at a later point. He chose the latter, knowing that the time apart would be worth it if he could earn a place on the 53-man roster and thus provide for his family for that little bit longer.

An emotional rollercoaster followed as first he was selected for the team to start the 2020 campaign but then found himself released as part of the waiver process. But within two days he was re-signed, and he has since re-established himself in the Panthers team.

Now 28, under a new coach, and with a reworked Carolina squad aiming to upset the applecart in the NFL, Obada is proving to be one of the great success stories the sporting world has to offer.