Football
Features
There has been a real development in José's character since he took to Instagram
Jack Porter
16:00, 03 Dec 2020

It’s 20 years now since José Mourinho first tried his hand at football management. A journey which began with an ill-fated spell at Benfica at the start of the new millennium has led to him being a bright Lilywhite in North London, via Porto, Chelsea (twice), Real Madrid, Internazionale and Manchester United.

And that has brought character development. While for many the perennial winner of old had been replaced by a bitter, less relevant shadow of his former self, Mourinho has a new glint in his eye now that he’s living in the comfort and luxury of the £1bn Tottenham Hotspur Stadium.

“Plenty more to come…” is the message. That’s from the man himself on Instagram, where he has expertly cultivated Mourinho Mark Two.  We’ve already seen the long-awaited Amazon doc ‘All or Nothing’ which chronicled Spurs’ 2019/20 season and had José telling his players that  “for 90 minutes you cannot be nice, you have to be a bunch of  c*nts, intelligent c*nts not stupid c*nts, bastards!”

But his Insta game has shown him in a completely new light. This is José with a thoroughly 21st Century cultivated sheen. If you thought you knew Mourinho before he joined Instagram, you clearly had a hell of a lot to learn.

In the summer transfer window, Mourinho stole a march on his former club, Man Utd, by swiping defender Sergio Reguilon from Real Madrid from under the Red Devils’ noses. The Spanish left-back had extra incentive to keep a clean sheet recently though, with the gaffer himself paying for a hefty piece of ham. Reguillon’s jamón was a gift from Mourinho for not letting Riyad Mahrez dribble past him in their match against Manchester City. “A promise is a promise. It costed [sic] me £500 but I keep my promises,” Mourinho stated, next to a picture of the pair positively beaming. Most telling of José’s sunny outlook at Spurs was him marking his one-year anniversary as Tottenham’s head honcho, ‘Happy like the first day. #COYS.’ He’s also very happy when he’s playing with a new pair of shoes, apparently. 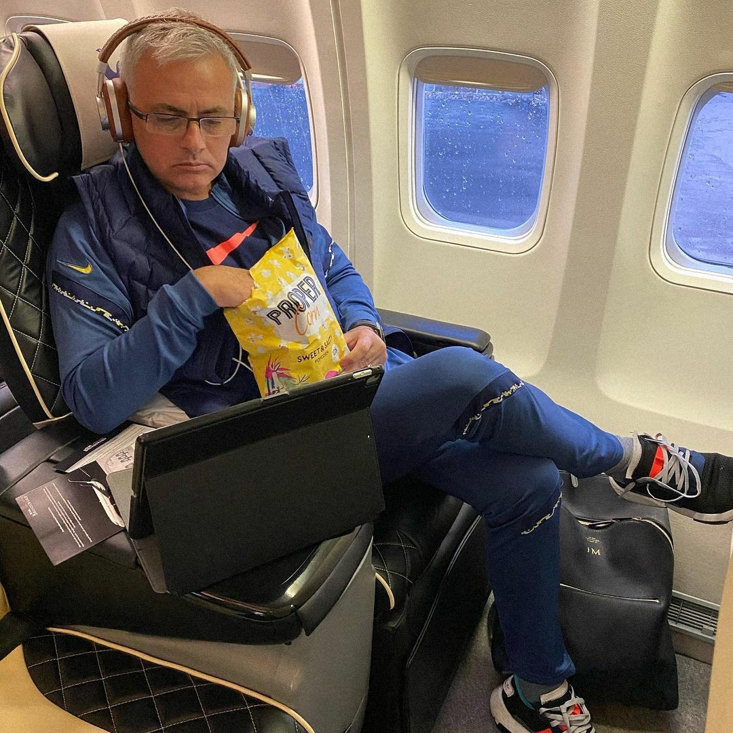 The manager really does relish his moments to have a good munch. He’s proved himself to be partial to the proper popcorn (both sweet and salty to keep the fans happy) whilst on Europa League flights to Bulgaria, Austria and Belgium. And speaking of the Europa League, how do you celebrate “when you win but you don’t play especially well…” By looking completely nonplussed while scoffing down tortilla chips of course.

Where once there was the suave, slicked-backed hair man of many languages with the piercing stare, now there is an old man with glasses on a string and a tracksuit. With Sir Alex Ferguson and Arsène Wenger having long departed the business, and Roy Hodgson heading into his mid-seventies (fair play), the English game is crying out for a new Methuselah-like figure. Who would have thought that could be the once-pugnacious Portuguese? Lest we forget, José is now the fifth-oldest gaffer in the top tier.

And elder statesman status is something he has most certainly embraced, from being unashamed to let his keeper know that he had saved his team a point,  giving a shout to his ‘legend’, his former main man Didier Drogba for winning the Uefa President award, or informing his 1.4m followers that he was delighted with the recognition given to the World Food Programme, for whom he is an ambassador, for their work with Nobel Prize 2020. 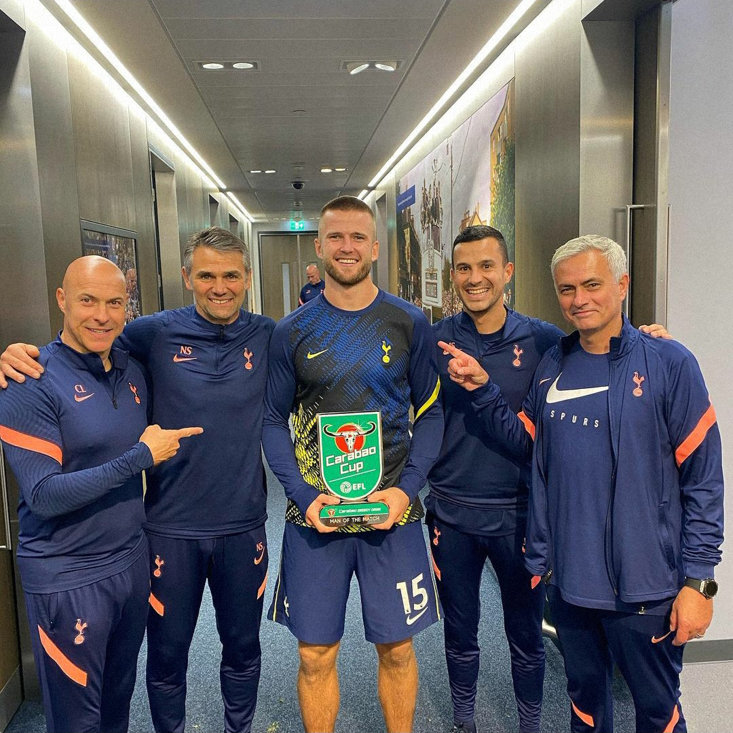 Throughout his two decades at the top, the number of squad squabbles have tallied high alongside the number of Mourinho’s medals. Apparently, not anymore. “Top players are team players.” That’s how Mourinho feels about Tottenham’s talisman, Harry Kane, for whom José has dedicated specific time on his social channel. Kane has, of course, not just been a stunningly good goalgetter once again, but has contributed 11 assists in 16 games so far this season. Eric Dier received a virtual hug upon receipt of a Carabao Cup Man of the Match accolade, despite having played two matches in two days. “Proud of all my players but this one led by example. 180 minutes in 48 hours.”

We all know how José Mourinho set the tone for his relationship with the press and his on-screen persona with that first Chelsea conference to the worldwide media back in 2004. Skip forward 16 years, 16 years of demanding “Respect!”, calling respected contemporaries “specialists in failure”, and keeping it simple by just storming out. However, 2020 Mou tells a different story, with even the 57-year-old pining for the presser. “11 days without a press conference, I missed it” he declared in October, followed by a laughing emoji.

Then there was his response to the result of arguably the game of the season in which his Spurs threw away a three-goal lead to West Ham in N17 within the space of 16 minutes. The Portuguese pictured himself with three balls at the Tottenham training ground. Why? Well, José has let the dear viewer decide. Was it for the three goals they conceded against West Ham? The three “amazing goals” Spurs scored against them? Or…. “the two Europa Leagues I have in the pocket and the 3rd one I am ready to fight for?”