Rugby
Features
It's 20 years since the first staging of the expanded championship and plenty has changed
Ali Stokes
06:55, 21 Jan 2020

Stick the kettle on, put your feet up and treat yourself to a video from the first Six Nations at the turn of the millennium. The first major difference you’re sure to notice is the square picture and that line of static permanently dashing across the bottom of the screen, but beyond the monitor’s dimensions and the stray shot of static, the rugby is a bit different too.

In the age of Six Nations giants - see England’s Maro Itoje or Ireland’s Jacob Stockdale - it is perhaps understandable to assume the players of 2000 were significantly smaller than their modern-day counterparts, with their bulging muscles and elite training programmes. And it turns out the were.

Today's forwards are on average around two centimetres taller, with backs around 5cm taller, and players across the field are five kilograms heavier when comparing the Ireland team gearing up for this year’s Six Nations with the players turning out at the 1999 Rugby World Cup. The fact that professional rugby was still in its relative infancy back in 2000 helps to explain those differences.

It is hard to put an exact number on the definition of players though, even if we can assert that there is a marked difference in tone between 2000 and 2020. The heavy cotton jerseys of yesteryear have given way to a super-light synthetic material that won’t forgive you for letting go over Christmas as its forerunners did. And while players today are more muscular and more substantial, the hefty sleeves of the 2000s gave the impression of abrupt shoulder angles. While today we can see the definition of the upper arm as it slopes inwards from boulder shoulders, the sleeves back in the day hung directly towards the earth, giving French second row Olivier Brouzet the terrifying appearance of a looming human fridge, more so than any of today’s locks.

In terms of the spectacle itself, there are a few key pillars of today’s game missing from that first Six Nations. Chief among them is the much-maligned ‘caterpillar ruck’ currently in vogue – a conga line of forwards behind each ruck to preserve a scrum-half’s time and space before a box-kick – which is conspicuous only by its absence from the 20-year-old footage. Indeed, the art of the box-kick is almost non-existent by comparison, with Peter Stringer running back three paces before putting boot to ball while his Ireland side field a lineout on top of their tryline after a few piercing phases of French attack.

Kicking for field position retains its foothold though, with Ronan O’Gara leading the way with savvy grubbers and chips behind defensive lines.

The ruck is somewhat cathartic viewing for those currently campaigning against the Wild West breakdown in which 120kg monsters launch themselves at almost vertical angles. There are no would-be jacklers with their heads level with their knees. In the 2000s, if you weren’t on your feet, you were on the floor and out of the game. Indeed, it is strange now to watch back as four to six forwards can stand bolt upright, watching as the scrum-half fires the ball away post-melee. Get to work, right?

There have been occasional rule changes over the last 20 years, with a raft of alterations in 2006 having been specifically aimed at adapting to the faster nature of the game.

"Players are fitter, stronger and quicker and therefore the referee's decision-making time gets shorter and shorter," then-referees' chief for the International Rugby Board, Paddy O'Brien told the BBC.

"We wanted to go back to a blank page because we don't believe the laws are keeping up with the modern game. If you read the law book and then watch a match, the game on the field doesn't really reflect the laws. So either you blow the whistle all match and send the spectators out of the ground, or you adapt the laws to the game as it is." 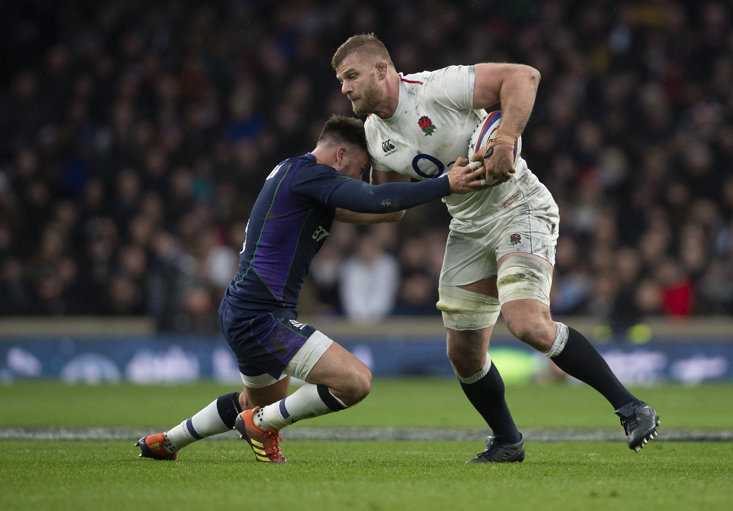 While there is no doubt that the pace of modern Test rugby in full flight outstrips that of the first Six Nations, the older game is a more fluid entity when viewing the bigger picture. Yes, modern defences cut down the time fly-halves are permitted to find their runners, and carriers meet tacklers at frightening levels of G-force, but the time from ruck-to-ruck and whistle to set-piece during the first Six Nations makes for refreshing viewing. A scrum that resets from a disallowed try to engagement within 30 seconds? Wouldn't that be nice?

There can be no doubt rugby union has become bigger and badder over the last two decades, with athleticism and skill, in particular, enjoying sharp rises during the 2010s. If the 2019 Rugby World Cup final taught us one thing, it is that power still wins the day. And with England's Kyle Sinckler, new Welsh call-up Louis Rees-Zammit and the human TNT stick that is Italy's Jake Polledri, we are set to witness even more power and box-office moments of magic as rugby continues its perpetual evolution.

x
Suggested Searches:
Tyson Fury
Manchester United
Marcus Rashford
Lewis Hamilton
F1
Air Jordan
More
boxing
The Day Ali Talked A Suicidal Man Down Off The Ledge Of A Beverly...
Wilshire Boulevard in Los Angeles cuts right through the heart of Beverly Hills. One particularly famous [ ... ]
football
It Is A Miracle Lionel Messi Has Taken 17 Years To React To...
As Lionel Messi trudged off on Sunday, it felt like we were watching the real world in negative form. [ ... ]
football
Liverpool Have Three Weeks To Rescue Their Title Defence After...
It’s Pep Guardiola’s 50th birthday today, and the best gift the Manchester City boss could [ ... ]
horse-racing
Everything You Need To Know About The £5.7m Dubai World Cup...
On 21 January, one of the finest horse racing carnivals in the world kicks off as the Dubai World Cup [ ... ]
football
How Jimmy Hill's Strike Threat Turned £20 Footballers Into Multi-Millionaires
In January 2018, Mesut Özil signed a new contract with Arsenal Football Club. The German midfielder [ ... ]
tennis
The Incredible Story Of Mansour Bahrami, Tennis' ''Most Naturally...
“We are here to entertain,” insists tennis icon Mansour Bahrami. “If you want to be [ ... ]
football
Rafa's Facts, Mourinho's Respect, It's Football's Greatest-Ever...
It was the surest sign yet that Manchester United are back to cause trouble at the top. Jurgen Klopp’s [ ... ]
football
Why Man Utd Remain The Modern Giants, Even If Liverpool Are...
You can tell that football has changed a lot over the past eight years simply from observing some of [ ... ]
motorsport
Elfyn Evans Is Desperate To Make Up For His 2020 World Rally...
“I can’t repeat the exact words and how I felt at the time,” says Welsh rally driver [ ... ]
sports
The Cube, Swingball And The Home-Based Challenges To Get You...
Lockdown is here. Again. Once more the kids are off school and yet again we are left working from home [ ... ]
football
With Nine Teams In The Frame, Could This Be The Most Exciting...
Just four points separate second from seventh in the Premier League table, while leaders Manchester [ ... ]
football
'Big Fish' James Rodriguez Is Exactly Where He Needs To Be At...
James Rodriguez’s career so far has been a great big ‘what if’. Whereas some footballers [ ... ]
sports
''Hold My Beer'' - How Surfer Mikey Wright Leapt Into Action...
“Hold my beer” bellowed Mikey Wright as he tore off his shirt and charged towards the sea. [ ... ]
us-sports
The Headbutts, Fall-Outs And Four-Day Benders That Made Dennis...
They called him The Worm. It may now be over two decades since he last played at the highest level in [ ... ]
boxing
The Skipping, Sushi And 6am Starts Behind Canelo Alvarez's Billionaire...
Saul ‘Canelo’ Alvarez is not only one of the richest sportspeople on the planet, having [ ... ]
sports
Team GB Star Lutalo Muhammad's Guide To Sleeping Like An Olympian
Practice makes perfect, and Olympic athletes spend years honing their craft in pursuit of medal glory. [ ... ]
football
How Cheung Chi Doy Flew Solo To Become Hong Kong's Only European...
Sixty years ago, on 14 January 1961, two teams walked out at Bloomfield Road for a Saturday football [ ... ]
sports
The Top Motivation Tips To Keep Your 2021 Fitness Kick On Course
We are now getting stuck right into January and the new year, and with the first proper weekend behind [ ... ]
football
Remembering Josef Bican, The Only Footballer Cristiano Ronaldo...
It is the perennial argument.. Who is the greatest ever, is it Cristiano Ronaldo or Josef Bican? Ok, [ ... ]
motorsport
Lando Norris' Stunning McLaren 570S, £1.4m Track Test Cars And...
What were you doing at the age of 21? Finishing university, taking the first steps on your career ladder, [ ... ]
darts
Gerwyn Price Would've Quit Darts For A Wales Rugby Union Cap,...
Gerwyn Price dreamed of representing the Wales national rugby team. Life, though, works in mysterious [ ... ]
football
20 Years On, Is Eriksson's England Remembered For The Successes...
It was a time of relative success and front-page scandals. The FA’s decision to appoint England’s [ ... ]
football
Beckham's MLS Move Gets More Monumental Every Year, And Messi...
“I would like to play in the United States someday, it’s always been one of my dreams... [ ... ]
football
Cheers Bud, Messi Pays Respect To The World’s Best ‘Keepers...
Budweiser continues to celebrate Lionel Messi’s record-breaking 644th goal by sending every goalkeeper [ ... ]
football
No More Begging Bowls, Teams Like Marine Should Get 100% Of...
There was an inevitability about the 5-0 away win on the pitch, but Sunday’s third-round clash [ ... ]
sports
The Good, The Bad And The Downright Ugly, What Happens When...
Cardiff City Football Club is one of the most traditional organisations of a deeply traditional sport. [ ... ]
sports
Meet Milly Pickles, The Inspiring Para-Athlete With Five Million...
With five million likes and 204,000 followers on TikTok, and a brand deal with one of the UK’s [ ... ]
boxing
The Hard Work, Long Days And Big Meals Behind Tyson Fury's Incredible...
Tyson Fury has found solace in working out, discovering it is the thing that not only keeps him in shape [ ... ]
us-sports
How Kareem Abdul-Jabbar Brought The Lakers' Incredible 33-Game...
He towered at seven feet two inches tall. The sky-hook was in full flow. Once again the Los Angeles [ ... ]
motorsport
Biker Sam Sunderland Won't Let Covid-19 Kill His Dream Of Another...
It was back in 2017 when Sam Sunderland wrote his name into the record books, becoming the first Brit [ ... ]