It was a night when Dorking Wanderers saw their dreams dashed by Hayes and Yeading, Stratford made some club history, and Buxton reached the first round proper for the first time in 59 years.

And even the 12 FA Cup 4th round qualifier replays contested on Tuesday evening may have been eclipsed for drama by the one that wasn’t – but more on the floodlight fiasco at the Yate Town v Dover Athletic tie later.

If you haven’t been to watch two non-league teams bidding to make it into the draw where the League One and Two clubs enter the fray in the most famous domestic club knockout competition in the world recently, put it in the diary for next season.

At the SkyEx Community Stadium, Hayes and Yeading and upwardly mobile Dorking produced a second 2-2 thriller in four days, this time after 120 minutes. Following a tremendous exhibition of skill, determination and fitness in foul monsoon conditions neither side deserved to miss out on the prize of a home tie with Sutton United, and certainly not via a penalty shootout.

In a breathless game where both teams went 100 per cent for the win the goals for Hayes came from talented 18-year-old Tyler Goodrham, on loan from Oxford, and Francis Amartey while Alfie Rutherford and Barry Fuller twice levelled the scores for Dorking.

But the penalty heroes for Hayes were Tyla Dickinson, brought in on an emergency loan from Wycombe Wanderers after three Hayes keepers were out through injury or self-isolation - who came up with a big save when it mattered most, and then sub Scott Shulton who cracked home the winning kick.

At the end the Hayes players celebrated wildly with the majority of the crowd of 468 as the rain continued to lash down and the chant went up:

We’re the famous Hayes and Yeading and we’re going to Wembley.

It meant a lot to be back in the first round proper, just as it did to the devastated visitors to miss out as they dispiritedly trooped off to the dressing room.

The story of Dorking with their rapid ascent from park football and 12 promotions in 19 completed seasons had captured the imagination. But they and manager, chairman and founder Marc White must wait a little longer for that FA Cup first-round debut.

Dorking Wanderers FC
@DorkingWDRS
Hayes & Yeading win the penalty shoot out 4-3
Just not Wanderers night in the end, good luck to @HYUFC_Official
in the next round.
#EmiratesFACup 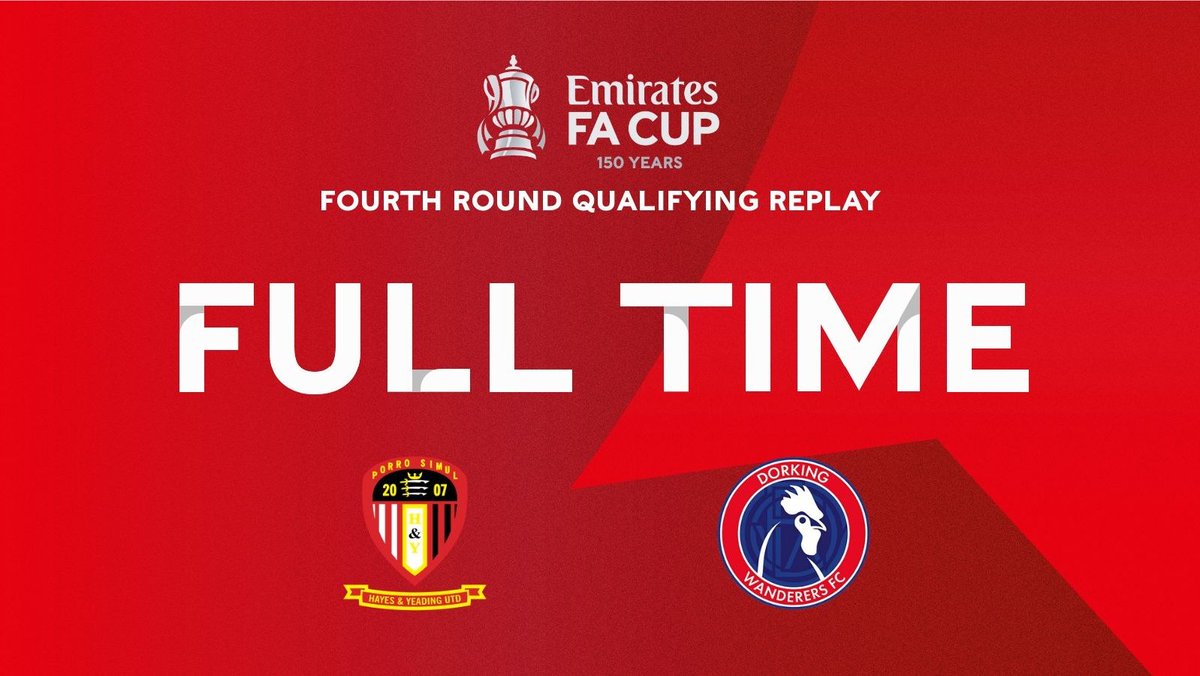 And it is Paul Hughes, manager of Southern League Premier Division South Hayes - whose playing career saw him a highly-rated youngster at Chelsea squeezed out by the arrivals of Gus Poyet, Didier Deschamps and Roberto Di Matteo – whose team are into the first round, the first side ever from Step Three to do that three years in a row.

The big history-makers were Stratford Town, of the Southern League Premier Division Central, breaking their duck and finally getting through to the first round with a thrilling 3-2 upset victory over National League North outfit Boston United.

Any team hailing from the birthplace of William Shakespeare should be able to pull out a performance on the big stage and The Bards, with Jaanai Gordon bagging a brace, recovered from seeing a two-goal lead disappear against their more illustrious opponents to snatch a 77th minute winner through Will Dawes at Knights Lane - earning a home tie with Shrewsbury Town.

And Buxton, of the Northern Premier League Premier Division, and who had a floodlight failure scare of their own in extra time, came through 3-1 against Kettering Town of the higher National League North to get to the first round for the first time since 1962.

It may not exactly confer the sort of altitude advantages enjoyed by international teams in Peru and Bolivia, but nevertheless the Silverlands ground in the Derbyshire spa town famed for its spring water from the Peaks is the highest in England at 1,000 feet above sea level. And whether it was that or something else, Kettering folded in the additional 30 minutes – succumbing to two goals from Italian forward Diego De Girolamo for the ecstatic Bucks.

Buxton Football Club
@Buxton_FC
Bucks through to face York City in the 1st round proper on November 6th
58 years of hurt come to an end.
51
565

Just as Dorking could not lay down a new marker for FA Cup progress, the same fate befell Marske, Pontefract Collieries and Morpeth. They all lost at the final hurdle to Gateshead, FC Halifax and York – the 1955 semi-finalists who now host Buxton - respectively.

In the two other ties decided on penalties Yeovil Town prevailed over Weymouth, and St Albans saw off Corinthian Casuals and next host Forest Green Rovers. Notts County, former winners of the competition albeit two centuries ago in 1894, thumped Tamworth 4-0 and now travel to Rochdale.

National League Wrexham have had their FA Cup moments notably three quarter-finals and also the famous 2-1 win over Arsenal in 1992 with goals from Steve Watkin and Micky Thomas. And they got through with a 2-0 win over Marine, who got to the third round last season before losing 5-0 to Tottenham. There were also wins for Eastleigh at Folkestone Invicta, and Guiseley against Brackley.

But there was controversy, anger, frustration and recrimination at Lodge Road where Yate Town of Gloucestershire were due to take on Dover Athletic. Failure in two of the floodlights saw the kick-off delayed, and as the minutes ticked by the problem became ever graver.  The responsibility to have the stadium in working order at the specified time, even given the inclement weather and chance of water in the electrics, would clearly seem to be with the home side – a view implied in Dover’s later statement.

It will certainly be interesting to see what action if any the FA decide to take. Dover will not welcome having to come back another night, and you certainly had to feel for the 40-50 of their fans who made the 400-mile round trip.

A Dover statement read: “We were warming up for tonight’s FA Cup tie when the referee questioned why some of the floodlights were not working. We stood in the pouring rain for two hours while he set three deadlines, all of which were missed. The referee called the game off at 8.30pm.”

However a Yate Town statement attempted to put the blame on the visitors, saying their own team was ready to play. It read: “At 8.34pm the lights were fixed, however Dover stated that it was past the 8.30pm deadline and therefore they were not prepared to play.”

x
Suggested Searches:
The Sportsman
Manchester United
Liverpool
Manchester City
Premier League
More
boxing
On This Day: Sugar Ray Leonard Edges Past Marvin Hagler In Titanic...
"How do you like it, how do you like it?!"   The commentator's words rang out [ ... ]
football
''I Believe In Fairies'' - The Life And Times Of The Extraordinary...
Brian Clough wasn’t just one of the most quotable managers in English football’s long history, [ ... ]
football
Rangnick Right About Fourth Being United's Ceiling, But He Shouldn't...
"We want to finish fourth in the league, this is the highest possible achievement we can get.” [ ... ]
boxing
Angelo Dundee: Three Masterpieces From Boxing’s Greatest Trainer
Perhaps the greatest cornerman of all-time, Angelo Dundee guided the careers of sixteen world champions [ ... ]
boxing
The Day Ali Talked A Suicidal Man Down Off The Ledge Of A Beverly...
Wilshire Boulevard in Los Angeles cuts right through the heart of Beverly Hills. One particularly famous [ ... ]
boxing
From Broadway To Hostage Negotiation: Ali's Best Moments Outside...
Muhammad Ali transcended the world of not just boxing, but sport as a whole, like no other athlete who [ ... ]
football
Zaha's Double, 1989 And 'Poogate': Inside The Brighton v Crystal...
This article first appeared in The Sportsman on 27th September, 2021 Crystal Palace against Brighton [ ... ]
boxing
George Foreman’s Faith: How The 45-Year-Old Heavyweight Stunned...
George Foreman swept through the heavyweight division like a hurricane, obliterating nearly all who [ ... ]
boxing
Last Round, Folks: When Boxing’s Invisible Champion Was Blitzed...
History has not been kind to Floyd Patterson. Countless world champions have drifted through the annals [ ... ]
boxing
The Life And Times Of Heavyweight Legend Jack Johnson
What do Alan Turing, The Doors frontman Jim Morrison and the comedian Lenny Bruce have in common? These [ ... ]
boxing
Pacquiao: From Poverty-Stricken School Drop-Out To Eight-Weight...
"I knew without a doubt I would become a fighter - I knew that the underdog can, and often does, [ ... ]
sports
Hulk Hogan, Mr. T And Madison Square Garden's Five Greatest...
It’s named after the fourth President of the USA. It’s where George Harrison had his concert [ ... ]
snooker
VR Mishaps, Pig Farms And American Hustles: When Ronnie O’Sullivan...
As it's snooker legend Ronnie O'Sullivan's 46th birthday, we thought we'd take [ ... ]
sports
Meet The Man Who Climbed Everest, Partied For A Week, Then Climbed...
This article first in The Sportsman on 08/12/19 There’s nothing normal about Nirmal Purja. After [ ... ]
motorsport
Frank Williams - A Formula One Pioneer Whose Team Went To The...
For much of the 1980s and 90s, Williams Racing was the biggest name in Formula One and Frank Williams [ ... ]
football
How Cantona Made Manchester United The Dominant Force Of The...
It started with Leeds United making an enquiry about signing Denis Irwin and finished with Manchester [ ... ]
football
Almost 30 Years Since THAT Goal, Davide Gualtieri Is Still San...
8.3 seconds, 28 years ago. That’s all it took for part-time footballer, part-time computer [ ... ]
boxing
River Wilson Bent Talks Coventry City, Newborn Baby And British...
“Imagine if Coventry City made it to the Premier League and I brought the British title home for [ ... ]
football
Neil Warnock - The Record Breaking Football Lover That Just...
When the whistle blows at Kenilworth Road for Luton Town's home match against Middlesbrough on Tuesday [ ... ]
football
Leicester's City Progress Is Proof That Vichai's Vision Has...
On this day three years ago Leicester City lost their influential owner, Vichai Srivaddhanaprabha in [ ... ]
rugby-league
The Birth Of The Grand Final: Rugby League's Biggest Of Big...
“I’ve said it for years… the last game of the season should be the most important,” [ ... ]
football
Celebrating Arsenal's Invincibles With The Stats That Tell The...
There’s Sergio Agüero winning it in Fergie time. Liverpool finally ending 30 years of hurt [ ... ]
football
From Balotelli To Bullard, The Premier League's Greatest Ever...
It's been a full decade since Mario Balotelli lifted his shirt in Manchester City's 6-1 [ ... ]
motorsport
On This Day: Rookie Lewis Hamilton Loses F1 Title In Controversial...
On this day in 2007, we witnessed perhaps the greatest end to a Formula One season we have ever seen. [ ... ]
motorsport
How Lauda's 140mph Crash Marked The End Of The Age Of Innocence...
There are few worse moments to lose control than when driving at 140 miles per hour. The events on just [ ... ]
us-sports
Celebrating Jim Brown - The NFL Movie Giant Who OJ Robbed Of...
Before OJ there was the OG. The Original Gangster. In fact he was front and centre of an action-packed [ ... ]
football
Sheriff Tiraspol - The Champions League Club With Two Faces
On the surface, it has been the underdog story of the Champions League so far. Never before has a club [ ... ]
boxing
From Taming Tyson To Bashing Buster, Evander Holyfield’s Best...
Today marks the 59th birthday of one of the best boxers to lace up a pair of gloves in the modern [ ... ]
football
Fernando Torres - Atletico's Local Hero, Liverpool's Tainted...
‘This means more’ is Liverpool’s oft-derided motto, but when they face Atletico Madrid [ ... ]
football
On This Day In 1987: The Rangers v Celtic Shame Game
Whatever the circumstances when Rangers face their Glasgow neighbours Celtic the [ ... ]